UK announces 684 more coronavirus victims today: Total death toll reaches 3,605 and more than 38,000 people have now tested positive for the infection as Matt Hancock warns there could be 1,000 deaths per DAY by Easter

The UK has announced 684 more coronavirus deaths today, taking the total number of fatalities to 3,605.

Yet again the number is a record one-day high – this has been the case almost every day this week, with each day since Tuesday announcing more victims than the last.

Yesterday there were a record 569 new fatalities announced by the Department of Health and today’s statistics show a rise 20 per cent larger.

The new numbers mean the number of people dead from COVID-19 in the UK has risen five-fold in a week, from just 759 last Friday, March 27.

The numbers behind the UK’s crisis have escalated rapidly over the past seven days and Health Secretary Matt Hancock today admitted that next week is likely to be worse still and could top out at more than 1,000 deaths per day by Easter Sunday.

Britain is still being hammered by the consequences of huge numbers of people catching the coronavirus before the country went into total lockdown last week.

Experts say it could take another couple of weeks before the benefits of social distancing start to show in NHS statistics – but they insist that the outbreak will taper off and the daily numbers will start to fall.

And insiders say the NHS, by and large, is coping well with the strain so far and there are still intensive care beds and ventilators available for patients who need them. 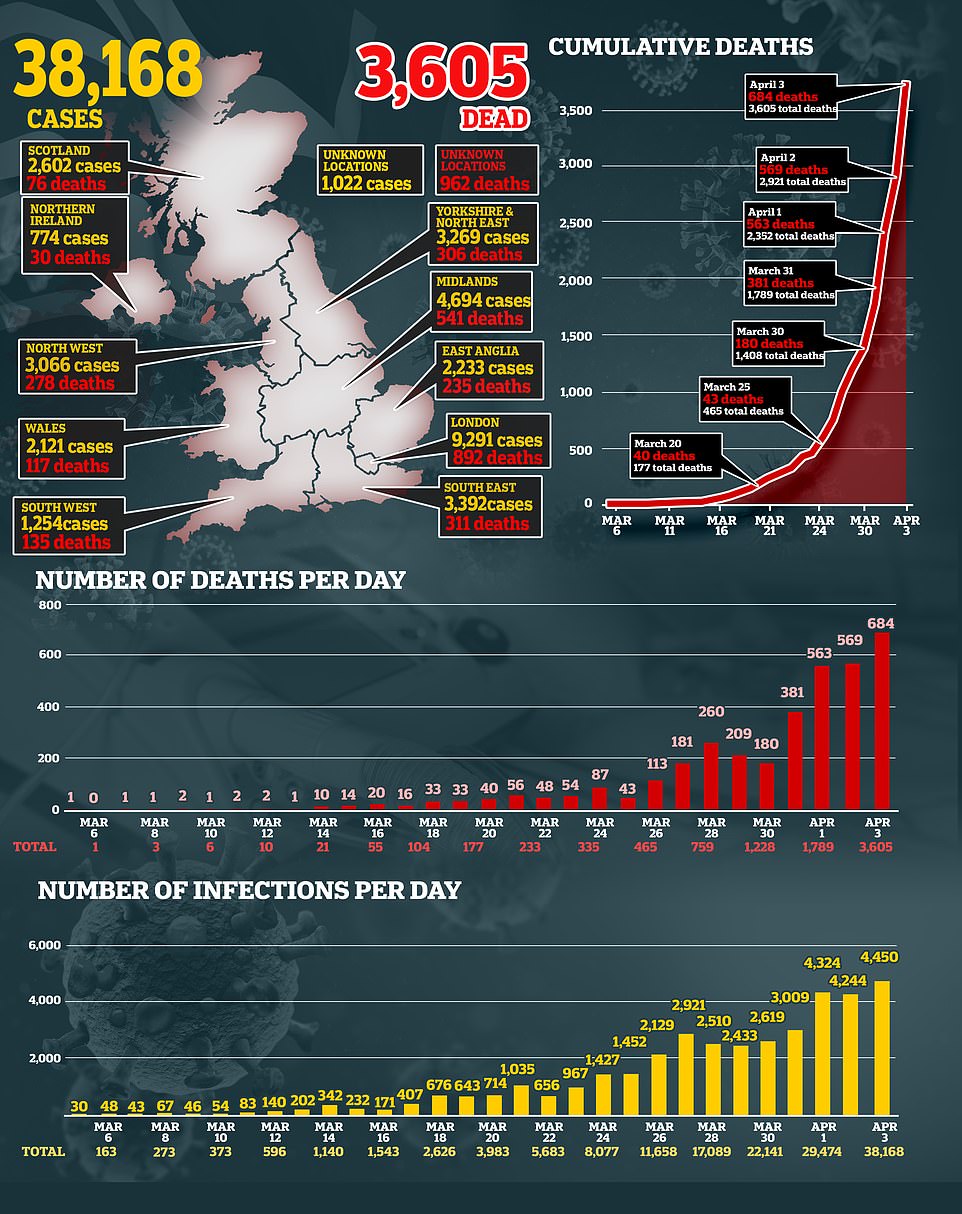 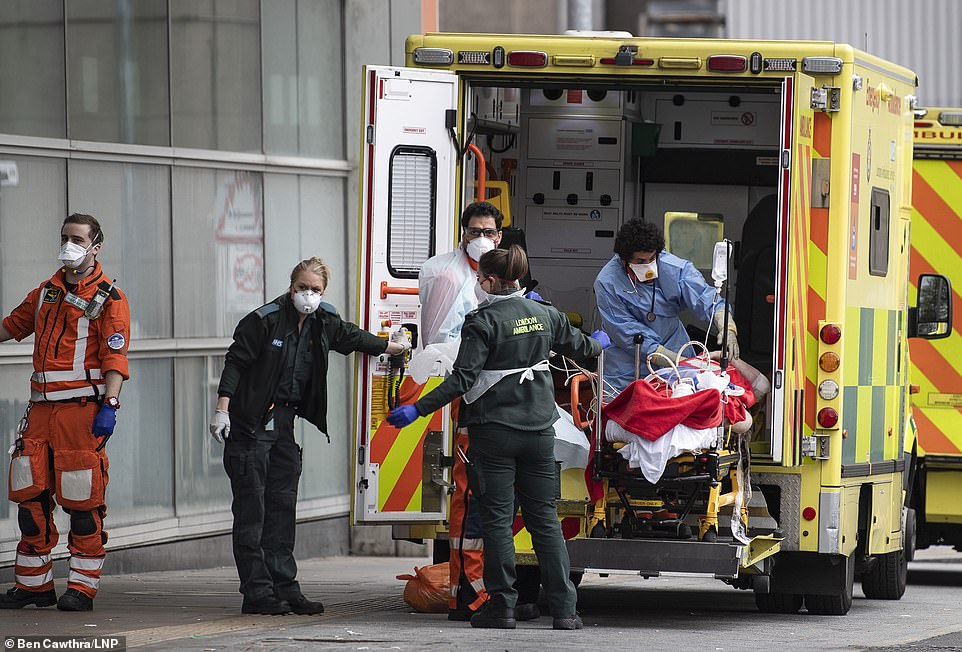 The UK’s coronavirus outbreak is expected to get worse before it gets better, Health Secretary Matt Hancock has said (Pictured: Paramedics working in London)

Public Health England said 173,784 people have now been tested for the coronavirus – 7,651 people were tested yesterday, Thursday, a total of 11,764 times.

In Scotland, which was the first country to announce its statistics today, there are 176 people are in intensive care with the disease or expected to have it, a rise of 14.

First Minister Nicola Sturgeon said in her daily briefing: ‘I want to be very clear that nothing I have seen gives me any basis whatsoever for predicting the virus will peak as early as a week’s time here in Scotland.’

Health Secretary Matt Hancock yesterday pledged to boost the UK’s coronavirus testing capacity to 100,000 tests per day for swabs to see whether people are currently infected with the virus.

Number 10 U-turned on its testing policy when it abandoned the previous centralised approach by health chiefs and finally invited the wider science and medical research sectors to help, with private labs now joining the effort to process thousands of swab tests.

The Francis Crick Institute, a prestigious research centre in London, became the first high-profile lab to reveal it was testing NHS staff from local hospitals.

Other labs in privately-run science centres and universities are now expected to join in the effort to massively boost capacity.

But Mr Hancock has been forced to admit his pledge to boost COVID-19 testing capacity to 100,000 per day by the end of April did not include antibody kits, which are seen as crucial to getting the UK back up and running because they can reveal who has had, and is now immune to, the coronavirus.

She said Scottish Government’s targets on testing are proportionally equal to what is being done in the rest of UK, although the expansion to allow 3,500 tests per day in Scotland is slightly higher proportionally.

UK Health Secretary Matt Hancock said they plan to carry out 100,000 coronavirus tests a day in England by the end of April.

The Scottish Government is looking at how antibody testing  – which can tell if a person has previously had the virus – can move Scotland out of lockdown, although the test does not currently exist in a ‘reliable form’, the Ms Sturgeon added.

A testing oversight group has been set up by the Scottish Government, she announced, which has been tasked with monitoring the provision of tests for the disease.

The group will be responsible for the increase in capacity of the labs in Scotland, along with the Scottish side of the delivery of the UK initiative to allow ‘non-NHS testing’.

Ms Sturgeon also announced that vulnerable people who are ‘shielding’ from the virus for 12 weeks will be able to receive deliveries of food and other essential items through a text messaging service.

She said 8,000 people had already signed up for the initiative and encouraged more to register.

The First Minister said childcare services would remain open during what would have been the Easter holidays.

The provisions may be different than during term time, she said, but she assured key workers that children would be looked after throughout the holiday period.

‘This will be a holiday period unlike any we’ve had in our lifetimes,’ the First Minister said.

She said: ‘I have not been able to find that the peak will be as soon as we’re hearing in the media today.

‘Now is now the time to think that perhaps it will all be over soon.

‘We have always said that many months will be needed before we can get on top of this virus and be sure that we’re not going to have a worse scenario later.’

She added: ‘At the moment we will not be able to give a clear date of when the peak will be.

‘What we will look for first is a slowing of the rate of people testing positive and we are not seeing that yet.’

Ms Calderwood also said it was looking less likely summer holidays will take place this year as they have done previously.

She said: ‘What we are already seeing in some countries across the world is that when measures are lifted, the cases jump up almost immediately.

‘I would not be thinking that summer holidays are likely to be as they were in the past but we really don’t know.’

Also speaking at the briefing, Health Secretary Jeane Freeman said there are 500 ventilators across the NHS in Scotland.