Tropical heatwave to hit Britain with 90F highs by Wednesday

Britain is set for a heatwave next week as tropical air pushes temperatures towards 90F (32C) in a dramatic change from the thunderstorms and heavy rain that have blighted much of June so far.

The hottest weather is expected midway through next week in southern England, with the mercury set to rise from 72F (22C) on Monday to 81F (27C) on Tuesday and then hit the peak on Wednesday and Thursday.

But there is more bad weather to come before then – with Scotland facing thunderstorms and more than an inch of rain in two hours this afternoon, and parts of England expecting showers on Sunday morning.

This weekend will be unsettled for many areas of the country, but temperatures of up to 73F (23C) are expected in southern England which is expecting warm sunshine on Saturday – the summer solstice – and Sunday afternoon.

The Met Office has also warned hayfever sufferers that grass pollen will give high or very high pollen levels in the coming days – especially in Cardiff and London by Monday. 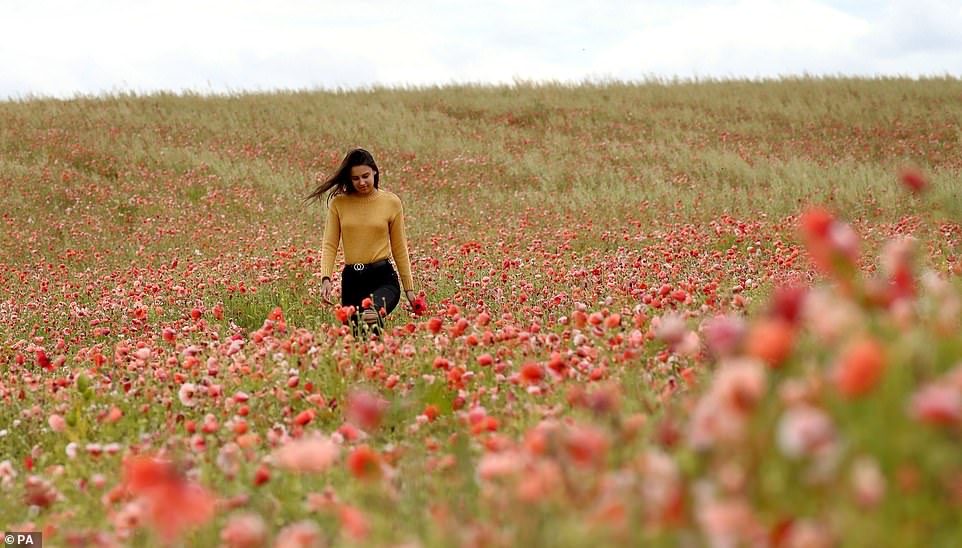 Isla Stanton, 13, walks through a field full of poppies near Faversham in Kent today ahead of next week’s expected heatwave 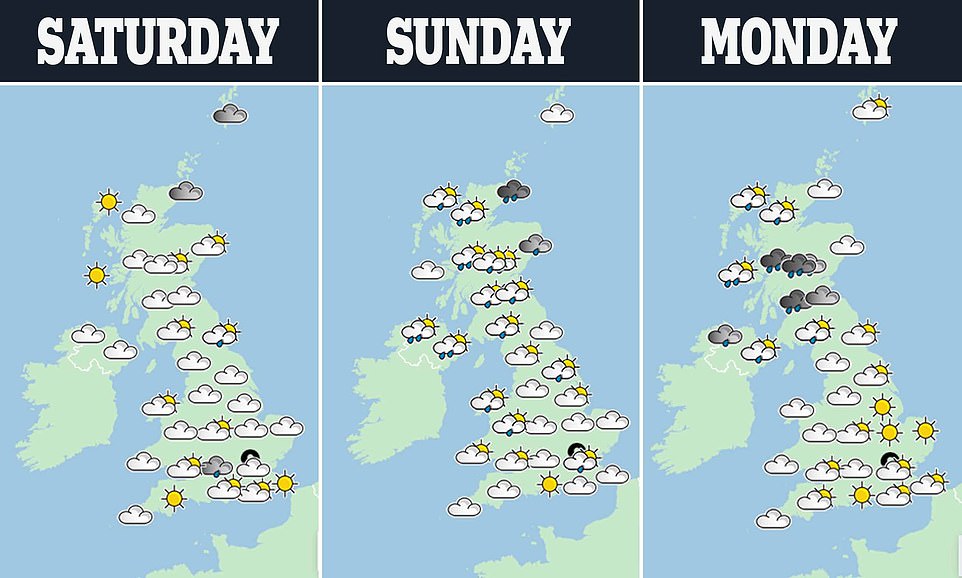 Met Office chief meteorologist Andy Page said: ‘Friday will be cloudy with some bright spells and showers – we’ve issued a weather warning for parts of southern, central and western Scotland where heavy showers and thunderstorms will develop this afternoon and evening. 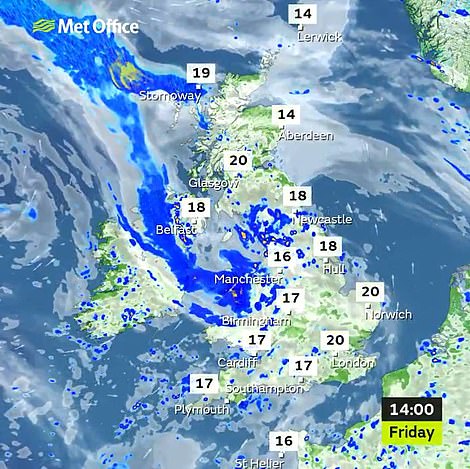 Rain will affect parts of Scotland and northern England today

‘Saturday will be brighter with many of us enjoying a dry day with warm sunshine and just a few isolated showers. A band of rain will move east across the UK during Saturday night, clearing Sunday morning.

‘Then it will be another bright day for most on Sunday with sunny spells and scattered showers, these turning heavy across Northern Ireland and Scotland.’

Early next week it will stay unsettled across north-western parts of the UK, but elsewhere it will be warm and dry with temperatures continuing to rise through the week.

Met Office deputy chief meteorologist Martin Young said: ‘By the middle of next week we’ll see temperatures across much of England and Wales widely climbing into the mid to high twenties Celsius and it will probably be hot in parts of southern and eastern England, as temperatures peak close to 30 Celsius.

‘It’s possible Northern Ireland and Scotland will join the rest of the country in seeing a spell of warmer weather later next week, as this hot air from the continent extends northwards across the UK. 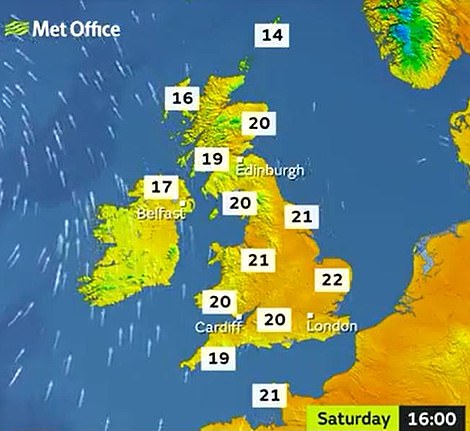 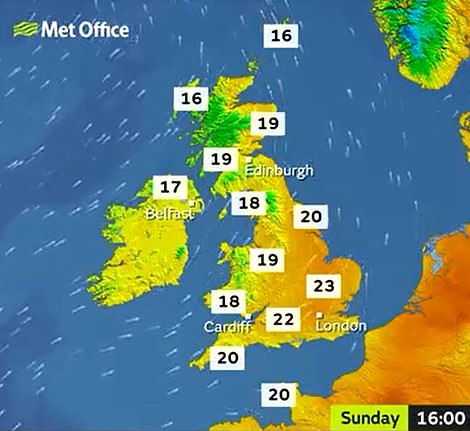 Temperatures of up to 73F (23C) are expected in parts of southern England this weekend, but there could be rain on Sunday 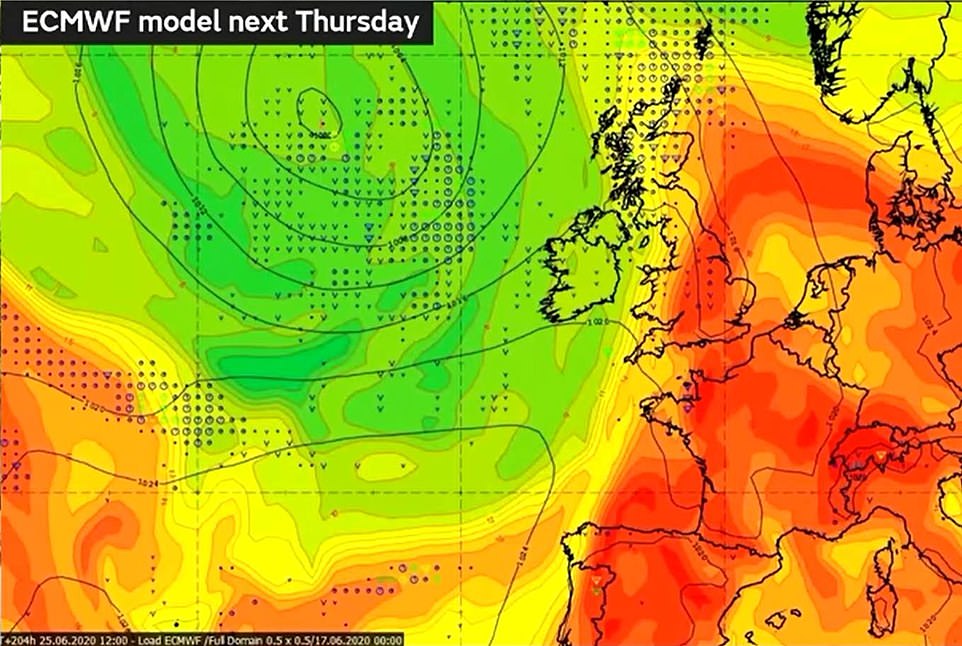 ‘We’re keeping a close eye on the possibility of severe thunderstorms developing later next week too, triggered by the warm continental air.’

It comes after villagers were forced to flee their homes in South Wales after heavy rain flooded them for the third time this year. More than 200 properties across the Rhondda Valley suffered significant flooding on Wednesday.

One of the worst-hit communities was Pentre where houses filled with water – four months after it was hit twice by flooding during Storm Dennis. Elsewhere, locals said flooding in Ilkeston, Derbyshire, was ‘worse than ever’.

Another video shared online by the Environment Agency showed cars driving through a flooded street in Birmingham. Some downpours this week brought up to 1.2in (30mm) of rain within an hour.