Boys in BABY blue! Police officers help deliver baby after driver they stopped told them his wife had just gone into labour

A baby boy was delivered by police officers on Thursday after his father was pulled over when a camera flagged his car for not having insurance.

The baby’s father was captured by a camera as he drove through Northampton – but he told PCs Sandra Payne and James Condon he had just insured his car that morning.

The officers, from Northamptonshire’s Road Crime Team, were with the man when his heavily pregnant wife called him to say she was going into labour.

They quickly drove to his home where PCs Payne and Condon ended up delivering baby Harris just minutes later. 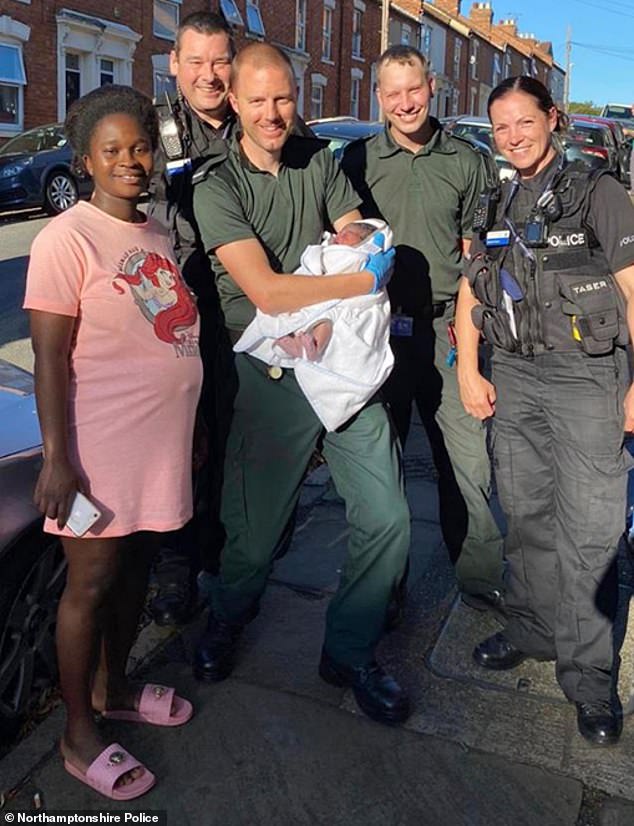 The baby’s father was captured by a camera in Northampton – but he told PCs Sandra Payne and James Condon he had just insured his car that morning. Pictured, the two police officers with the baby’s mother and paramedics

The force wrote on Twitter: ‘An ambulance was called, but baby wasn’t going to wait – he wanted to come out ASAP!

‘A few minutes later, baby Harris arrived, delivered by two of our police officers who were talked through it by the incredible Maternity Ward at Northampton General Hospital NHS Trust.’

They said the baby’s mother was ‘incredibly cool and collected’ during the birth.

And everything was fine with the father’s insurance policy, which he showed to police officers after the birth.

Chief Inspector Tom Thompson, said: ‘Well done Sandra and James – this will definitely be a story baby Harris’ parents will remember for a long time to come.’

Photographs show PCs Payne and Condon holding the tiny bundle in their arms shortly after the delivery. 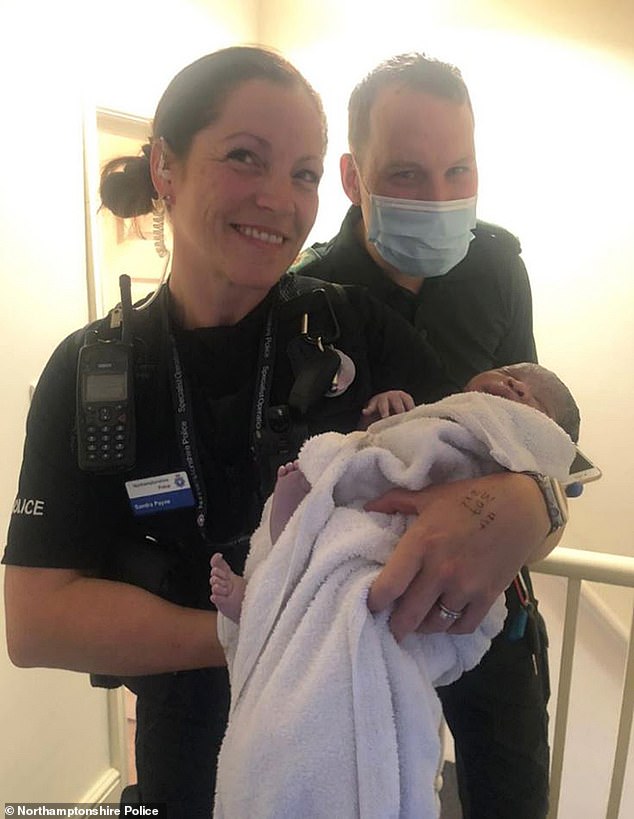 The officers (pictured), from Northamptonshire’s Road Crime Team, were with the man when his heavily pregnant wife called him to say she was going into labour

The officers later posed alongside the baby’s mother, who has not been named, and the two pandemics who helped keep the mother and baby healthy following the birth.

Inspector Thompson added: ‘I would like to extend my thanks to Sandra and James whose actions ensured that baby Harris was delivered into this world safely.

‘This is a great story and an example of how varied life as a police officer can be.

‘As a Force we’re really proud of how both officers managed to keep Harris’ parents calm and looked after until our colleagues at East Midlands Ambulance Service arrived.’

Related posts:
Alex Jones: The One Show host unveils new look: ‘Never thought I’d be this blonde’
Joe Biden delays VP announcement another week
Popular News
Lil Baby To Headline 2022 Days Of Summer Cruise Fest Hosted By DJ Khaled
01/08/2021
Stuart Broad builds up to second Virtual Test with Sri Lanka
26/03/2020
Bindi Irwin Made Last-Minute Changes to Her Wedding Due to Coronavirus Lockdown
26/03/2020
Widow on The Repair Shop leaves viewers sobbing
26/03/2020
Coronavirus lockdown: Global quarantine reveals weird fact about humanity
26/03/2020
Recent Posts
This website uses cookies to improve your user experience and to provide you with advertisements that are relevant to your interests. By continuing to browse the site you are agreeing to our use of cookies.Ok