A shocked student has discovered two chicks tweeting from a bird’s nest inside the crotch of his jogging bottoms after he left them hanging at his dorm for five months.

The pupil, who remains unidentified, made the unusual discovery on his first day back to school after the coronavirus outbreak when he noticed a large hole in the crotch area of his trousers on the laundry rack.

He then heard the young birds chirping and found the grass nest with the chicks and an unhatched egg. 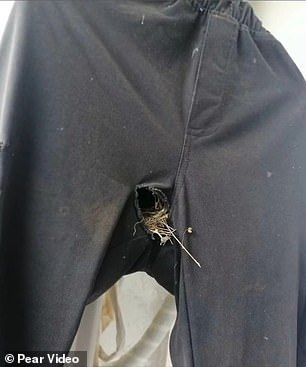 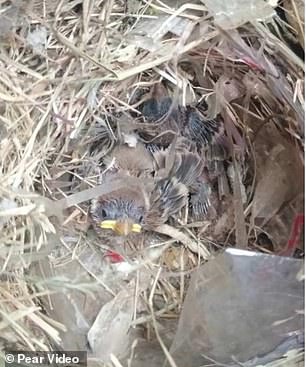 A stunned Chinese student has spotted two tweeting chicks from a bird’s nest inside his jog pants hanging at the dorm after the campus was closed for five months due to the coronavirus lockdown. The pictures above show the animal’s home hidden in a pair of black jog pants

A video filmed by the student Wednesday shows the bird’s nest hidden in a pair of black tracksuit bottoms hanging at the balcony of the dormitory.

The student had left the trousers to dry before his college was forced to shut down amid the virus outbreak.

‘I was like, wow, this is extraordinary. I didn’t think birds could really build their nest in trousers,’ the fascinated pupil told Pear Video.

The incident took place at Anqing Vocational and Technical College in Anhui province of eastern China as students returned to the campus following a five-month school closure.

But the student said that the parent bird suddenly stopped coming to feed the chicks after he discovered the nest.

‘Maybe the weather has been too hot. I don’t know what happened,’ he added.

The pupil tried to give young birds some breadcrumbs to eat but to no avail.

‘They were fine at first but [the chicks] were dying when I went to check again the next day,’ he said.

The student said that he then buried the dead birds somewhere nearby. 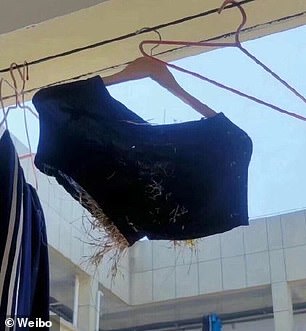 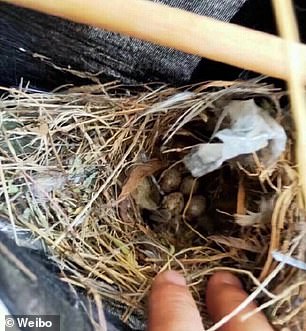 Last month, a Chinese parent also discovered a bird’s nest in a pair of boxers while helping their child move to a dorm at a secondary school in Xiangyang, Hubei province.

A student, who remains unidentified, had allegedly left the washed underwear to dry before the school was forced to shut down amid the virus outbreak.

Social media footage captured a bird’s nest hidden in a pair of black underpants hanging at the balcony of a dormitory. A few eggs can also be spotted at the animal’s cosy home.

Related posts:
Robert Downey Jr. Put His Role As Iron Man 'On the Line' With Marvel and Fought To Get The Avengers More Money
This Week's Top 10 On Netflix: Space Force Arrives For The First Week Of June
Popular News
Boris Johnson told he will be ‘gone after Brexit’ in dire forecast over political future
29/09/2020
Stuart Broad builds up to second Virtual Test with Sri Lanka
26/03/2020
Bindi Irwin Made Last-Minute Changes to Her Wedding Due to Coronavirus Lockdown
26/03/2020
Widow on The Repair Shop leaves viewers sobbing
26/03/2020
Coronavirus lockdown: Global quarantine reveals weird fact about humanity
26/03/2020
Recent Posts
This website uses cookies to improve your user experience and to provide you with advertisements that are relevant to your interests. By continuing to browse the site you are agreeing to our use of cookies.Ok