Secret witnesses to testify about plot to ‘kidnap or poison’ Assange

London: The judge hearing Julian Assange's extradition hearing in London has agreed to hear in secret the evidence of two Spanish witnesses, relating to an alleged plot to kidnap or poison the Australian while he was holed up in the Ecuadorian embassy.

The witnesses were granted anonymity in a court hearing underway in Spain against former Spanish military officer David Morales. The British court heard the pair feared for their safety and that of their families, and were at times under armed protection. 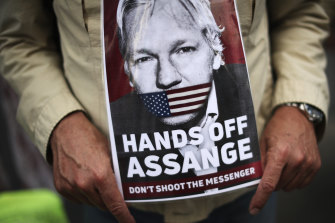 A man holds a photograph of WikiLeaks founder Julian Assange during a protest in Brussels demanding he be freed.Credit:AP

The court was told the pair feared retribution by David Morales, the owner of a Spanish security firm Undercover Global, also known as UC Global, which is accused of spying on Assange while contracted to provide security at the embassy.

Morales is accused of passing information about Assange to a third-party which Italian newspaper la Repubblica has reported as being the CIA.

According to a statement read out by Mark Summers, a QC representing Assange, the pair will detail conversations between "Morales and his American friends" about plans to either "kidnap or poison" Assange.

"What you're going to find is that the man has army connections and a search of his house uncovered loaded firearm," Summers said. 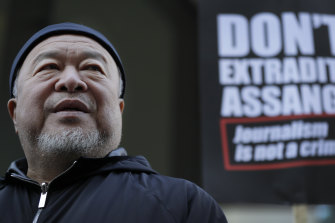 Chinese artist Ai Weiwei supporting Julian Assange outside the hearing at the Old Bailey in London.Credit:AP

Judge Vanessa Baraitser agreed to grant their anonymity even though she said it was "remarkably easy" to identify both as former employees of the firm from evidence already on the record.

She said that "witness one" held a 50 per cent stake in the firm and sold it to Morales in 2019. "How is it possible that Mr Morales does not know who he is?" Baraitser asked the QC representing Assange.

The second witness, Baraitser said, was a former IT worker at UC Global. "How many people does that apply to do you think?"

Summers said that was the key to the witnesses' protection.

"If harm comes to them, it will be frankly obvious from whom it has come. The publication, by contrast, of their names removes that form of protection and we understand that this is something that is well known to the Spanish court," Summers said.

"The knowledge that Morales must have that he is the only one who has possession of their names … at present … is successfully protecting them," he said.

"I'm with you," Baraitser said. "In my view, the genuine need for anonymity comes not so much from a justified fear from the safety of witnesses but from the fact that protection measures for both witnesses have already been granted by a Spanish court."

The United States government would know the true names of the witnesses and would be able to challenge their evidence in private.

But James Lewis, the QC representing the US government, reiterated that the evidence could only be contested in the understanding that the prosecution did not deal with any US agency other than the Department of Justice.

"There is a Chinese wall between the prosecution and any other agencies which may have come into — without confirming or denying whether they have or not — any intelligence or other material," Lewis said.

"It has the consequence that I have no instructions whether what they say is right or wrong, therefore it will simply be put into evidence on that basis," he said.

Assange's long-running extradition hearing is drawing to a close. Final evidence will be given for the remainder of this week but could conclude a day earlier on Thursday.

The judge will not make a ruling on Assange's extradition until after the US Presidential election.

Assange's team is arguing this his prosecution, relating to the publication of more than half a million military and diplomatic cables on the WikiLeaks website a decade ago, is political.

They say that under former US president Barack Obama, the Department of Justice never pursued the 49-year-old. Assange is facing 18 charges that carry a maximum 175 years in jail.

Related posts:
Queen of the South spoilers: Hidden meaning behind key Teresa motorbike scene exposed
Shooting breaks out at Amazon fulfillment center in Florida, killing 1
Popular News
Blue Ivy Carter Stuns Fans With Yet Another Skill up Her Sleeve — Halloween Makeup
25/10/2020
Stuart Broad builds up to second Virtual Test with Sri Lanka
26/03/2020
Bindi Irwin Made Last-Minute Changes to Her Wedding Due to Coronavirus Lockdown
26/03/2020
Widow on The Repair Shop leaves viewers sobbing
26/03/2020
Coronavirus lockdown: Global quarantine reveals weird fact about humanity
26/03/2020
Recent Posts
This website uses cookies to improve your user experience and to provide you with advertisements that are relevant to your interests. By continuing to browse the site you are agreeing to our use of cookies.Ok