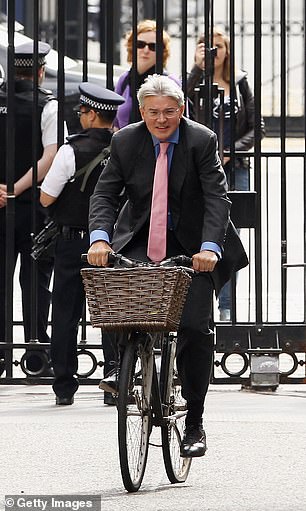 Andrew Mitchell, the Tory MP at the heart of the ‘Plebgate’ row has again sparked fury  by evading a parliamentary pass check on his bicycle (pictured in 2021)

The Tory MP at the heart of the ‘Plebgate’ row has again sparked fury from Westminster security staff.

He was seen cycling around a barrier on Wednesday morning – instead of stopping at the checkpoint to have his Commons pass scanned.

The security official at the checkpoint remarked to another cyclist: ‘Some leopards never change their spots,’ in reference to the Plebgate scandal.

In 2012, Mr Mitchell was alleged to have sworn at police officers in Downing Street who would not let him cycle through the main gate –and, crucially, was accused of calling one a ‘pleb’, which he denied.

He was forced to quit as chief whip and later lost a libel case in which he disputed reports that he used the word ‘pleb’.

Parliamentary staff cycling through the Carriage Gates entrance into the Palace of Westminster stop at the checkpoint to have their pass scanned.

Mr Mitchell, 65, said yesterday: ‘In my experience [the security staff] never lift the barrier because as I come through I look and see if anyone wants to see my pass, and if they don’t I go around the side of the barrier. And I’ve been doing that for years and years and years.’

He added: ‘If ever I am asked to show my pass, of course I always do so promptly.’

Mr Mitchell had shown his pass to police on Wednesday, but did not stop at the checkpoint where passes are scanned by security staff waiting in an adjacent hut.

Mr Mitchell was riding a bicycle similar in appearance to the model he rode during the Plebgate affair, which he later auctioned for charity, raising more than £10,000.

He has always denied using the word ‘pleb’ but in 2012 apologised for being disrespectful to the police.

In 2012, Mr Mitchell was alleged to have sworn at police officers in Downing Street who would not let him cycle through the main gate –and, crucially, was accused of calling one a ‘pleb’, which he denied (pictured, the alleged incident)

In his resignation letter to then-prime minister David Cameron, he said: ‘The offending comment and the reason for my apology to the police was my parting remark, “I thought you guys were supposed to f****** help us”.

‘It was obviously wrong of me to use such bad language and I am very sorry about it and grateful to the police officer for accepting my apology.’

A House of Commons spokesman said: ‘All passholders are asked to wear their security pass visibly at all times on the estate and they should show their pass when asked to do so.’