A picturesque blue lagoon in the lake district that drew tourists to the Peak District has turned completely black after police dumped dye into it to stop Instagrammers posing for snaps amid the coronavirus lockdown.

Photos show the once idyllic pool in a former quarry at Harpur Hill, Buxton, has changed to a miserable black.

Derbyshire Police, who last week tracked dog walkers and ramblers through the hillsides with drones, said it took the action after being told people had continued to congregate near the lake’s edge.

In a Facebook post Buxton safer neighbourhood policing team said: ‘No doubt this is due to the picturesque location and the lovely weather (for once) in Buxton. However, the location is dangerous and this type of gathering is in contravention of the current instruction of the UK Government.

‘With this in mind, we have attended the location this morning and used water dye to make the water look less appealing.’

There are fears that officers decision may backfire and make the location even more appealing for Instagrammers who are keen to capture unusual snaps.

It comes after the same police force was accused of going over the top in their enforcement of the government’s new ‘stay indoors’ rules to protect against the deadly coronavirus. The COVID-19 death toll in the UK soared to 1,228 on Sunday, after a further 206 deaths were recorded in the past 24 hours. More than 19,500 people have been infected in the UK. 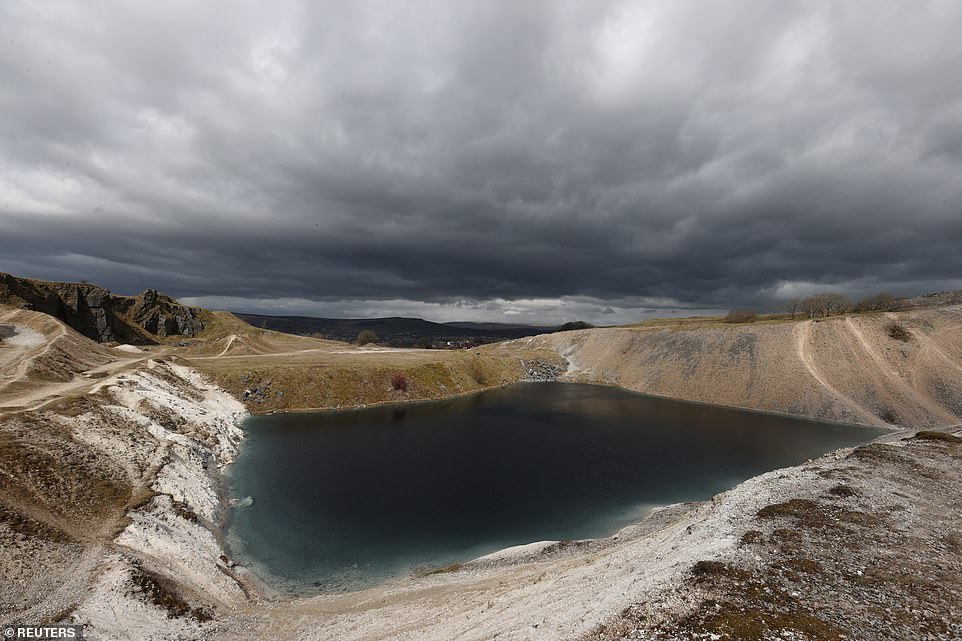 The blue lagoon at Harpur Hill, Buxton, has turned a miserable black after police dropped dye into it to stop Instagrammers 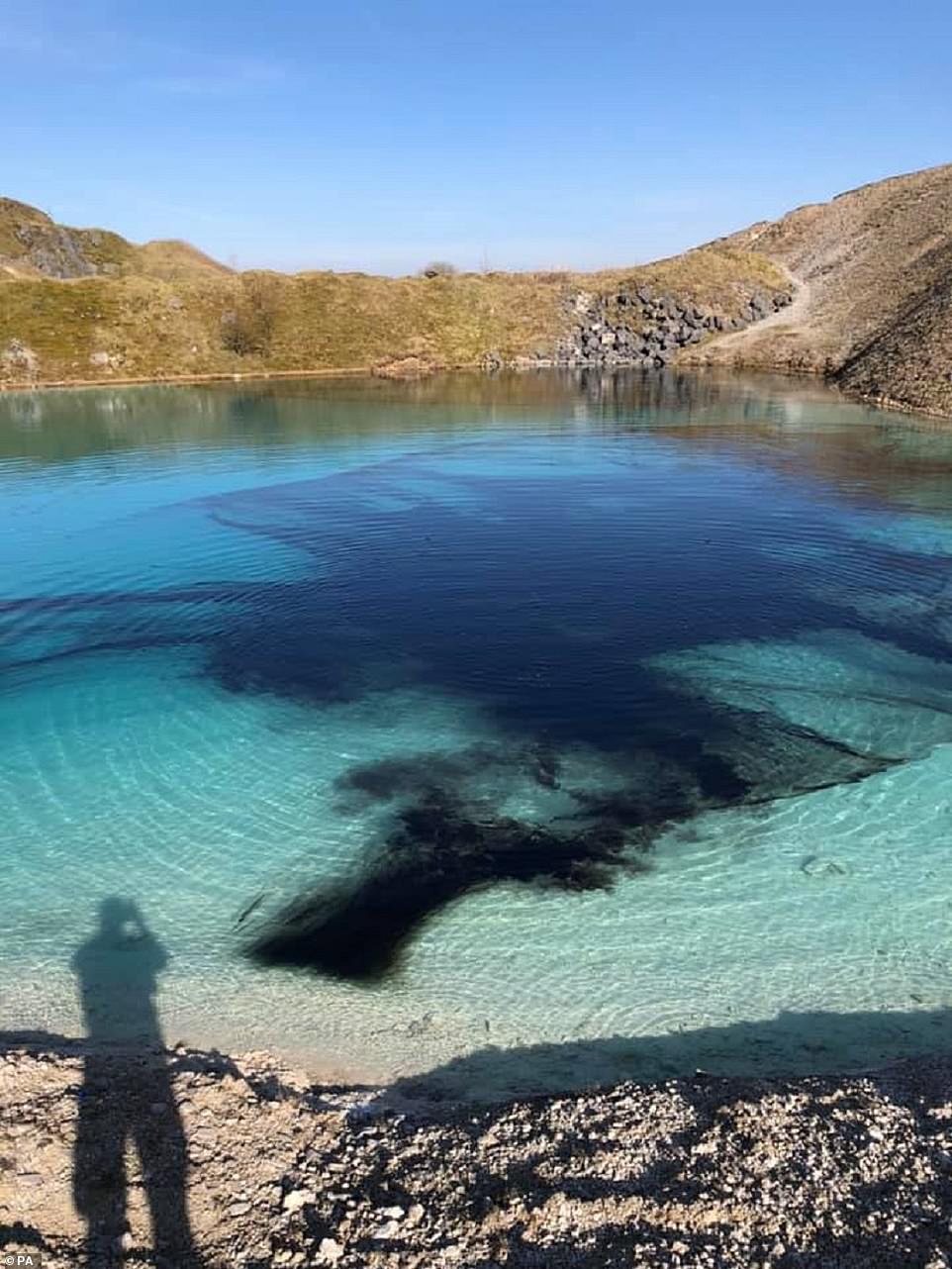 Police officers in Derbyshire have put black dye into the blue lagoon in Hupur Hill, Buxton in order to deter visitors to the area 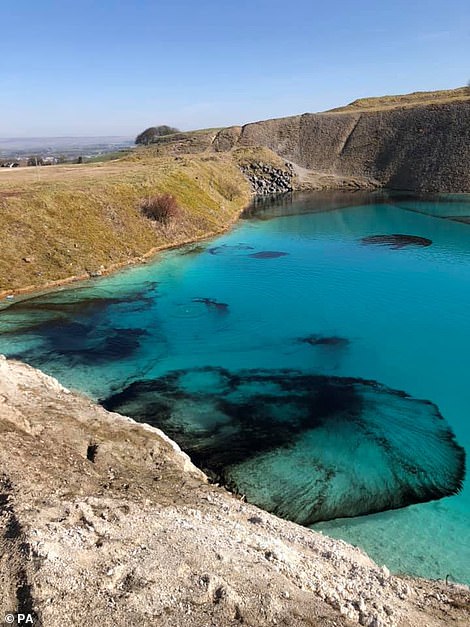 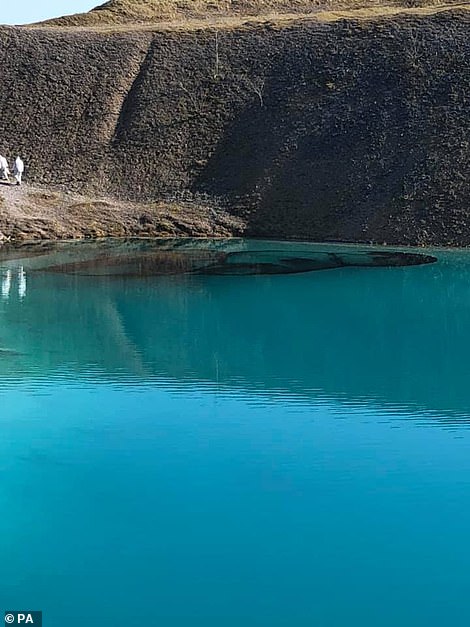 Police received reports that visitors were flocking to the lagoon in Buxton to have photographs taken with the dramatic blue backdrop. Officers warned: ‘No doubt this is due to the picturesque location and the lovely weather (for once) in Buxton. However, the location is dangerous and this type of gathering is in contravention of the current instruction of the UK Government. With this in mind, we have attended the location this morning and used water dye to make the water look less appealing’

The post drew ire from nearby residents who accused the local police force of using an over-aggressive strategy since the outbreak.

Local resident Alex John Desmond wrote on Facebook: ‘This is a joke, the way this force is acting is not representative of policing by consent which is the way the UK is meant to be governed. You should be ashamed of yourselves. You have taken something beautiful and damaged it.’

He added that the force was promoting a culture of ‘shaming’ individuals found outside, claiming that he was shouted at while on his first trip out since lockdown began.

Officers have been given powers to arrest people who are out of their homes on ‘non essential’ journeys, with a three-strike fine policy which starts at £60 for a first offence, rises to £120 for the second and reaches £1,000. 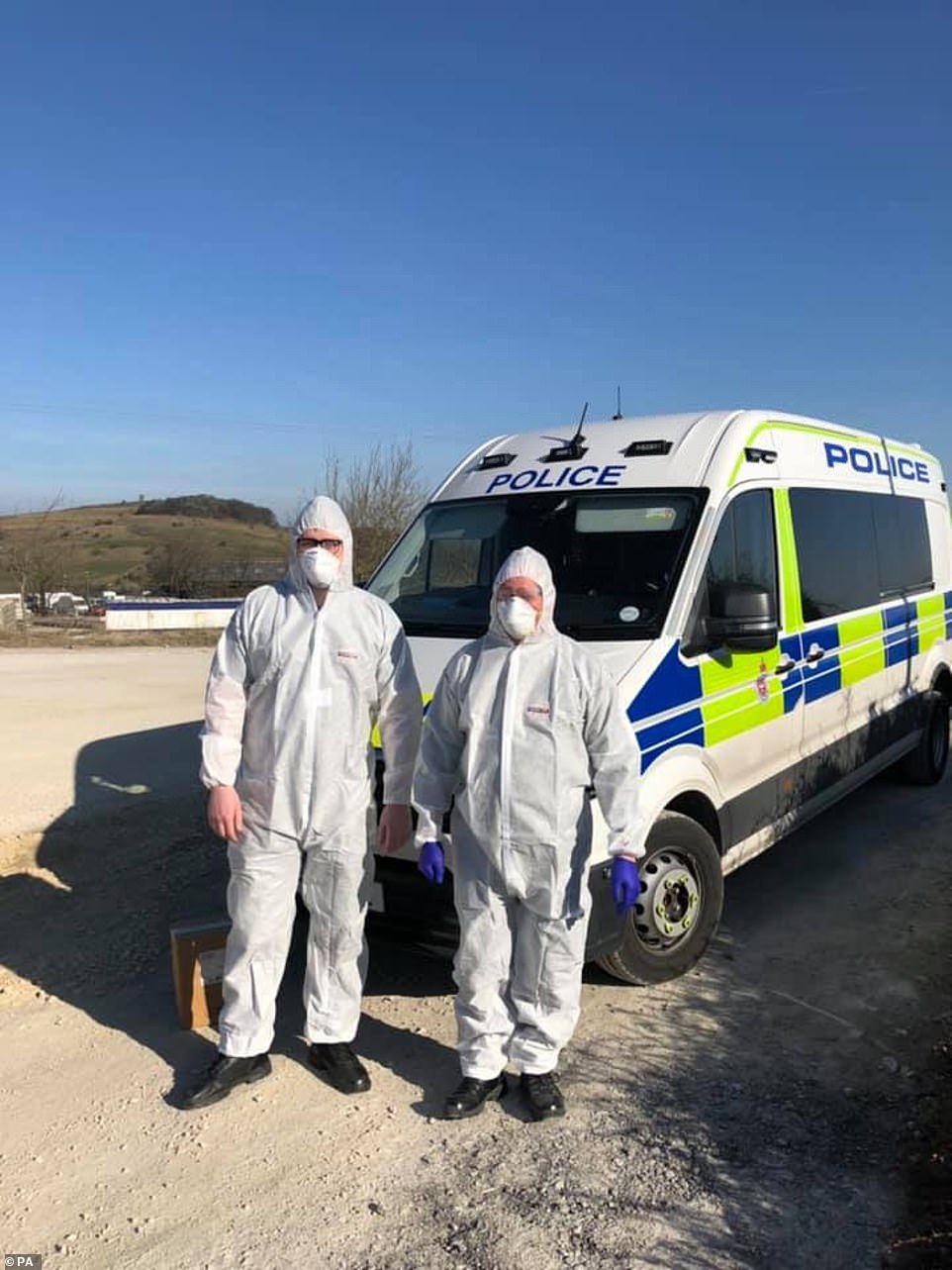 Using the unmanned aircraft they also gathered number plates from parked cars and traced their owners to their homes in Sheffield saying: ‘Walking your dog in the Peak District: Not essential.’

Who is the chief of the eager coronavirus cops? 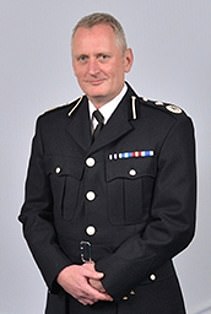 Chief Constable Peter Goodman (right), the son of a clergyman and a nurse, was appointed to lead Derbyshire Constabulary in 2017 after 29 years serving the public.

CC Goodman, 54, graduated from Leeds University with a degree in English Language and Literature and worked in insurance for a brief time before signing up to become a police officer with the Nottinghamshire Constabulary in 1988.

In the 1990s he was made a detective and leading investigations in the city of Nottingham. In those days it was ‘very tangible crime’ and he’s gather ‘physical evidence,’ he told the local paper four years ago.

But nowadays, CC Goodman said: ‘Never in the history of policing have there been so many fantastic tools to help us catch criminals and solve crimes. I believe this pace of change will continue into the future.’

In 2013, CC Goodman was awarded the Queen’s Police Medal in recognition of his service.

In his spare time, CC Goodman told the local paper he enjoys watching the BBC’s Line of Duty series.

CC Goodman is the father of three children, all of whom have now completed secondary school.

Yesterday Derbyshire Police posted a picture on their Facebook page of a notice they had slipped under a car’s window wiper, asking, ‘Why are you here today?’ Derbyshire Police argue that taking a drive to the countryside to walk the dog is not essential travel.

However, some of those commenting on the post did not agree and argued that driving to a remote location to exercise out of an urban centre could, in fact, be more conducive to public health.

Claire Whitaker wrote: ‘Why would you discourage people from driving to emptier spaces to walk – as long as they are observing distancing? That leaves local green spaces less crowded for those who can’t drive. I don’t understand this at all. I can’t see any guidance on the Govt website that says we can’t do this – in fact it just says “You can also go for a walk or exercise outdoors if you stay more than 2 metres from others” – which is often easier to do in less urban places.’

And Dave Armstrong said: ‘The Police need to get a grip and use common sense. If people are using social distance then there is no harm.

‘If you are Driving in your car (any distance) you are not coming in to contact with anyone again no harm. This is not a Police state.’

The government has said those in self-isolation are allowed to leave the house for one form of exercise a day – a walk, run or cycle alone or with other members of your household. Dog owners are allowed to walk their pets, but groups of more than two people are not allowed.

The advice has proven problematic for those in built-up areas whose only nearby green-space is a park shared by thousands of others looking to exercise at the same time.

But some believe the force is going too far. One senior Tory MP told MailOnline: ‘Probably what will happen is a quiet word from the policing minister to the Chief Constable of Derbyshire saying: ‘can you ease off here, we don’t want to give you a haranguing, but we have got enough to worry about without you telling off people who are just taking their dog for a walk.’ 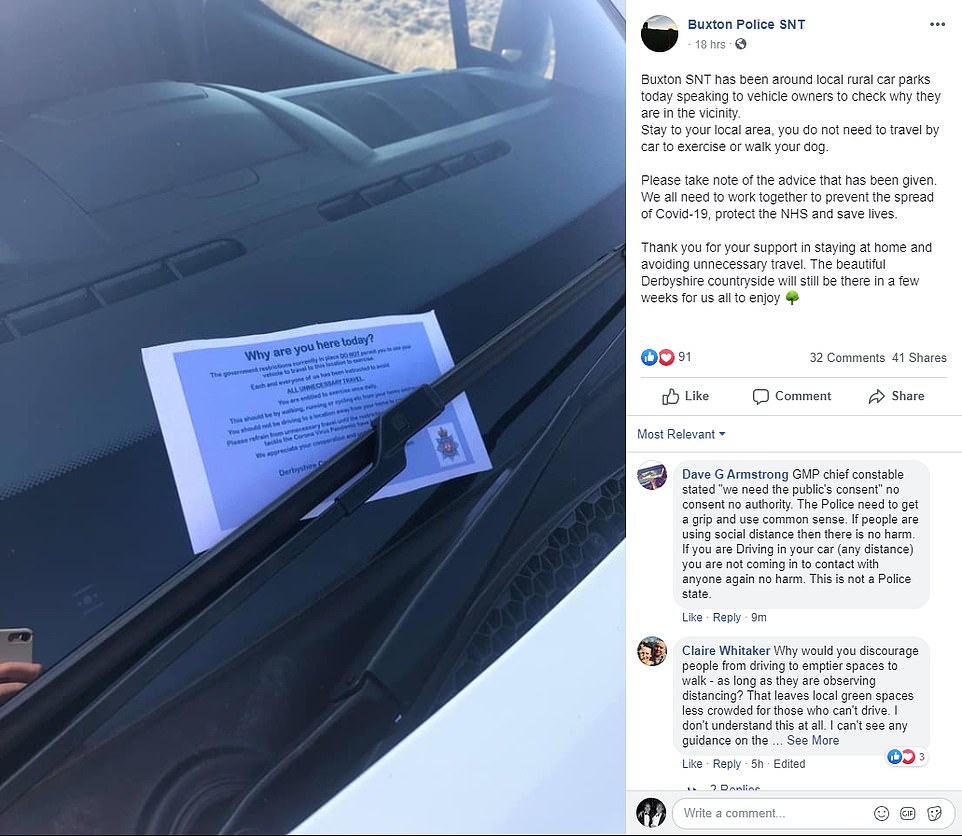 Yesterday Derbyshire Police posted a picture on their Facebook page of a notice they had slipped under a car’s window wiper, asking, ‘Why are you here today?’ Derbyshire Police argue that taking a drive to the countryside to walk the dog is not essential travel’

The MP added the government was in a difficult position where looser advice saying people could be ‘reasonable’ would risk being exploited by ‘idiots’.

A spokesman for the Big Brother Watch civil liberties group said it’s understandable why police are dispersing parties and barbecues but demanding drivers give journey details at road checkpoints is over-the-top.

This weekend, with the clocks going forward, heralding better weather and lighter nights, police around the country were keeping up the strict message that the countryside was not open to visitors. 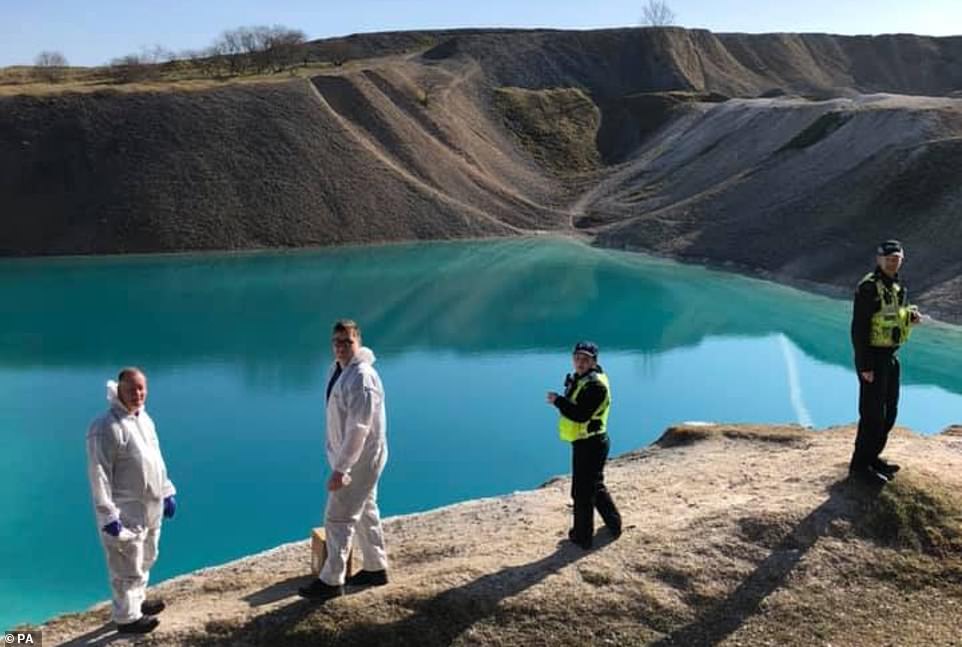 Police across Britain are enforcing the strict coronavirus lockdown as the Covid-19 death toll pushed past 1,000

Inspector Mark Gee, manning a vehicle check point in Richmondshire, North Yorkshire, said: ‘We have had motorcyclists coming into the Dales claiming they are exercising.

‘We have to remind people, exercise should be done from your home address, on foot unless you’re on a bike.

‘Every time you are on a road there’s an increased chance of a collision and if that happens, it is putting a strain on our local NHS resources which are limited in any case, even without us facing a worldwide crisis.’ 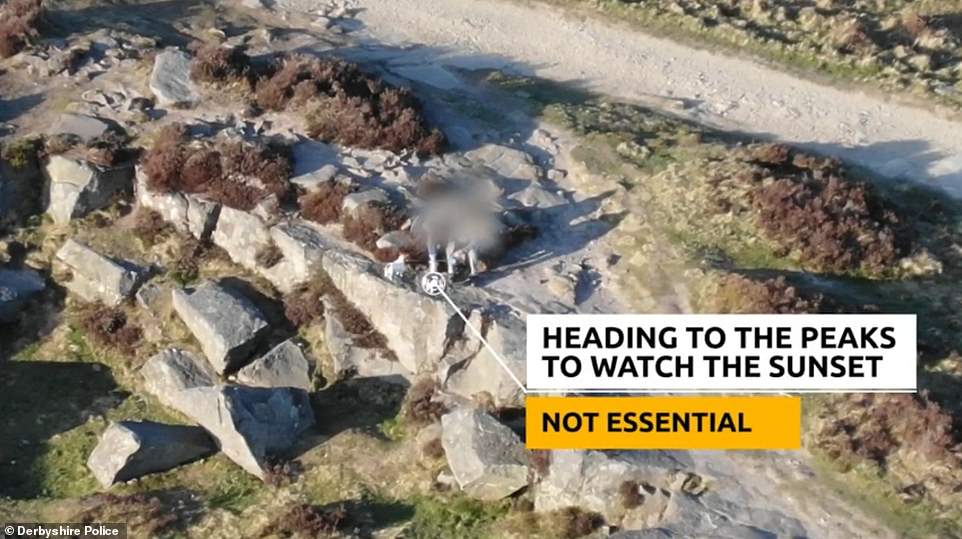 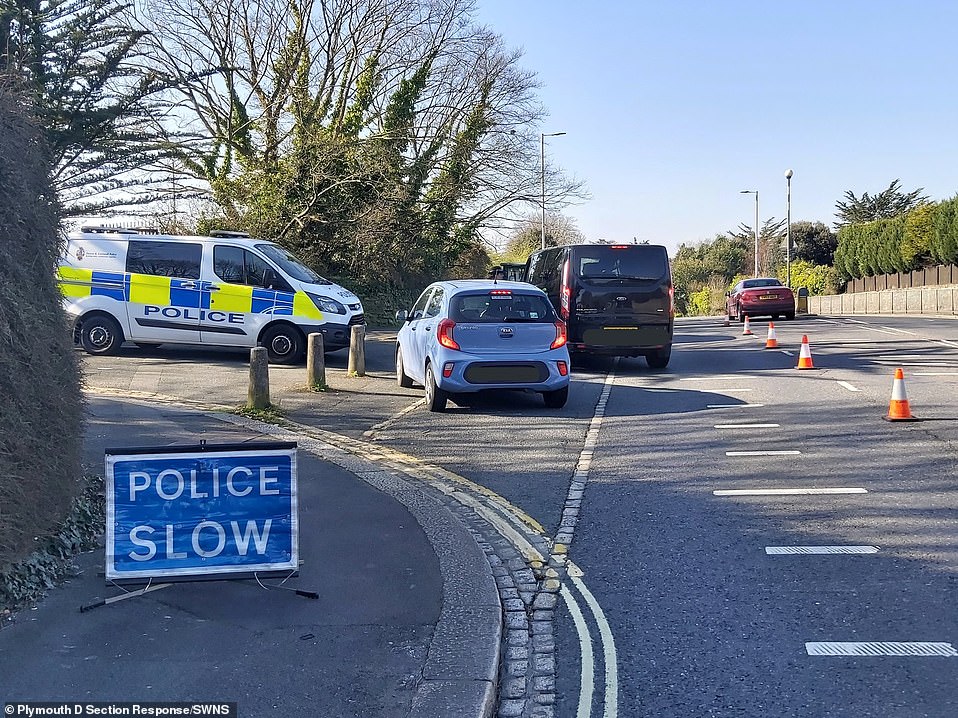 He said the quieter traffic could encourage bikers to speed up on open roads, leaving them more at risk of crashing.

Mr Gee said the checkpoint near the Catterick Garrison was being supported with officers from Royal Military Police.

He felt the message was getting through to most people that the countryside was not open, and noted roads were less busy than previous days. 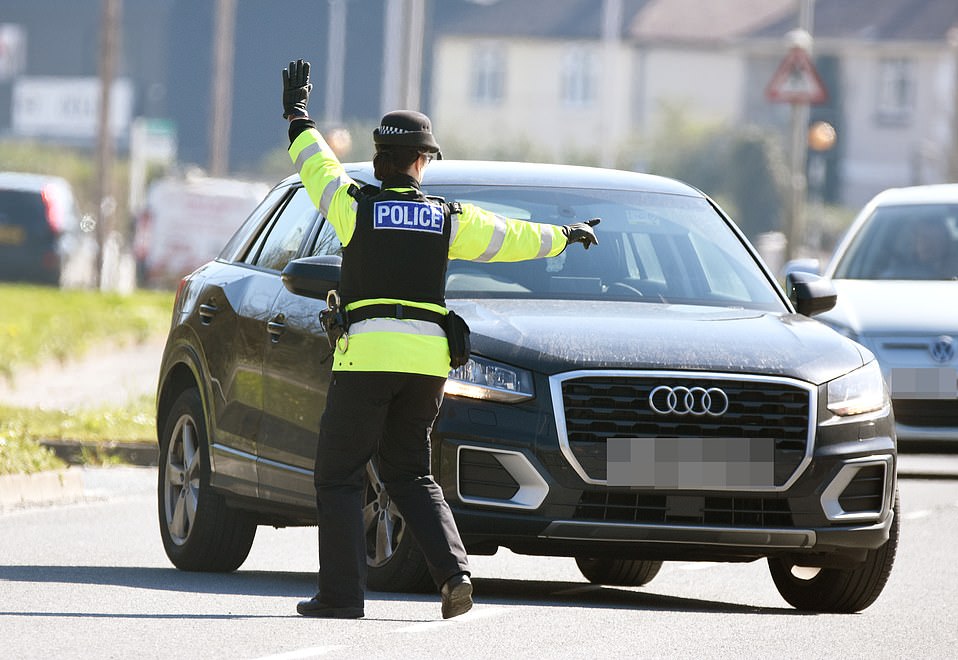 A police officer is pictured directing traffic at a checkpoint in Plymouth yesterday. All non-essential travel has been banned by the government 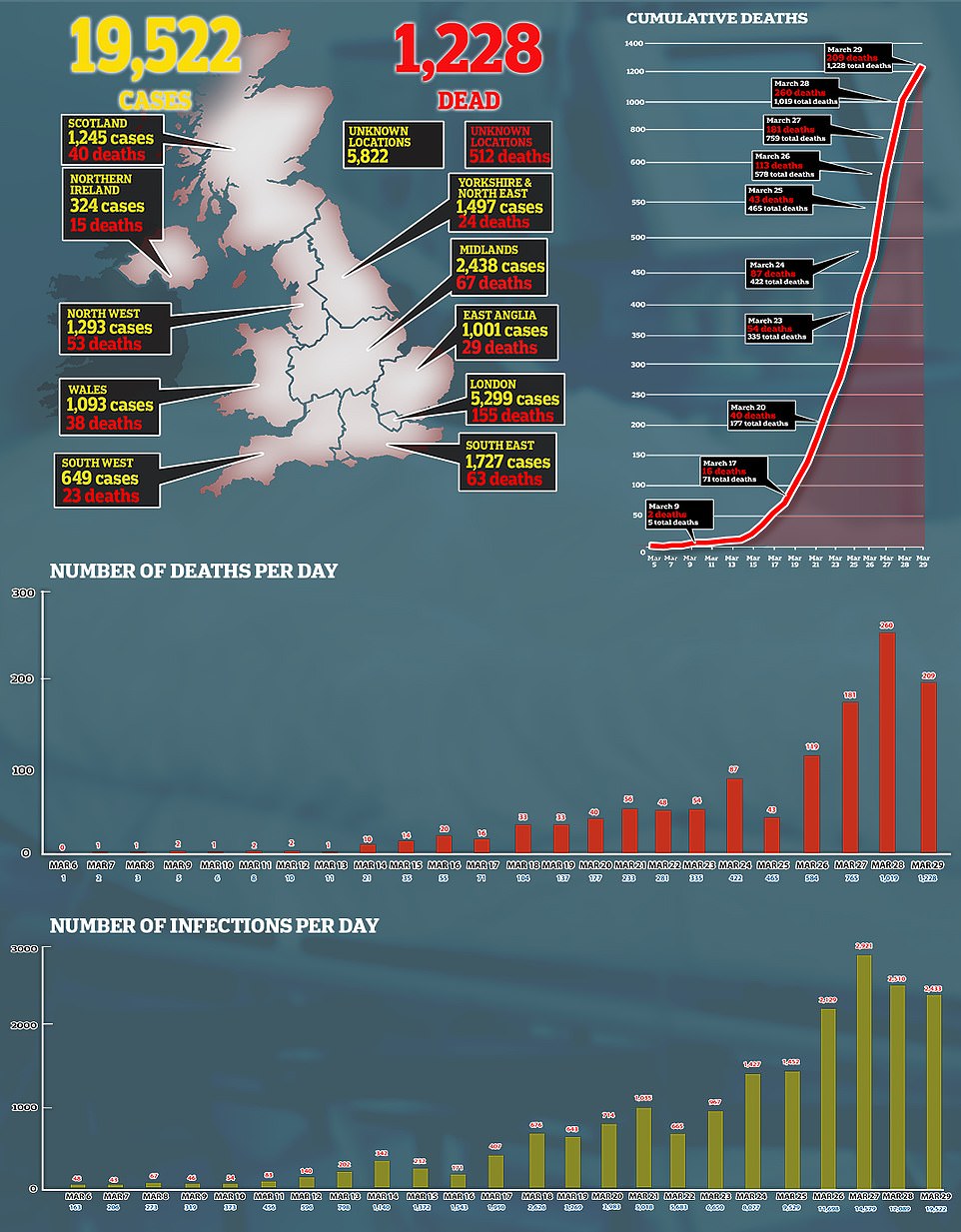 Jason Aldean Drops New Single ‘Got What I Got’
Harry Kane: End of June the limit for season – Kane
Popular News
Thousands of people to get £200 direct payment in bank account within days to help with energy bills – how to get it | The Sun
03/07/2022
Stuart Broad builds up to second Virtual Test with Sri Lanka
26/03/2020
Bindi Irwin Made Last-Minute Changes to Her Wedding Due to Coronavirus Lockdown
26/03/2020
Widow on The Repair Shop leaves viewers sobbing
26/03/2020
Coronavirus lockdown: Global quarantine reveals weird fact about humanity
26/03/2020
Recent Posts