A police officer has been forced to isolate himself from his newborn baby after a thug spat at him while he was on duty.

PC Richard Bracey has moved out of his home, away from his nine-week-old baby daughter, Isla-Rose, after he was spat at while arresting a man on suspicion of possessing an offensive weapon.

The proud father-of-four, who is based in Walsall and has worked for West Midlands Police for 11 years, had previously posted pictures of the newborn asleep in his police helmet on social media.

But the 30-year-old has now decided to move into his mother’s house, which is empty while she cares for her elderly parents, to protect his family. 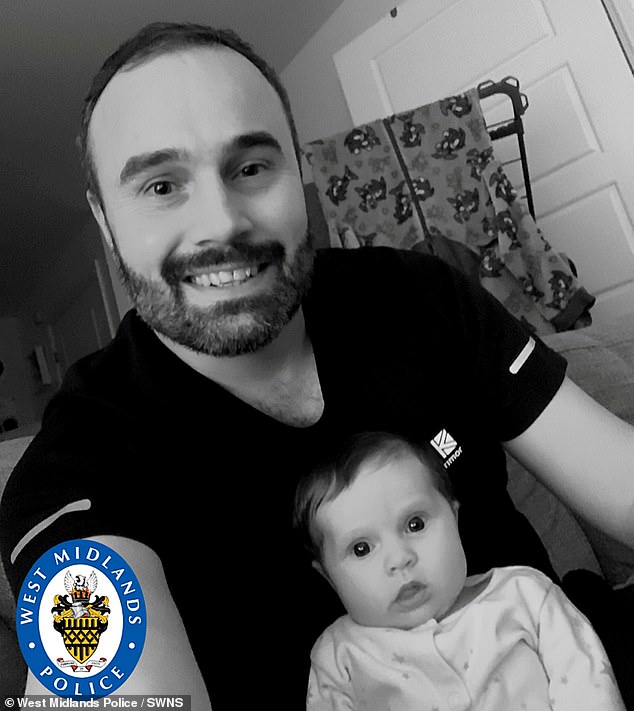 PC Richard Bracey has moved out of his home, away from his nine-week old baby daughter, Isla-Rose, after he was spat at while arresting a suspect 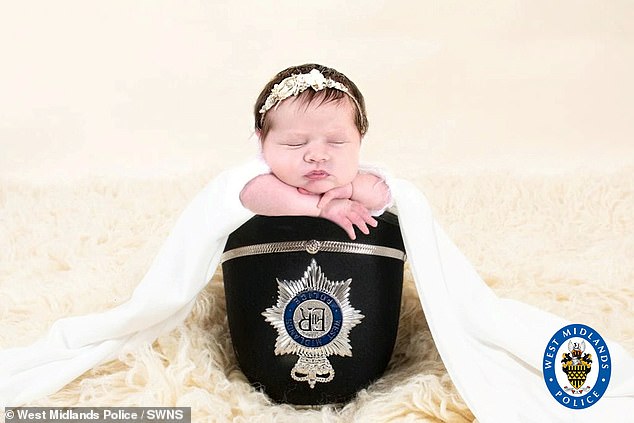 The proud father-of-four, who has worked for West Midlands Police for 11 years, had previously posted pictures of the newborn asleep in his police helmet on social media

He plans to keep in touch with partner Kelly and her son, and Isa as well as his three other children using social media and Skype.

PC Bracey, who is based in the Bloxwich area of Walsall, said: ‘It’s been a really hard decision to make, but I feel it’s the right one for my family.

‘I also have three older children who I won’t see during this time.

‘Isla’s health must come first, she’s so small and vulnerable, I wouldn’t want to put her at any further risk.

‘It worries me that I’m missing out on vital bonding with Isla, but it won’t be forever.

‘I’ve still got my job to do and I’m passionate about continuing to help and protect our communities during this pandemic.’

The spitting incident took place on the same day that PC Bracey, a response officer, returned to duty after a period into self-isolation.

After returning to the frontline on Thursday, he was called to deal with a 35-year-old man in Walsall town centre, who was arrested on suspicion of possession of an offensive weapon.

Following his arrest, the man attempted to spit at PC Bracey and also spat in the police car.

The incident comes following a spate of assaults on officers, who have been spat and coughed at by suspects in the midst of the coronavirus crisis.

As previously reported by the MailOnline, Marc Olley, 36, from Grimsby, was jailed for 20 weeks after angrily biting and spitting at two officers before saying he had coronavirus. 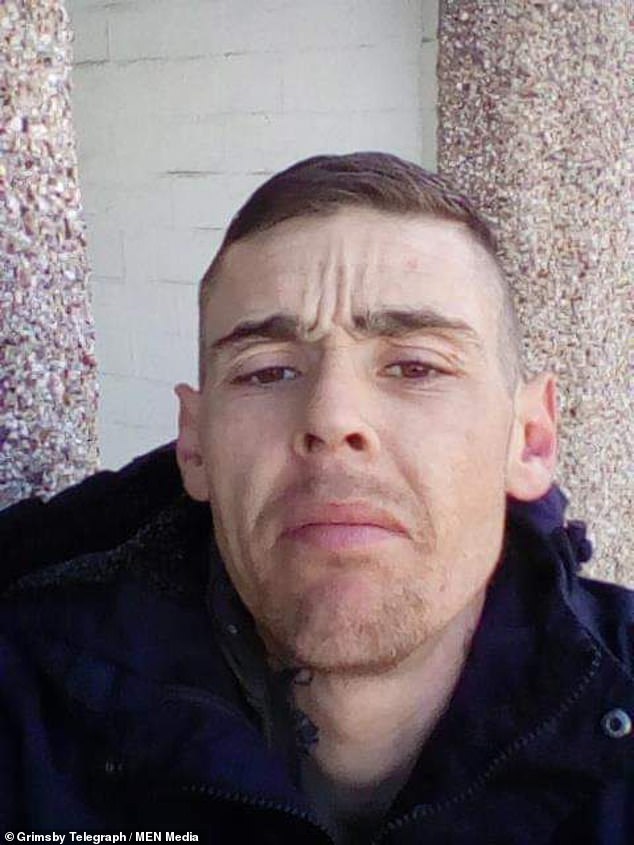 Marc Olley, 36, from Grimsby, was jailed for 20 weeks after angrily biting and spitting at two officers before saying he had coronavirus

It follows an ‘abhorrent’ man being jailed for attacking a woman with a can and coughing in a police officer’s face.

Alex Wood grabbed a woman by the chest and hit her over the head with a can with enough force to leave a lump.

Wood coughed in the face of the arresting officer who was wearing a protective face mask.

Wood was charged at Oxford Magistrates’ Court on Tuesday March 24 and convicted the next day.

A further four weeks were added for criminal damage, but to run concurrently.

Meanwhile Oliver Cook, 35, was was jailed for 120 days after admitting two counts of assaulting an emergency worker, theft and criminal damage.

Cook, of Chatham, Kent, was arrested outside a supermarket in Whitstable, also Kent, at around 6.20pm on Sunday after he was seen trying to steal meat.

As Cook was searched, he spat at a police officer and laughed as he said: “I have coronavirus.”

Britain’s frontline emergency workers have become targets for crime including assaults and muggings as the coronavirus crisis grips the nation.

Paul Leivers, 48, was jailed for a year on Saturday for spitting on police officers while claiming he had coronavirus symptoms.

It was believed to be one of the first cases since added powers were given to police last week.

Thieves have also been stealing vital equipment from ambulances, putting lives at risk during the coronavirus epidemic.

Nurses are being called ‘disease spreaders’ while being heckled and spat at, according to Royal College of Nursing director Susan Masters.

NHS nurse Sama Shari, 33, was spat on by a vile yob in Withington, south Manchester, while she walked home from a 10-hour shift.

She fears she was targeted for wearing her ID badge for The Christie Hospital.

On March 27, a Poole nursing home carer was assaulted as she walked home, with her attacker spitting in her face and telling her: ‘You have got corona’.

The carer believes she was targeted for wearing her nursing home uniform after a spate of attacks on NHS health workers. The woman was hit on the head and knocked to the ground before being kicked repeatedly and spat on.

NHS nurses have been advised not to wear their uniform outside work and hide their ID badges as people accuse them of ‘spreading coronavirus’.

Paramedics were called to the home of a sick man self-isolating in Gloucestershire on Saturday, when a 43-year-old man, who also lives in the home, deliberately spat on them. He was jailed for a year for threatening previous bodily harm by infecting with Covid-19.

Germans will be fined £440 for STANDING too close to each other
People share how self-isolation has had a positive effect on their lives
Popular News
Back pain: Does your lower back hurt? Effective treatments for a herniated disk
05/07/2022
Stuart Broad builds up to second Virtual Test with Sri Lanka
26/03/2020
Bindi Irwin Made Last-Minute Changes to Her Wedding Due to Coronavirus Lockdown
26/03/2020
Widow on The Repair Shop leaves viewers sobbing
26/03/2020
Coronavirus lockdown: Global quarantine reveals weird fact about humanity
26/03/2020
Recent Posts