NSW has reported 45,098 new cases of COVID-19 and nine deaths as new restrictions come into force for the next three weeks in an attempt to curb the virus surge.

There are 1795 coronavirus patients in hospital, a slight increase, with 145 in intensive care. 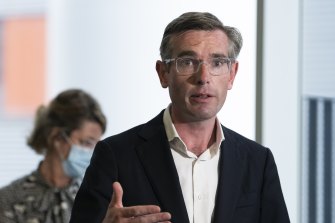 From Saturday until January 27, singing and dancing will be prohibited in hospitality venues, entertainment facilities and major recreation facilities, excluding weddings and performances. This includes pubs, clubs, nightclubs, bars and restaurants.

Upcoming major events will be risk assessed, but organisers should assume they can proceed unless contacted by NSW Health.

People have been encouraged to use “common sense” by limiting large household gatherings, as well as gathering outdoors where possible.

NSW will also update its mandatory vaccine rules, to require people who were previously required to be double-dosed – including health staff, aviation workers and teachers – to receive their booster when eligible.

It comes as modelling released by NSW Health on Friday estimated the state would reach a peak of 4700 COVID-positive hospitalisations by late January.

When 38,625 cases were recorded on Friday, NSW Chief Health Officer Dr Kerry Chant said the figure was an “underestimate” due to strains on testing. About half of all detected infections are in people aged 20 to 39, she said.

Throughout the current wave, it has been a requirement for a person to seek out a PCR test – which have had long queues and long waits for results – to be recorded in the daily case numbers.

This will change from next week, when positive rapid antigen tests will be able to be reported to health authorities through the Service NSW app. A positive rapid test result will not have to be confirmed by a PCR test, and a person with COVID can be linked to health services.

Public health orders are expected to be updated to make this report of rapid antigen test results mandatory.

Speaking on Friday, NSW Premier Dominic Perrottet said non-urgent elective surgery will also be suspended until the end of February “to alleviate pressure on the hospital system and staff”.

“These adjustments will allow us to continue to live with COVID,” he said.

Doctors have warned hospital emergency departments are approaching capacity, as they deal with the surge in COVID-positive presentations while 5200 healthcare workers are in isolation.

with Mary Ward and Lucy Carroll

Stay across the most crucial developments related to the pandemic with the Coronavirus Update. Sign up for the weekly newsletter.