Home » World News » 'No plans' to scrap Covid jab NHS mandate: No10 doubles down on move

'No plans' to scrap Covid jab NHS mandate: No10 doubles down on move

‘No plans’ to scrap Covid vaccine mandate for frontline medics in England, Downing Street says as it doubles down on plan despite warnings NHS could lose 80,000 workers overnight

There are ‘no plans’ to scrap or delay the NHS Covid vaccination mandate in England despite a huge outcry over the move, Downing Street said today.

The Government has been warned the April 1 deadline for frontline medics to get two jabs could leave 80,000 vacancies and ‘paralyse’ the health service.

But the Prime Minister’s official spokesman doubled down on the move today, claiming that it was still ‘the right approach’.

They said it was medics’ duty to be vaccinated because they ‘look after the most vulnerable in society who face serious health consequences if exposed’ to Covid.

Thousands marched through central London on Sunday against the move and so-called ‘freedom rallies’ have also been held in Glasgow, Manchester, Birmingham and Leeds.

The Royal College of GPs has warned that a sudden exodus of unvaccinated staff could have ‘massive consequences’ on the NHS, and it has called for a delay to the deadline.

But the PM’s spokesman said: ‘There are no plans to change the implementation date for this policy.

‘Health and social care workers look after the most vulnerable people in society who face serious health consequences if exposed to the virus. 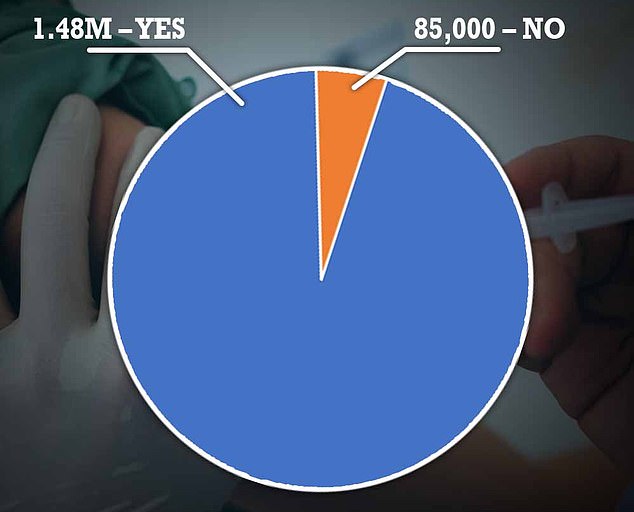 The Government has been warned the April 1 deadline for frontline medics to get two jabs could leave 85,000 vacancies and ‘paralyse’ the health service 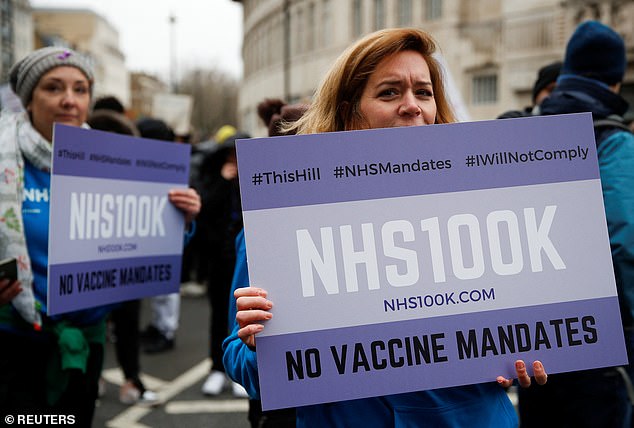 A woman holds a placard promoting NHS 100k, a group of anti-vaxx ambulance workers who ‘stand united in favour of freedom of choice, bodily autonomy and informed consent’

There are concerns that un-jabbed NHS workers will simply be recruited by health services in other parts of the UK, where there are no plans for the mandates.

Wales’ First Minister Mark Drakeford has already said he would ‘not rule out’ hiring unvaccinated workers from across the border.

The BBC has been blasted for planning to air ‘dangerous nonsense’ after calling for anti-vaxxers to appear on Question Time.

The Corporation was slammed for asking people who have not been jabbed to sit in the audience when the show visits London.

Presenter Fiona Bruce appealed for them to get in touch during the show from St Andrews last week.

She said a ‘relatively high proportion’ of Londoners were not vaccinated and ‘we want to explore’ some of the reasons why.

But social media users quickly condemned her and the BBC for planning to air ‘irresponsible’ views.

One user wrote: ‘This is dangerous nonsense. I can remember when the BBC would not have been so irresponsible, so populist or so overtly political.

‘I knew two people who died from Covid and 10 others who have had it. Two of them had it twice.’

Another tweeted: ‘Putting anti-vaxxers on a ‘debate’ programme implicitly suggests they have a legitimate point of view – even if everyone else disagrees with them.

‘You have a massive duty to properly frame the boundaries of acceptable public debate and you’re still massively failing.’

One man posted: ‘This makes little sense. Unless you are going to correct any anti vaccine comments with the facts and include a proportionate number of the vaccinated in the audience then this stunt should be reconsidered @BBCPolitics you are sinking lower and lower.’

And another added on his Twitter page: ‘This is why Question Time is past its sell by date.

All front-line NHS workers in England are required to have had one jab by February 3, in order to get two vaccines by April 1.

Asked if the PM was concerned at estimated number of layoffs, the spokesman added: ‘We don’t want to see a single member of NHS staff lost because they weren’t willing to get the vaccination that has proven to be safe around the world.

‘We know that nine in 10 NHS staff have already been vaccinated, we know that since this policy was announced tens of thousands more NHS staff have come forward and we are confident more will continue to do so.

‘It’s NHS staff working in ICUs that are seeing how those most in need of treatment are predominantly the unvaccinated. It’s them that are having to deal with the consequences of people choosing not to get vaccinations and it is those working in the NHS who are caring for our most vulnerable and it is only right that we put this requirement on them.’

Despite taking a broadly tougher stance on Covid restrictions during the pandemic, Scotland and Wales have no plans to introduce vaccine mandates in the NHS. A consultation is being launched in Northern Ireland.

Mr Drakeford told the BBC that Wales is not looking at compulsory jabs because the ‘vast majority’ of staff are already vaccinated.

When asked if he would take on NHS staff from England, Mr Drakeford added: ‘I don’t expect us to go looking for people who have not been vaccinated but, if people apply, then they would be interviewed the normal way.

‘We’d look to see what lay behind their decision. We wouldn’t rule them out but we certainly wouldn’t go out there looking for them.’

NHS England managers have been advised they can move unvaccinated medics from the frontline into roles which do not involve direct patient contact.

Bosses won’t have to help staff find ‘suitable alternative employment’ and redundancy payments will not be made to those who are dismissed.

The move will also affect live-in NHS carers who look after disabled or elderly patients in their homes.

Between 15 and 20 per cent of domiciliary staff are thought to be unvaccinated.

The Homecare Association said the mandate will cause ‘further serious harm’ to the already facing ‘paralysing’ demand.

It said the Government has ‘seriously misjudged’ the balance between the mitigated risk of infection and the risk of people going without vital care.

And it is concerned that the safety and wellbeing of older and disabled people will be ‘dangerously compromised’.

The membership body is calling for the Government to withdraw the regulations now – before employers start serving notice on unvaccinated employees.

Chief executive Dr Jane Townson said: ‘All along, we have strongly supported vaccination against Covid-19, as there is clear evidence it helps to save lives.

‘At the same time, we have consistently argued that persuasion would likely be more successful than compulsion in achieving high vaccine uptake, especially among those with genuine fears.

‘And we have repeatedly stressed the need to balance the mitigated risk of infection with the risk of older and disabled people going without vital care at home.

‘In pressing ahead with regulations requiring vaccination as a condition of deployment in CQC-regulated wider care settings, including homecare, we believe the Government has seriously misjudged this balance of risk.’

Two vaccine doses for care home staff in England have been mandatory as a condition of deployment since November.