Holtville: Thirteen people were killed on Tuesday when an SUV carrying 25 people and a semi-trailer collided on a Southern California highway near the US-Mexico border, authorities said.

Twelve people were found dead when first responders reached the highway, which winds through fields in the agricultural southeastern corner of California. Another person died at a hospital, California Highway Patrol Chief Omar Watson said.

Authorities do not yet know if the driver of the 1997 Ford Expedition, who died in the crash, had stopped at a stop sign before crossing into the path of the big rig around 6.15am, Watson said. The gravel-hauling semi-trailer hit the left side of the SUV, which appeared to have been pushed off the road that’s about 160 kilometres east of San Diego. 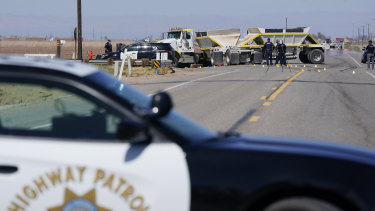 Law enforcement officers work at the scene of a deadly crash in California.Credit:AP

Watson described a grisly scene outside Holtville, a rural town about 18 kilometres north of the border with farms that grow vegetables and alfalfa for cattle feed. Officers arrived to find that some people had been ejected from the SUV onto the ground. Some of the passengers had pulled themselves from the wreckage, and others who were injured were wandering around.

A Ford Expedition typically seats eight people legally. The CHP did not immediately know why so many occupants had been crammed into the SUV. 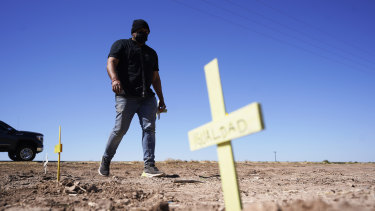 Hugo Castro leaves crosses at the scene of a deadly crash in Holtville, California. Credit:AP

The driver of the big rig, which was hauling two trailers of gravel, was hospitalised with moderate injuries.

El Centro Regional Medical Centre officials earlier reported there were 15 killed and more people in the SUV. Seven people were taken to that hospital, including one person who later died.

Others from the SUV were flown or sent to other hospitals for injuries that included fractures and head trauma. Four were flown to Desert Regional Medical Centre in Palm Springs, where one person is in critical condition and the others are stable, spokesman Todd Burke said.

The truck was travelling north on a two-lane highway, and the SUV was going west along a road where there’s a stop sign before it intersects with the highway, CHP Officer Arturo Platero said. 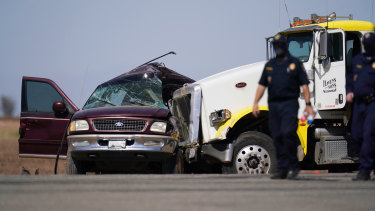 Where the semi-trailer met the passenger vehicle. Credit:AP

Authorities don’t know how fast either vehicle was going. The speed limit for tractor-trailers on the highway is 55 mph (88.5 kph), according to CHP Officer Jake Sanchez. The other road is also 55 mph for vehicles.

Macario Mora, a spokesman for Customs and Border Protection in Yuma and El Centro, said the Border Patrol was helping other law enforcement with the crash. He said the immigration status of those in the SUV was unknown and being investigated.

Authorities are working with the Mexican consulate to identify the victims, who range in age from 20 to 55. Among the injured, the youngest is 16.

“It was an unusual number of people in an SUV, but we don’t know who they were,” Mora said, adding that they could have been farmworkers.

A harvest is underway in the region, where farmworkers will collect most of the winter lettuce and other leafy greens eaten in the United States.