Labour was accused of employing ‘dog-whistle racism’ by one of its own MPs last night as the by-election campaign in Batley & Spen plumbed new depths.

The campaign material criticising the PM for meeting the Hindu nationalist leader in an area of West Yorkshire with a sizable Pakistani Muslim population was also attacked by Tory MPs.

Mr Mishra, a Hindu whose parents were born in India, told the Guardian: ‘We beat our opponents based on policies, not by dog-whistle racism.’

The campaign to replace Tracy Brabin as the areas MP has become dogged by accusations of racism, anti-Semitism and homophobia.

The leaflet said it was from the TUC, but the union said it was part of a ‘dirty tricks campaign’ and that those responsible ‘should be ashamed of themselves’.

Councillor Gwen Lowe and husband Ken were confronted on camera by an unnamed activist in Batley yesterday ahead of this week’s bitterly-fought parliamentary by-election.

An irate Mr Lowe responded by accusing members of the Galloway campaign of removing placards promoting Labour candidate Kim Leadbeater and replacing them with their own. 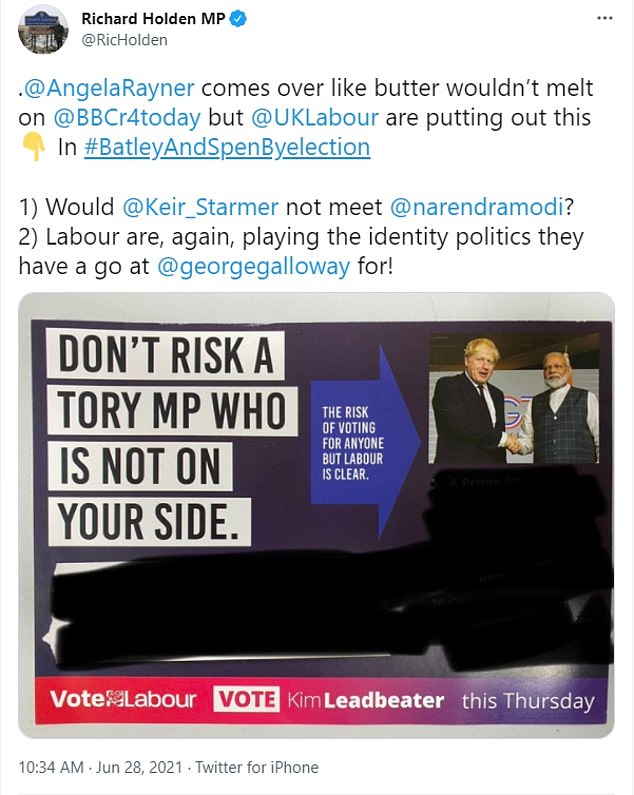 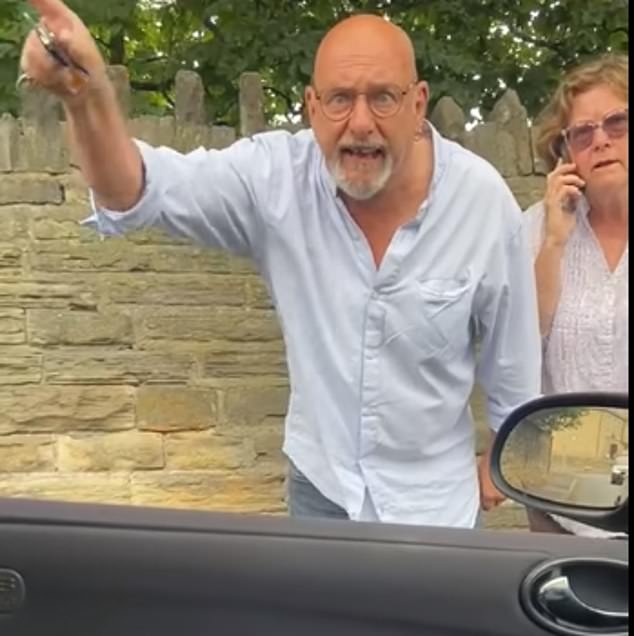 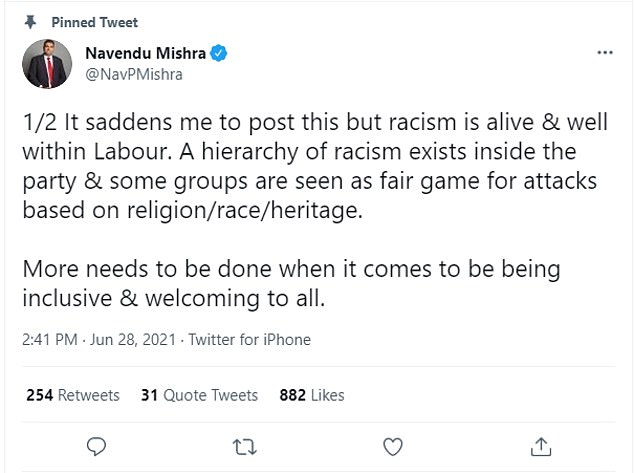 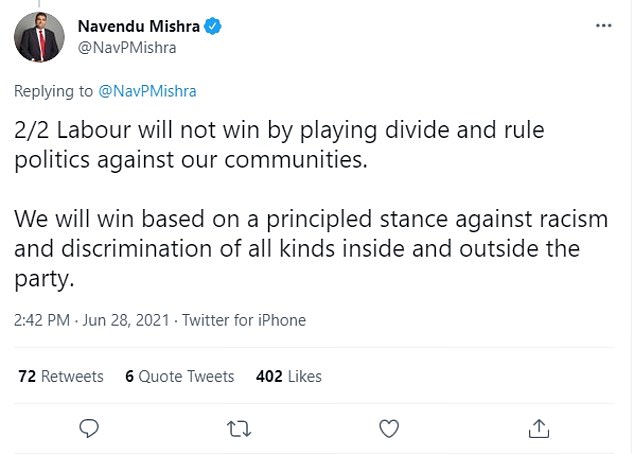 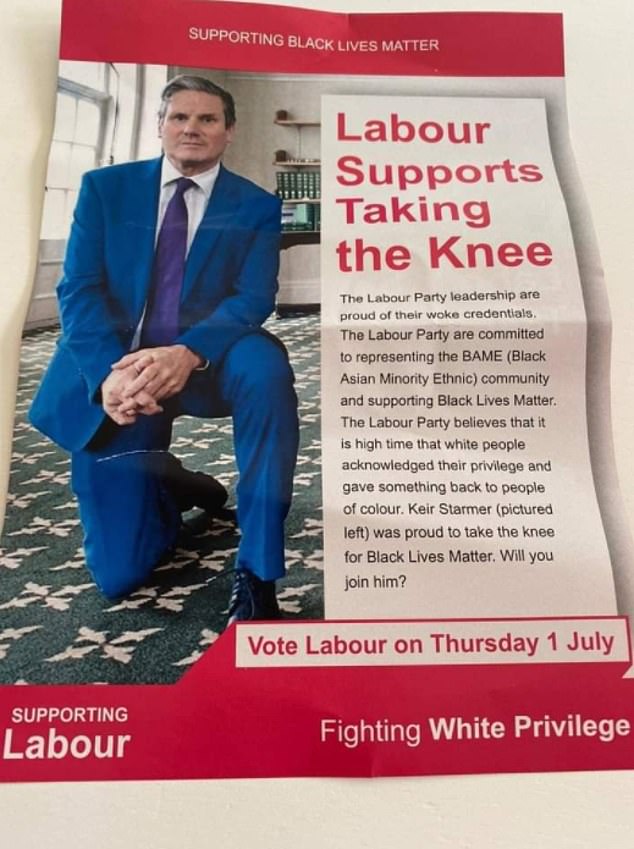 Labour lashed out today over a fake leaflet proporting to have been released by the TUC highlighting party leader Keir Starmer’s support for Black Lives Matter in a bid to hit his popularity among working class white voters.

Galloway and Labour supporters in Batley street row over posters

A public shouting match erupted after a George Galloway supporter accused a Labour councillor and her husband of tearing down election posters.

Councillor Gwen Lowe and husband Ken were confronted on camera by an unnamed activist in Batley, West Yorks., yesterday ahead of this week’s bitterly-fought parliamentary byelection.

An irate Mr Lowe responded by accusing members of the Galloway campaign of removing placards promoting Labour candidate Kim Leadbeater and replacing them with their own.

He admitted removing Galloway’s flyers from private property but claimed he did so at the owner’s request, before being pulled away from the heated row by his wife as she appeared to call the police.

The Galloway campaign denied any of its members had taken down rivals’ posters and called Mr Lowe’s actions ‘abusive’.

A Labour campaign source said Galloway supporters were ‘out of control’ and compared the situation on the ground in Batley to ‘the wild west’.

The video shows the activist pulling up alongside the couple in a car as they walk along the footpath.

He points and says: ‘You’ve just took them George Galloway…’

Before he can finish, Mr Lowe turns and snaps back: ‘They took down the Kim (Leadbeater) ones.’

The Galloway supporter asks: ‘Who did?’ To which Mr Lowe shrugs and says: ‘Whoever put the George Galloway ones up.’

When asked why he left the Labour signs up, Mr Lowe blasts: ‘That’s private property and he (the owner) doesn’t want them (the Galloway posters).’

The Galloway activist continues to harangue him, at which point Councillor Lowe takes her husband by the arm and pulls him away.

She then appears to tell a police operator over the phone: ‘I’m being harassed.’

Mr Mishra later took to Twitter to add: ‘It saddens me to post this but racism is alive and well within Labour.

‘A hierarchy of racism exists inside the party and some groups are seen as fair game for attacks based on religion/race/heritage. More needs to be done when it comes to be being inclusive & welcoming to all.

‘Labour will not win by playing divide and rule politics against our communities. We will win based on a principled stance against racism and discrimination of all kinds inside and outside the party.’

However the Leadbeater campaign defended the Modi material, with a spokesman saying: ‘This leaflet makes it clear that a vote for anybody other than Kim would lead to a Tory MP who would support a Prime Minister who insults Muslim women and calls it a joke, refuses to deal with Islamophobia in his party, and fails to speak out on human rights abuses in Kashmir.

‘Unlike the Tories, Labour’s approach to these issues will be to always bring communities together, promote peace and put human rights first.’

But Tory MP Richard Holden said: ‘Would Keir Starmer not meet Narendra Modi? Labour are playing the identity politics they have a go at George Galloway for.’

The former Labour MP who held the seat, Tracy Brabin, who quit after being elected mayor of West Yorkshire, also claimed that activists had been pelted with eggs and kicked in the head.

Supporters of hard Left former MP George Galloway, who is standing in the election, were accused last week of using the recent fighting between Israel and Hamas in Palestine, along with the Jewish heritage of Sir Keir’s wife, to stir up anger.

Miss Leadbeater, the sister of former MP Jo Cox who was murdered in the constituency in 2016, was confronted by a man who challenged her over the situation in Kashmir and her stance on LGBT+ education.

Miss Brabin said she was leafleting with ‘colleagues, volunteers, campaigners’ in Batley on Sunday when they ‘were followed, verbally abused and physically assaulted by a group of young men’.

West Yorkshire Police confirmed that they were investigating, and Ms Brabin – who also holds the police and crime commissioner responsibility for the region – praised officers for their swift response.

But she added: ‘We know why tensions are rising in our streets. The actions of these people do not represent the Batley and Spen I know. We are kinder than this.’

Labour MP for Halifax Holly Lynch added: ‘There has been a series of increasingly serious and violent attacks in recent days and this is absolutely unacceptable.’

In a video that circulated online on Friday, Ms Leadbeater was seen to ask the man not to shout at her, before turning away and being pursued and heckled by a group.

In the video, he raises his voice at Ms Leadbeater, who responds by repeatedly asking why he would shout at her in the street.

Ms Leadbeater then leaves and is pursued by a group to a car.

She later alleged that opponent and former MP George Galloway, who is standing for his Workers Party, had been ‘laughing’ nearby.

Mr Galloway said it was a ‘false statement’ and, asked whether he would condemn the behaviour, he replied: ‘Absolutely.’

The Batley & Spen by-election will be contested by 16 people from the hard left to far right of politics.

Kim Leadbeater, the sister of the areas’s murdered former MP Jo Cox is running for Labour. But she is up against former Labour MP George Galloway who is running for the Workers Party.

This could play into the hands of Tory Ryan Stephenson, who is the favourite to take the seat.

On the far right, Jayda Fransen, the former Britain First leader, is standing as an independent, And former UKIP leadership candidate Anne Marie Waters is standing for her For Britain Movement.