Italy sees number of deaths rise by its lowest in almost a week – 727 – but number of new infections sees sharp spike with 4,782 new cases

The percentage rise in daily deaths in Italy – 5.8 per cent – is also the lowest since the crisis began in the country.

However, the number of new cases rose more sharply than a day earlier, growing by 4,782 against a previous 4,053, bringing total infections since the outbreak began to 110,574.

In Lombardy, the epicentre of the outbreak, the daily tallies of deaths and cases were both up compared with those the day before, reversing the recent trend.

Italy has registered more deaths than anywhere else in the world and accounts for around 30 per cent of all global fatalities from the virus. 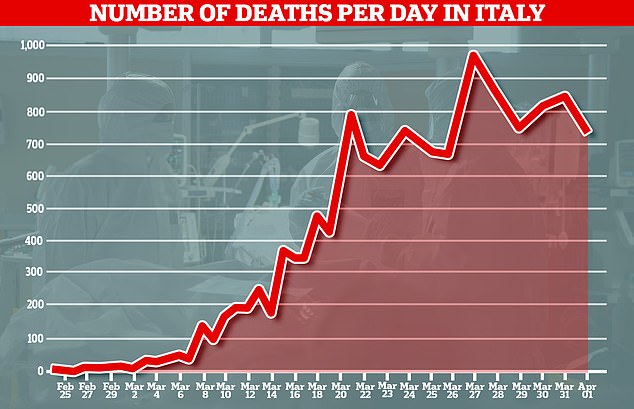 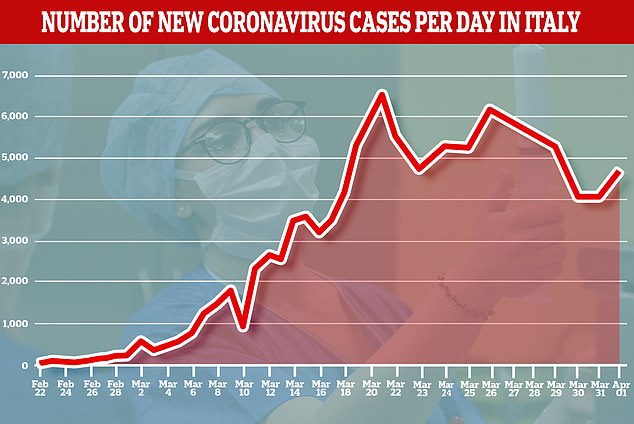 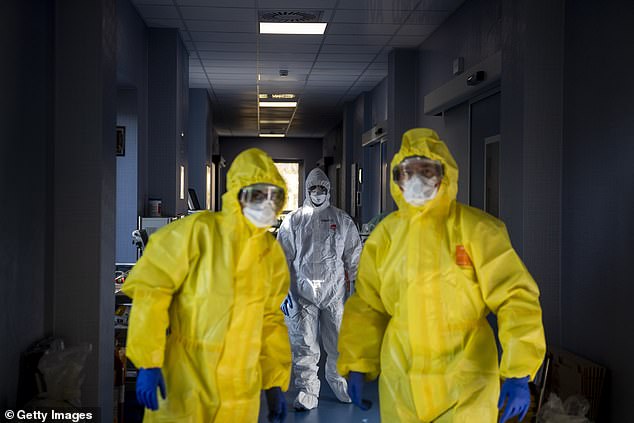 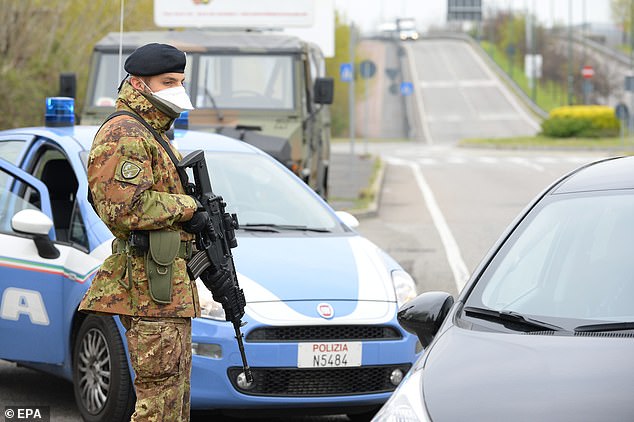 Italian soldiers and law enforcement officers carry out controls during the country’s lockdown near Milan, in the hardest-hit north 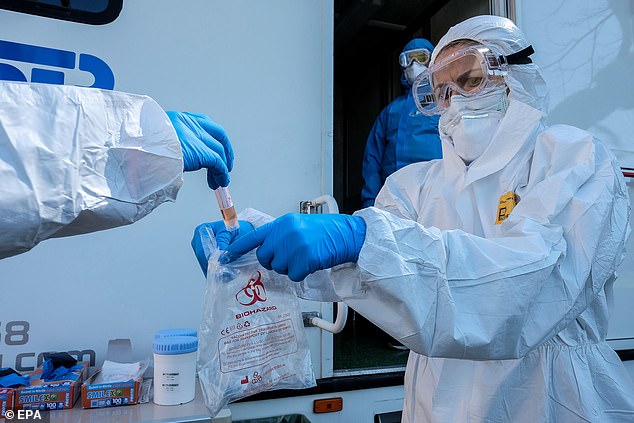 Of those originally infected nationwide, 16,847 had fully recovered on Wednesday, compared to 15,729 the day before. There were 4,035 people in intensive care, up from a previous 4,023.

The torrent of Italian death data reveals that the region around Milan with a population of 10 million reported almost as many coronavirus fatalities in March as it would normally have done from all other causes.

The Mediterranean country of 60 million people is living through its worst disaster since World War II.

It registered 12,399 COVID-19 related deaths last month – thousands more than officially reported by any other country.

But the tolls being read out daily by health officials in Rome can often seem hard to quantify.

That sounds like a lot – but how does that compare to the number of people who usually die in Italy in a day? 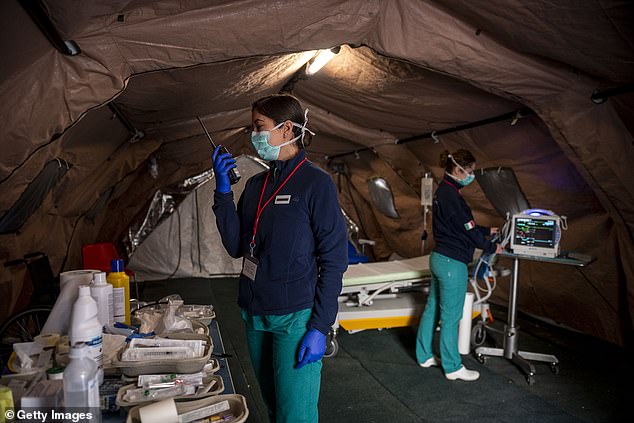 AFP tried to figure this out by comparing 2018 data from Italy’s official statistic agency ISTAT – the last available for all regions – and the coronavirus deaths reported by the civil protection service in March.

Italian officials acknowledge that their coronavirus data are incomplete with deaths from COVID-19 related causes outside hospitals often not counted.

The number of people who died after catching the virus without ever being tested is unknown.

So is the number of people who died of other causes because they could not get treatment from hospitals dealing with a ceaseless flow of COVID-19 patients.

Some newspapers are asking why jumps in March deaths reported individually by some cities do not appear to be reflected in the national tally.

‘The death count does not add up,’ the Il Fatto Quotidiano said Wednesday.

Here is what the official figures do show.

The northern Lombardy region that includes the financial capital Milan turned into the global epicentre of the pandemic when Italy overtook China’s official death toll on March 19. 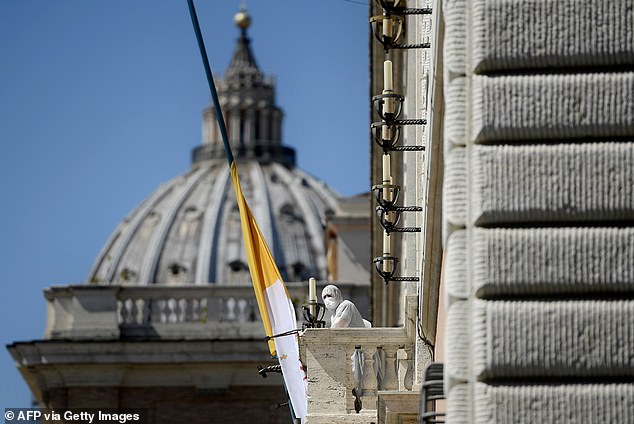 A person in protective gear stands at the balcony of a Vatican’s building on Via della Conciliazione in Rome, with St. Peter’s basilica in background

Lombardy is Italy’s industrial heartland and includes heavily-affected cities such as Bergamo and Brescia to Milan’s east.

It reported 7,176 coronavirus deaths in March.

All countries’ monthly deaths vary depending on the season.

United Nations data show Italy recording the highest number of deaths in January and the lowest in June.

March turns out to be a statistically average month.

This suggests that Lombardy’s official toll from COVID-19 last month – 7,176 – was just under 15 percent shy of the number of people who would have statistically been expected to die in March without the epidemic.

Bergamo Mayor Giorgio Gori said Wednesday he does not trust the official figures and thinks the real toll may be twice as high.

The mayor tweeted a newspaper analysis suggesting that the COVID-19 toll in the Bergamo province was ‘between 4,500 and 5,000, and not the 2,060’ officially reported.

‘How many are infected then?’ the Bergamo mayor asked. 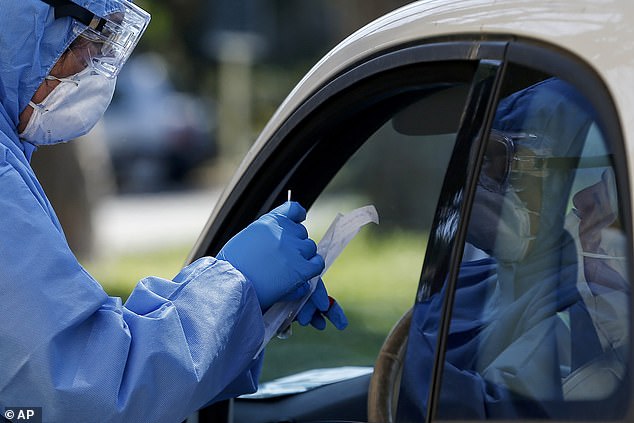 ‘I fear that the figure is higher,’ the mayor tweeted.

Lombardy was reporting about two-thirds of Italy’s virus deaths when the rate of officially registered infections was still soaring daily in the early part of March.

Neighbouring regions with high death tolls have been reporting lower infection rates throughout the crisis.

AFP’s comparison of the data reflects that.

That corresponds to around 40 percent of its estimated monthly deaths average of 4,150 for 2018.

The Piedmont region around the industrial city of Turin reported 854 COVID-19 related deaths.

AFP estimates that it would have otherwise witnessed around 4,486 deaths.

A report authored by an Italian expert at European Society of Anaesthesiology also looked at the data and found that Italy’s death toll will keep rapidly climbing for some time.

‘The data suggest that the increase in numbers of patients in intensive care in both the Lombardy region and Italy as a whole are likely to have peaked,’ the report said.

But ‘the numbers of deaths in hospital will continue to increase at the maximum rate for several days to come’.

Jen Garner does NOT want ex Ben Affleck to introduce kids to much-younger new love Ana de Armas – The Sun
April is going to be the cruellest month in the coronavirus crisis – we need mass testing now before it’s too late – The Sun
Popular News
Bigfoot killed in car crash is being covered up by police, claims conspiracy
27/11/2022
Stuart Broad builds up to second Virtual Test with Sri Lanka
26/03/2020
Bindi Irwin Made Last-Minute Changes to Her Wedding Due to Coronavirus Lockdown
26/03/2020
Widow on The Repair Shop leaves viewers sobbing
26/03/2020
Coronavirus lockdown: Global quarantine reveals weird fact about humanity
26/03/2020
Recent Posts