Have these little miracles found the swift way to happiness? In words so lyrical they’ll make your heart soar, bestselling author HELEN MacDONALD shares the secret wonders of a very special garden visitor

To me, swifts are magical in the manner of all things that exist just a little beyond understanding. Once they were called the ‘Devil’s bird,’ perhaps because those black crosses screaming around churches seemed pulled from darkness, not light.

But to me, they are creatures of the upper air, and of their nature unintelligible, which makes them more akin to angels. Unlike all other birds I knew as a child, they never descended to the ground.

Back then I was frustrated that there was no way for me to know them better. They were so fast it was impossible to see them clearly through binoculars. They were only ever flickering silhouettes at 30, 40, 50 miles an hour, a pouring sheaf of identical black grains against bright clouds. 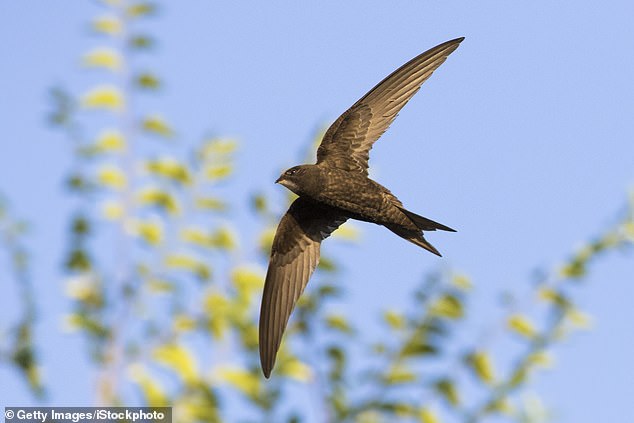 To me, swifts are magical in the manner of all things that exist just a little beyond understanding

There was no way to tell one bird from another, nor to watch them do anything other than move from place to place. Although sometimes, if the swifts were flying low, I’d see one open its mouth, and that was uncanny, because the gape was huge, turning the bird into something like a miniature basking shark.

Even so, watching them with the naked eye was rewarding because it revealed the dynamism of what before was merely blankness. Swifts weigh about 1½ oz, and their surfing and tacking against the pressures of oncoming air make visible the movings of the atmosphere.

They still seem to me the closest things to aliens on Earth. I’ve seen them up close now, held a live grounded adult in my hands before letting it fall back into the sky. You know those deep-sea fish dragged by nets from fathoms of blackness, how obvious it is they aren’t supposed to exist where we are.

The adult swift was like that in reverse. Its frame was tough and spare, and its feathers were bleached by the sun. Its eyes seemed unable to focus on me, as if it were an entity from an alternate universe whose senses couldn’t quite map on to our world. Time ran differently for this creature.

If you record swifts’ high-pitched, insistent screaming and slow it down to human speed, you can hear what their voices sound like as they speak to one another: a wild, bubbling, rising and falling call, something like the song of common loons.

Swifts live on average for just over five years, and they nest in obscure, dark and cramped spaces: hollows beneath roof tiles, behind the intakes for ventilation shafts, in the towers of churches. Their nests are made of things snatched from the air: strands of dried grass pulled aloft by thermals; molted pigeon-breast feathers; flower petals, leaves, scraps of paper, even butterflies. 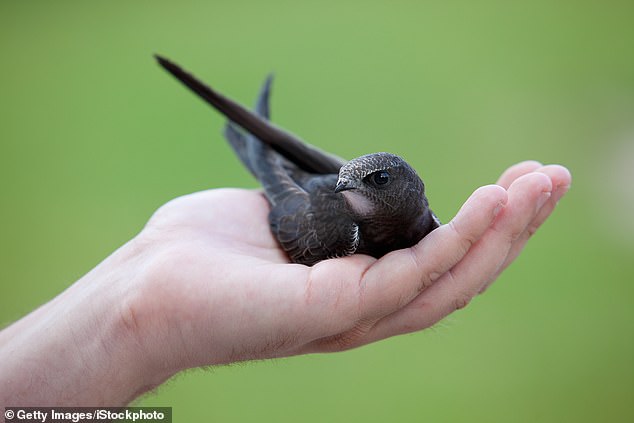 They still seem to me the closest things to aliens on Earth. I’ve seen them up close now, held a live grounded adult in my hands before letting it fall back into the sky

They’re so aerial they mate on the wing, and once young swifts leave their nests, they fly continually, likely not landing at all for two or three years, bathing in rain, winnowing fast and low to scoop mouthfuls of water from lakes and rivers.

These birds spend only a few months here. They winter over the forests and fields of sub-Saharan Africa, and the rest of the time they’re moving, making a mockery of borders.

To avoid heavy rain, which makes it impossible for them to feed, the 59,000 or so pairs of swifts that nest in the UK will fly clockwise around low-pressure systems, travelling across Europe and back again.

They arrive here in May, and leave only three months later. By the second week of August, the skies around my home are empty, after which I’ll see the occasional straggler and think, sadly: ‘That’s the last one.’

On warm summer evenings, swifts that aren’t tending their eggs or chicks scream in low, speeding packs around rooftops. Later they gather higher in the sky. And then, as if summoned by a bell, they all fall silent and rise higher and higher until they disappear from view.

These ascents are called vesper flights, from the Latin vesper for evening. Vespers are evening devotional prayers, and I have always thought ‘vesper flights’ the most beautiful phrase.

Many times I’ve tried to see them do it. But always the dark got too deep, or the birds skated too wide and far across the sky for me to follow.

For years we thought vesper flights were simply swifts flying up to sleep on the wind. Like other birds, they can put half of their brain to sleep at a time. But it’s possible that swifts properly sleep up there too for short periods, flying on autopilot.

During World War I, a French aviator on special night operations cut his engine at 10,000 feet and glided down in close circles over enemy lines, full moon overhead.

‘We suddenly found ourselves,’ he wrote, ‘among a strange flight of birds which seemed to be motionless, or at least showed no noticeable reaction. They were widely scattered and only a few yards below the aircraft.’

He had flown into a small party of swifts in deep sleep. He managed to catch two, and one swift was later pulled dead from the engine. The remote air, coldness, stillness and the high birds over white cloud suspended in sleep. It’s an image that drifts in and out of my dreams.

In 1979, the aviator and ecologist Luit Buurma made radar observations that showed vast flocks of swifts gathering low over waters of the Ijsselmeer off the Netherlands every evening to feed upon midges. 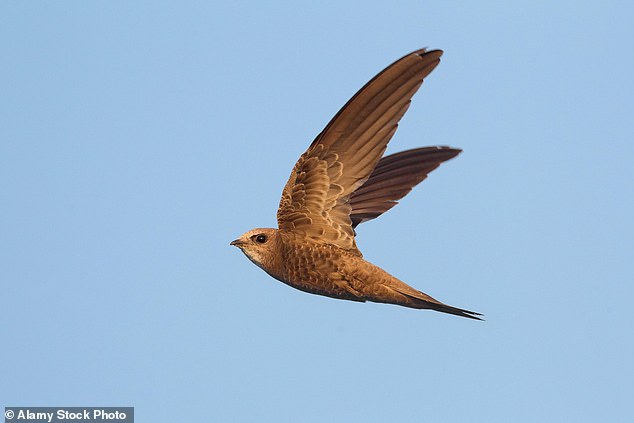 They are creatures of the upper air, and of their nature unintelligible, which makes them more akin to angels

Just after 10pm they began to rise, until all were more than 600 feet high. Then the ascent began: five minutes later they were out of sight, and their vesper flights took them to heights up to 6,000 feet.

Buurma made another discovery: Swifts weren’t just making vesper flights at dusk, they made them again just before dawn. Twice a day, when light levels exactly mirror each other, swifts rise and reach the apex of their flights at nautical twilight.

Others have since studied these ascents. The ecologist Adriaan Dokter and his colleagues have written that swifts’ vesper flights take them to the top of the atmosphere’s convective boundary layer, where the ground’s heating by the sun produces rising and falling currents, blossoming thermals of hot air.

Once swifts crest the top of this layer, they are exposed to a flow of wind unaffected by the landscape below, one determined instead by the movements of large-scale weather systems.

By flying to these heights, swifts can see the distant clouds of oncoming frontal systems on the twilit horizon, and they can use the wind to assess the possible future courses of these systems. What they are doing is forecasting the weather.

And they are doing more. Migratory birds orient themselves through a complex of interacting compass mechanisms. 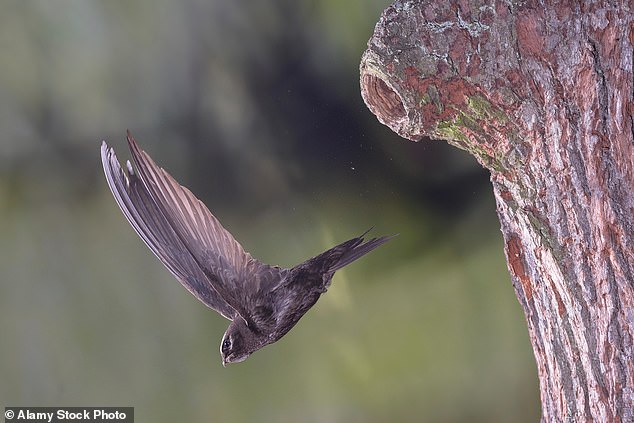 During vesper flights, swifts have access to them all. They can see the scattered patterns of the stars overhead, and calibrate their magnetic compasses, getting their bearings according to the light-polarisation patterns that are strongest and clearest in twilit skies.

Stars, wind, polarised light, magnetic cues, the distant stacks of clouds a hundred miles out, clear cold air, and below them the hush of a world tilting toward sleep or waking toward dawn.

What they are doing is flying so high that they can work out exactly where they are, to know what they should do next. They’re quietly, perfectly, orienting themselves.

The behavioural ecologist Cecilia Nilsson and her team have found that swifts ascend in large flocks every evening before singly drifting down, while in the morning they fly up alone and return to earth together.

She and her colleagues hypothesise that on vesper flights, swifts work according to the ‘many-wrongs principle’. That is, they average their individual assessments to reach the best navigational decision.

If you’re in a flock, decisions about what to do next are improved if you exchange information with those around you.

We can speak to one another; what swifts do is pay attention to what other swifts are doing. They follow one another.

All of which makes it even more painful that swift numbers are in decline on these shores — down by more than half since 1995 — a result of falling insect populations combined with the destruction of their nests as buildings are demolished or renovated.

Thinking about swifts has made me think more carefully about the ways I deal with difficulty. And with this pandemic’s terrifying grip on the globe, my usual defences against difficulty have begun to feel uncomfortably provisional and precarious.

Swifts have, of late, become my fable of community, teaching us about how to make right decisions in the face of oncoming bad weather.

They aren’t always cresting the atmospheric boundary layer at dizzying heights; most of the time they live below it in thick, complicated air. That’s where they feed and mate and bathe and drink and are.

But to find out about the important things that will affect their lives, they must go higher to survey the scene, and there communicate with others about the larger forces impinging on their realm.

Not all of us need to make that climb, just as many swifts eschew vesper flights because they are occupied with eggs and young — but surely some of us are required to look clearly at the things obscured by the everyday? To take time to see the things we need to set our courses toward or against.

When I read the news and grieve, my mind has more than once turned to vesper flights, to the strength and purpose that can arise from the collaboration of numberless frail and multitudinous souls.

Related posts:
Lionsgate Vice Chairman: Pandemic Changed Theatrical Business Forever
Gigi Hadid's Father Mohamed Makes Fans Think She Already Gave Birth!
Popular News
Boris Johnson told he will be ‘gone after Brexit’ in dire forecast over political future
29/09/2020
Stuart Broad builds up to second Virtual Test with Sri Lanka
26/03/2020
Bindi Irwin Made Last-Minute Changes to Her Wedding Due to Coronavirus Lockdown
26/03/2020
Widow on The Repair Shop leaves viewers sobbing
26/03/2020
Coronavirus lockdown: Global quarantine reveals weird fact about humanity
26/03/2020
Recent Posts
This website uses cookies to improve your user experience and to provide you with advertisements that are relevant to your interests. By continuing to browse the site you are agreeing to our use of cookies.Ok