Gaza City: Gaza’s Hamas rulers said on Monday they have reached an agreement through international mediators to end the latest round of cross-border violence with Israel.

Under the deal, Hamas is to halt the launches of explosives-laden balloons and rocket fire into Israel, while Israel said it will ease a blockade that has been tightened in recent weeks. The Israeli restrictions have worsened living conditions in Gaza at a time when it is coping with a new coronavirus outbreak. 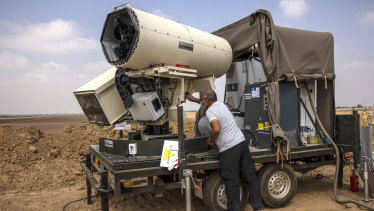 An Israeli police officer demonstrates a new laser defence system designed to intercept explosives-laden balloons launched from the Gaza Strip into Israel, on the Israeli Gaza border, on Sunday.Credit:AP

As a result of indirect mediation efforts led by Egypt, the United Nations and Qatar, Hamas said "several projects will be announced to serve our people in Gaza Strip and contribute in mitigating” difficult living conditions.

Its statement didn't detail any of the projects but it said conditions would return to “what they were before the escalation.”

Under previous, unofficial understandings reached through intermediaries, Hamas has sought a broader easing of restrictions on movement, increased power supplies from Israel and large-scale economic projects to help lower unemployment hovering around 50 per cent. It accuses Israel of moving too slowly or not honouring its commitments.

COGAT, an Israeli defence body responsible for Palestinian civilian affairs, announced late on Monday that it would immediately reopen Gaza's only cargo crossing and resume fuel shipments into the territory. It also said it would reopen a 25-kilometre fishing zone off Gaza's coast. 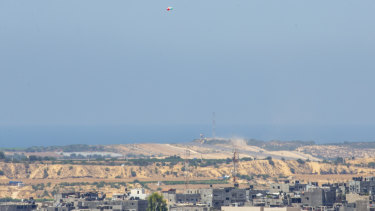 Balloons (top of the photo) carrying an incendiary device launched from the Gaza Strip drift to the Israeli side of the border between Gaza and Israel.Credit:AP

“This decision will be tested on the ground: if Hamas, which is accountable for all actions that are taken in the Gaza Strip, fails to stand its obligations, Israel will act accordingly,” it said.

The UN envoy to the region, Nickolay Mladenov, welcomed the agreement.

“Ending the launching of incendiary devices and projectiles, restoring electricity will allow #UN to focus on dealing with the #COVID19 crisis,” he tweeted.

Israel and Hamas are bitter enemies that have fought three wars and numerous skirmishes since the Islamic militant group seized control of Gaza in 2007. Israel and Egypt have maintained a blockade of Gaza since the Hamas takeover, saying the restrictions are needed to prevent Hamas from arming. 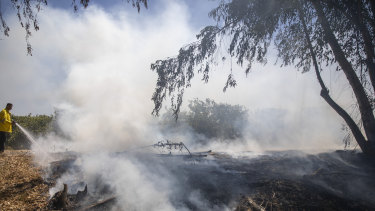 A firefighter attempts to extinguish a fire started by an incendiary device launched from the Gaza Strip, on the Israeli side of the border between Israel and Gaza earlier this month.Credit:AP

Israel has responded with tank fire and airstrikes on militant targets, while closing Gaza's only cargo crossing, cutting off fuel supplies to the territory's only power plant, and halting access to fishing waters. Residents had been left with just four hours of electricity a day during the sweltering summer.

Related posts:
Chocolate sales spike during lockdown, surpass overall candy sales
Kentucky ‘frat house’ judge kicked off the bench
Popular News
What classic girl band stars did next – arson, cocaine and unspeakable tragedy
06/05/2021
Stuart Broad builds up to second Virtual Test with Sri Lanka
26/03/2020
Bindi Irwin Made Last-Minute Changes to Her Wedding Due to Coronavirus Lockdown
26/03/2020
Widow on The Repair Shop leaves viewers sobbing
26/03/2020
Coronavirus lockdown: Global quarantine reveals weird fact about humanity
26/03/2020
Recent Posts
This website uses cookies to improve your user experience and to provide you with advertisements that are relevant to your interests. By continuing to browse the site you are agreeing to our use of cookies.Ok