Home » World News » Goodbye, concrete and steel? Why timber towers could be the future

Goodbye, concrete and steel? Why timber towers could be the future

A Melbourne development has joined a push to grow the Australian timber tower movement and reduce the construction industry’s massive environmental footprint, but higher costs and fears of fire risks continue to pose obstacles.

Collingwood will soon be home to a 15-storey hybrid timber office tower – one of Australia’s tallest timber buildings – where 10 levels are made entirely from wood above four concrete floors. 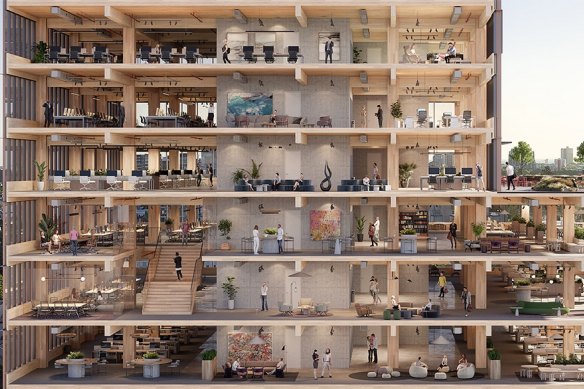 An artist’s impression of Hines’ T3 Collingwood, set to be completed in September 2023.

The tower, called T3 Collingwood and developed by global real estate company Hines, is one of a handful of recent major mass timber developments in Australia that could signal the country is catching on to a trend well-established in the US and Europe.

About 3500 cubic metres of wood will be used in T3 Collingwood’s structural frame by the time of its expected completion in September.

It sounds like a lot of tree-felling, but some experts say timber construction is crucial to cutting carbon emissions and creating a smoother building process.

Globally, the steel, cement and aluminium industries each produce about 8 per cent of annual greenhouse gas emissions. The only emissions associated with using wood as a building material are from the machinery used to process and transport it. 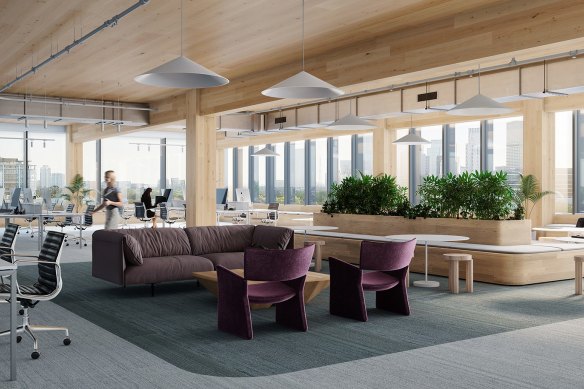 An artist’s impression of one of the floors inside Hines’ T3 Collingwood tower.

In November, the federal government announced a $70 million investment in the Hines development, making it the first to be financed under the government’s $300 million program to help kickstart mass timber construction.

Hines managing director Simon Nasa said a company analysis showed the Collingwood tower would have a 40 per cent lower embodied carbon footprint – the greenhouse gas emissions associated with construction – than an equivalent structure made of concrete and steel.

“There’s a substantial amount of carbon that’s produced in manufacturing steel and concrete, whereas timber actually sequesters carbon [in its growth phase] and it stays a natural carbon store,” Nasa said.

Up to half of wood’s dry weight is carbon that’s been removed from the air, and Nasa said Hines was using timber that was sustainably grown and milled in Victoria to reduce transport-related emissions. 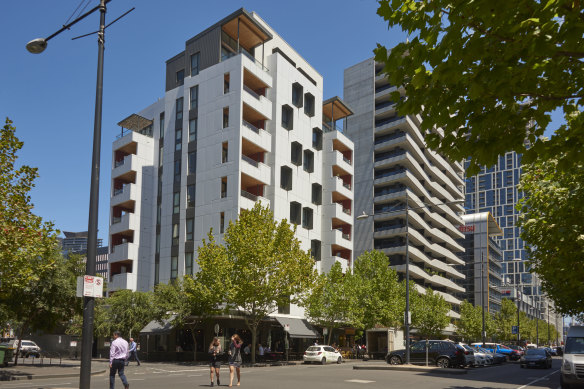 The Lendlease Forte apartment building in the Docklands.

He said a key challenge for Australia’s timber construction industry was its limited supply chain, but this was changing with more investment and new players in production and manufacturing.

“The fallout from the flammable cladding issue saw a ratcheting up of regulation and fear permeating the industry. It spooked a lot of developers from pursuing more innovative construction work,” Fergus said.

He said wood didn’t lose its structural strength when it caught fire, and the beams used were deliberately very thick because once a layer of timber is charred, it protects the layer beneath.

Belperio said many developers were reluctant to try new design processes, and timber construction cost up to 10 per cent more than steel and concrete.

However, he said it was a “much more efficient and effective way of building” because all the parts were designed and fabricated off-site before being delivered and swiftly assembled by a workforce that was roughly six times smaller.

“So what you’ve got is a very safe, quiet, respectful worksite,” Belperio. 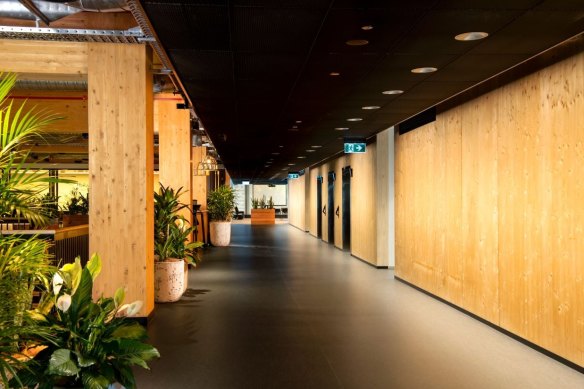 The lobby at Lendlease’s all-timber building at 25 King Street, Brisbane.

Belperio is exploring methods to reduce costs – such as automating screw installation using robots – to help propel timber construction’s shift from being niche to mainstream.

“I’m hopeful that we would see that within five to 10 years.”

Green Building Council Australia recently announced that by 2030, new buildings seeking a green star rating would need to demonstrate a 40 per cent reduction in embodied carbon, a target up from 10 per cent.

“Timber is really the only truly mainstream sustainable building material that we have,” Belperio said.

Australian Sustainable Hardwoods managing director Vince Hurley has 200 staff at his timber company in Heyfield, where whole logs from certified regrowth plantations or fire-salvaged trees are cut into structural columns and beams.

Hurley, who said his business had a negative carbon footprint, blamed the lack of industry acceptance and training for impeding the growth of timber buildings in Australia.

Research suggests timber buildings are mentally beneficial to people who work and live in them because the wood structure is exposed, and connection to nature can reduce stress levels – a phenomenon known as “biophilia”.

“The environment feels much more natural than it would if it was just a hard concrete wall,” Nasa said.

David Rowlinson, campaign manager for Planet Ark’s Make It Wood, has long advocated for responsibly sourced timber to be used as a building material for large-scale projects instead of concrete and steel.

Planet Ark opposes the logging of native forests, and Rowlinson said most of the timber used in commercial construction was certified as sustainably managed by an independent body.

“The important thing about plantation forests is not to replace native forests but to complement them,” he said.

“An average frame and truss house in Australia would consume 12 cubic metres of pine and that can be regrown in Australia’s overall plantations in 2.5 minutes.”