Famous Chicago homeless person ‘The Walking Man’, 75, is expected to die after thug, 27, doused him in gas as he slept before setting him on fire and leaving him to burn for THREE MINUTES outside Trump Tower

A homeless person from Chicago who is known as ‘The Walking Man’ is expected to die after being doused in gasoline and set on fire outside Trump Tower.

Joseph Kormelis, 75, who is famous in the city for wandering around with long hair and a mustache, was allegedly torched by Joseph Guardia, 23, for three minutes.

The thug is said to have spotted him sleeping under some blankets on a sidewalk before checking if any drivers were around and then igniting him at 3am on May 25.

Guardia, of Melrose Park, who has a dollar sign tattoo on his face, was arraigned on charges of attempted first degree murder and aggravated arson on Monday. 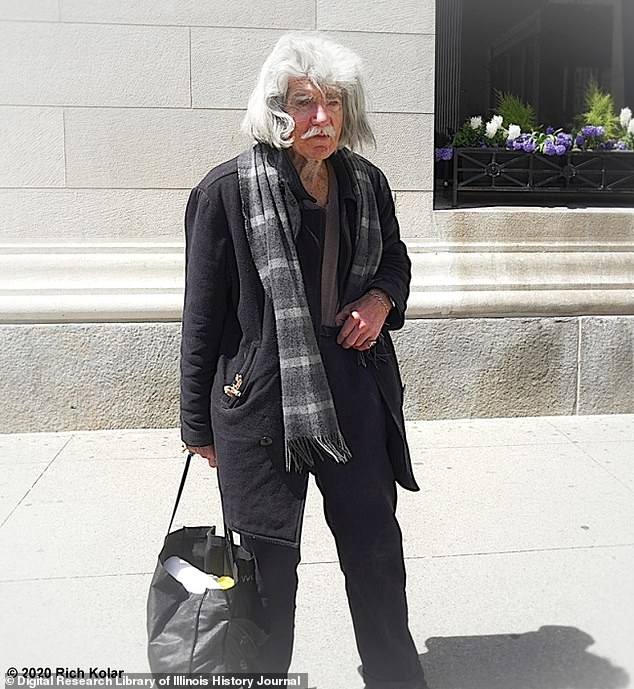 Joseph Kormelis,75, who was horribly burned over 50 percent of his body, always stuck a dapper figure despite being homeless 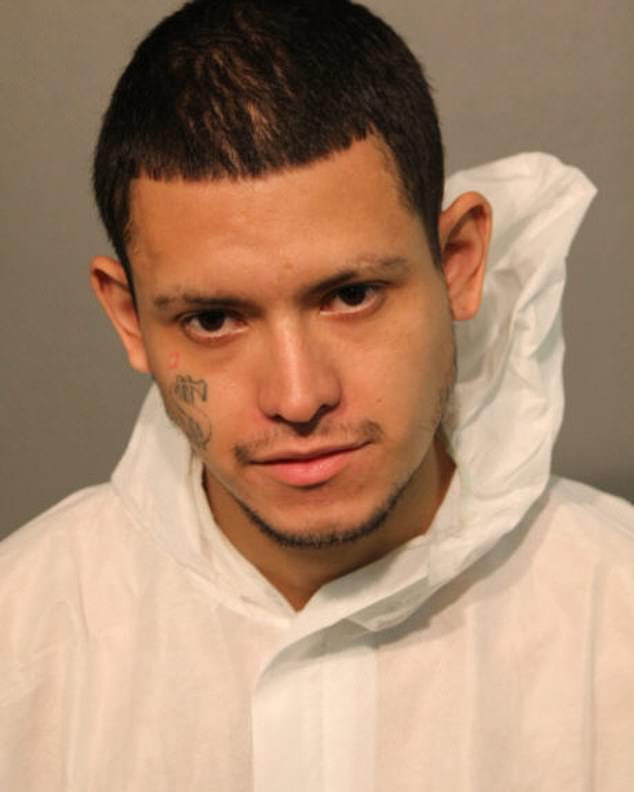 Joseph Guardia, 23, of Melrose Park, a self-described ‘angry person’ is accused of setting Joseph Kormelis, 75, a homeless man on fire 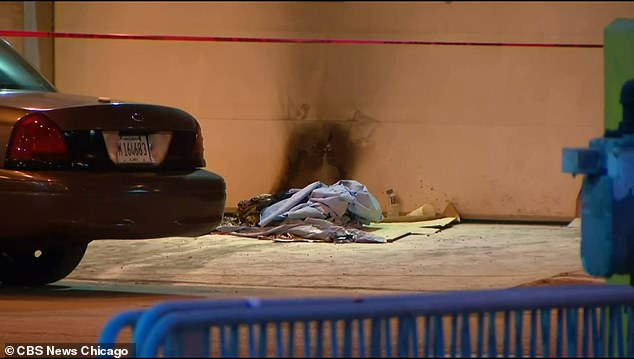 There’s no history between the two men, according to the prosecutor, Guardia told police that he had found a McDonald’s cup full of gasoline and decided he wanted to set something on fire. He claimed not to know that Kormelis was under the blankets despite surveillance footage showing his arms and legs sticking out from the covering.

After being set alight, Kormelis stood up and began thrashing around trying to put himself out, the prosecutor said, at which point Guardia fled. Despite his attempt, flames spread to his lower torso so that his whole body from the waist up was engulfed.

Kormelis was on fire for three minutes while no one helped until a security guard noticed the shocking scene on his surveillance monitor and rushed out with a fire extinguisher to douse the flames.

Kormelis was rushed to Stroger Hospital on the morning of the attack with ‘severe burns to more than 50 percent of his body’ the prosecutor said. ‘He is not expected to recover.’ 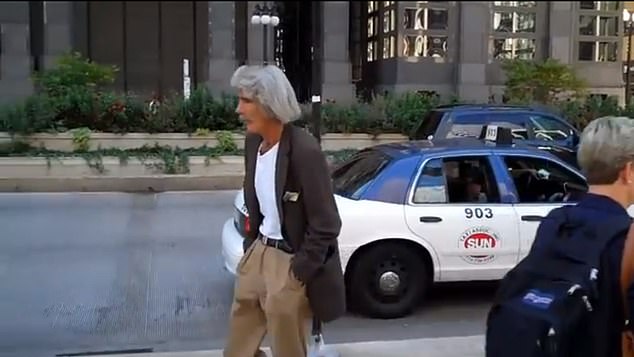 Joseph Kormelis, 75, has been seen around Chicago for years walking around the city and has been given the name ‘The Walking Man’ He is expected to succumb to injuries that he suffered when he was set on fire on May 25 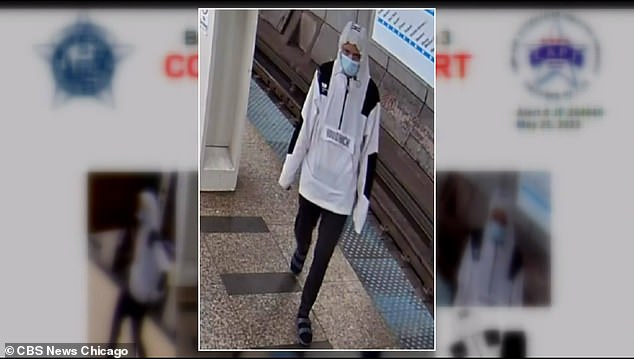 Police released this video surveillance footage of Joseph Guardia sporting a hoodie with the words ‘HOOD RICH’ printed on the front. This is believed to be after he set Kormelis on fire 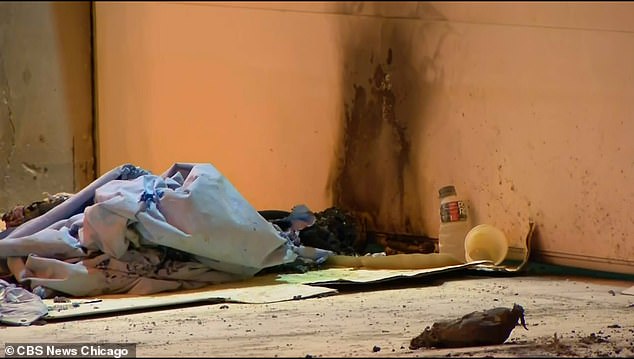 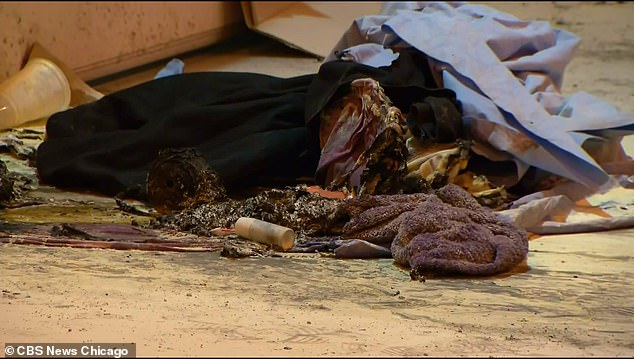 Kormelis stood up after being set on fire and tried to douse himself of the flames, but he burned for three minutes, according to the Cook County prosecutor

The Walking Man, also dubbed ‘The Walking Dude’ has been likened to actor Richard Gere and the Greek composer Yani. He was raised in Chicago and sold jewelry on the street. He lived in a single-room-occupancy apartment until it was converted to a luxury apartment building.

Chicagoans consider him as much a part of the city as the public statue referred to as the Bean or Wrigley Field or the Dan Ryan Expressway.

He was attacked at random once before in 2016, when he was also hospitalized, but eventually recovered.

Police studied surveillance footage and zeroed in on two distinguishing characteristics to pin the crime on Guardia – his face tattoo and a white and black hoodie with the words ‘HOOD RICH’ printed on the chest.

Detectives tracked a chain of surveillance footage that track Guardia through the Chicago subway system to O’Hare Airport and back to the neighborhood of Forest Park. He was caught on camera catching a bus home to Melrose Park that morning.

A police officer who is a neighbor of Guardia recognized him from a police bulletined with photos from the surveillance footage. The same officer moonlights at a plasma center where Guardia had been three days earlier wearing the same outfit.  The suspect returned the plasma center similarly attired the day after the arson. 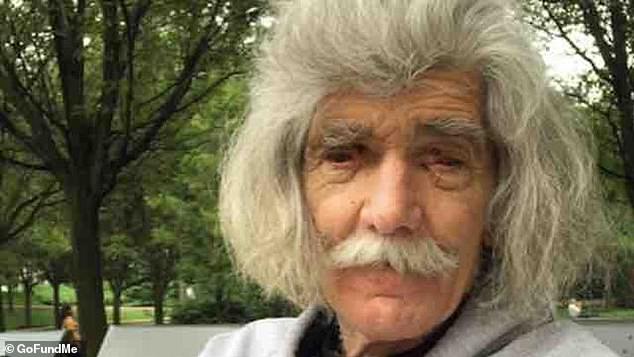 ‘The Walking Man’ Joseph Kormelis, 75, has been likened to the Greek composer, Yani, was part of the Chicago streetscape

Kormelis was raised in a big family in Chicago. He tried his hand at various jobs, but mostly peddled jewelry on the street 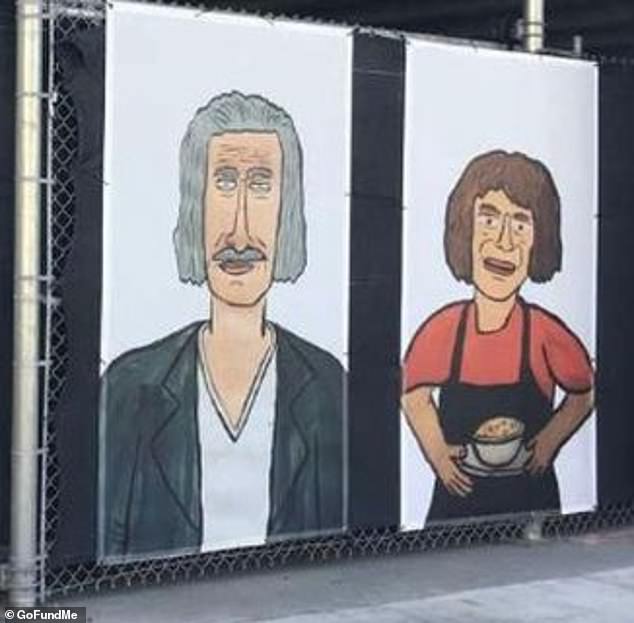 He was arrested on May 27 and during the police interrogation he claimed to have found the cup of gas and had no mal intent toward Kormelis.

‘The defendant did not provide any specific motive other than being an angry person,’ Hanichak said.

During Guardia’s arraignment on Monday, the prosecutor urged the judge to keep the suspect behind bars because of the heinous attack.

‘It takes a special kind of evil to do what the defendant did in this case. For 16 seconds he stood over the victim at close range. His statement that he didn’t know a person was there is outrageous and is a lie,’ Hanichak said.

‘This defendant chose to pour gasoline on a human being and then set him on fire leaving him to burn alive for three minutes. One can only imagine the pain and suffering the victim experienced in those three minutes.

‘A 75-year-old homeless man sleeping on the street. In 16 years of prosecuting cases I’ve never seen a video so horrific.