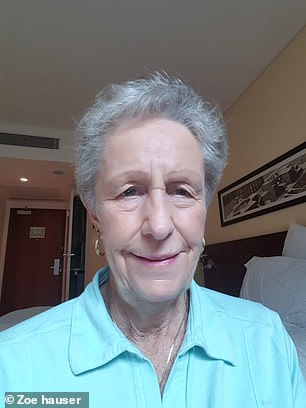 Zoe Hauser, 67, in a New Delhi hotel where she is being quarantined for 21 days

Fears are growing for an elderly British school principal who is being held in a New Delhi hotel during India’s coronavirus lockdown.

Zoe Hauser, 67, has developed a high temperature and her concerned family is pressing the Foreign Office to help end her solitary confinement.

She has been banned from leaving her room, which has a sealed window, and is the only European among around 300 Indian detainees.

Ms Hauser, who has taught in Britain and the United States and moved to India in 2015, has two children and five grandchildren.

She was returning to Mumbai from a week’s holiday in Nepal when she landed in New Delhi to transfer flights last Saturday.

She said: ‘I had been on an international flight and had to go through immigration. The lines were enormous and it took around four hours. 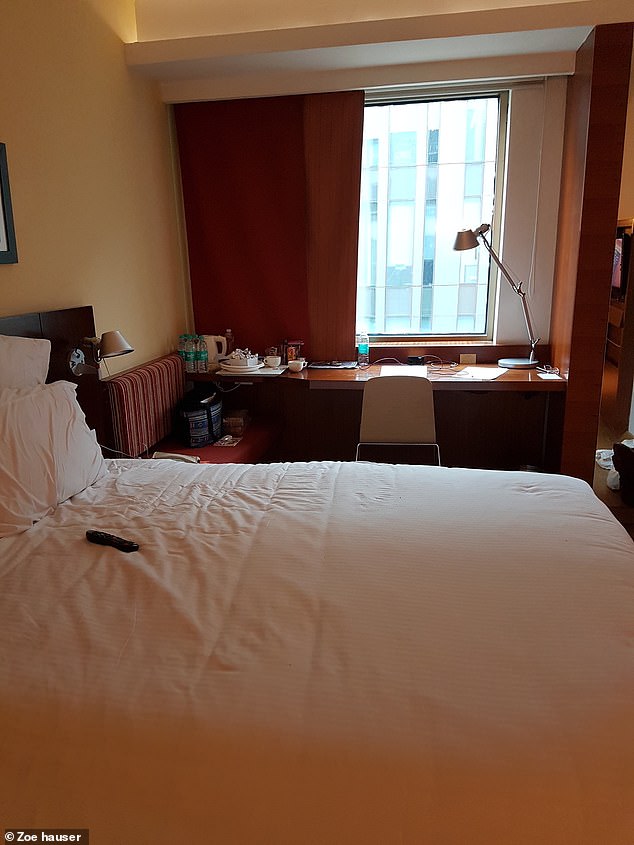 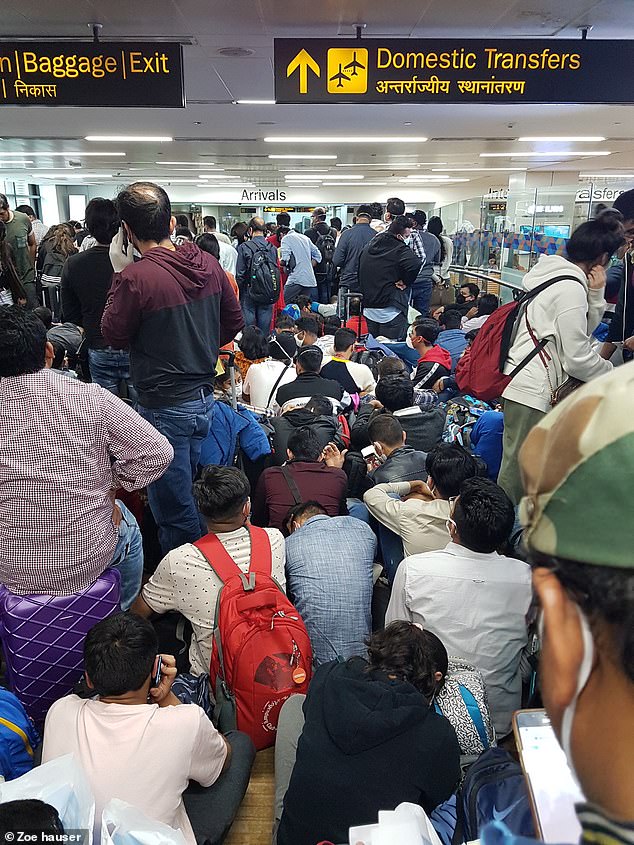 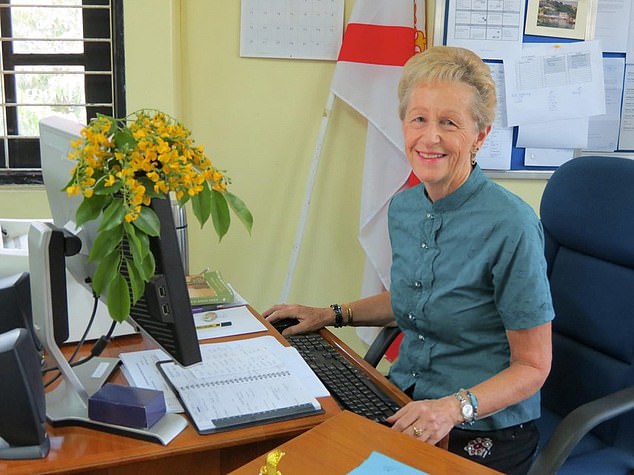 Grandmother Zoe Hauser, 67, poses at her school desk before the Coronavirus epidemic

‘There were thousands of people jammed together in highly dangerous proximity, with no food and no knowledge of what was happening.

‘Then the immigration officer took my passport away and I haven’t seen it since.

‘I was moved around the airport for a total of 11 hours before I was taken into a room, where two doctors in full protective clothing were distanced at the other end of a table.

‘They said they were there for “health screening”, which was nothing but questions about travel and medications, information that I had already provided on three forms during those hours of waiting.’

She added: ‘They asked me if I had any symptoms and I said I hadn’t. But they still decided I was “vulnerable” because of my age.

‘I was forcibly separated from my friends and I was put onto a bus and was on there not knowing what was happening for around another three hours.

‘The officials told me everybody over the age of 60 must be in government quarantine.

‘A few hours later, they dumped me in a tiny, dark hotel room with no information and no fresh air. I have been here ever since and I only have my iPad and phone to contact the outside world.

‘I went into the corridor yesterday to try and stretch my legs and the guards who are wearing hazmat suits yelled at me.

India deems people over the age of 60 to be senior citizens or of an age when they can retire or be offered discounts on travel.

Ms Hauser said all the detainees being held at the hotel were over the age of 60, except for one Indian man in his early forties who had told officials he was on blood pressure tablets.

She added: ‘India is in full shutdown and I am going to be here for 14 days. But then I will have nowhere to go, as hotels are closed and flights have been stopped for 21 days.

‘It is a living nightmare and the worst part of it is that I can’t isolate under my own terms.’ 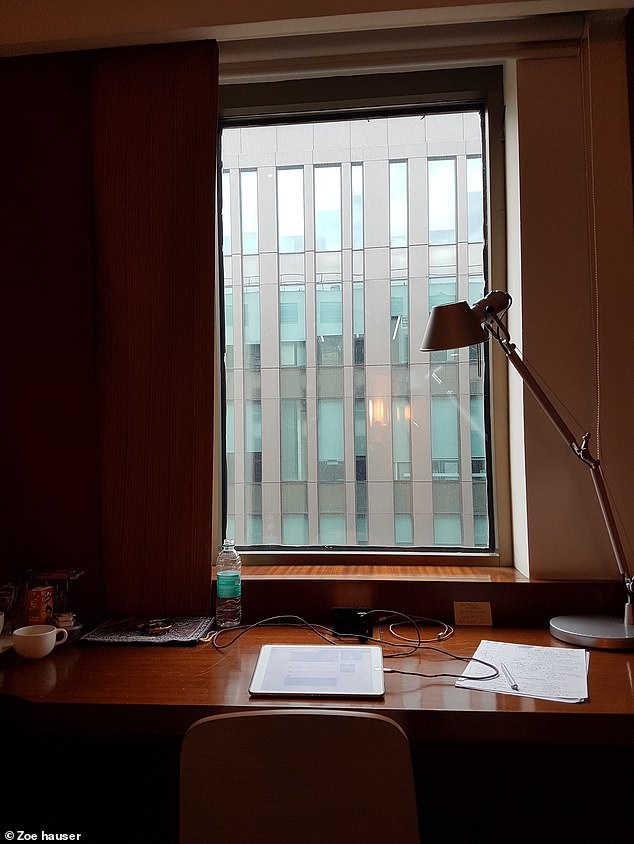 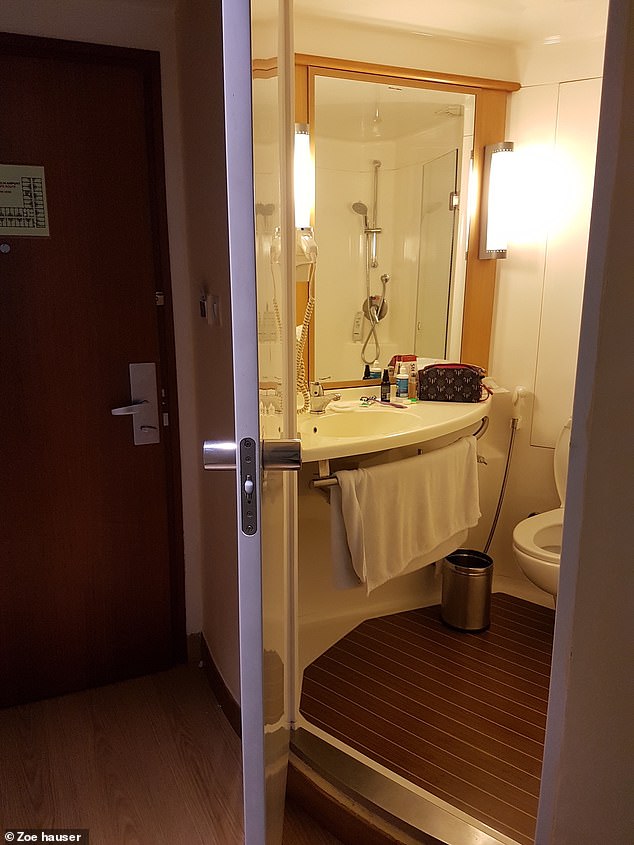 Ms Hauser said she has now developed a temperature of 37.8C (100F). On Saturday morning, she was visited by a doctor and a counsellor, who gave her paracetamol and promised to monitor her condition regularly.

Ms Hauser said the food she is being given consists of cold rice, chapati and dhal and that she hand-washes her clothes in the tiny bathroom sink.

The respected headmistress added: ‘I dream of being in my lovely home and at school. Teachers have sent me lovely video messages, making me cry.

‘I am grateful for my loving, but worried, family members and the school community.’

Her sister Sandra Connor, who lives in High Wycombe, said: ‘We have been in touch with the Foreign Office and the British Embassy in Delhi.

‘I am very worried about Zoe, as she is claustrophobic and it will be very difficult for her to be in that tiny space where she cannot even open the window.’

To cope with the ordeal, Ms Hauser has set up a number of video conferences with fellow teachers who are also in lockdown at their homes in Mumbai.

MailOnline has contacted the Indian High Commission for comment.

Mum shares clever hack to make stick-figure come to life – and all you need is a whiteboard pen and water
Rob Kardashian Might Have Just Dropped a Major Hint At His Return to 'KUWTK'
Popular News
Thousands of people to get £200 direct payment in bank account within days to help with energy bills – how to get it | The Sun
03/07/2022
Stuart Broad builds up to second Virtual Test with Sri Lanka
26/03/2020
Bindi Irwin Made Last-Minute Changes to Her Wedding Due to Coronavirus Lockdown
26/03/2020
Widow on The Repair Shop leaves viewers sobbing
26/03/2020
Coronavirus lockdown: Global quarantine reveals weird fact about humanity
26/03/2020
Recent Posts