Miltch Pierre, who works at a nearby Blaze Pizza, told FOX 25 he felt the ground start shaking while he was making pizzas.

“Everything started shaking over there and when I looked over, I was just a bunch of smoke. … I saw someone holding their neck. One girl had blood all over her face and her chin. Pretty gruesome.”

“One girl had blood all over her face and her chin. Pretty gruesome.”

Green Line Service on the B Branch was temporarily suspended after the collision.

Four train operators from both trains were among those hurt, according to FOX 25 in Boston. The MBTA said passengers were assisted from the trains by emergency responders.

“Our thoughts are with the riders and employees injured in this incident,” the agency wrote in an online post.

The MBTA continued: “The safety and well-being of our riders and employees is our chief priority. We take this matter extremely seriously and are actively investigating the incident to understand what occurred, and prevent it from happening again. We will provide updates as they become available.”

The victims’ conditions were not updated.

Both trains were traveling westbound when one train rear-ended the other, according to FOX 25. 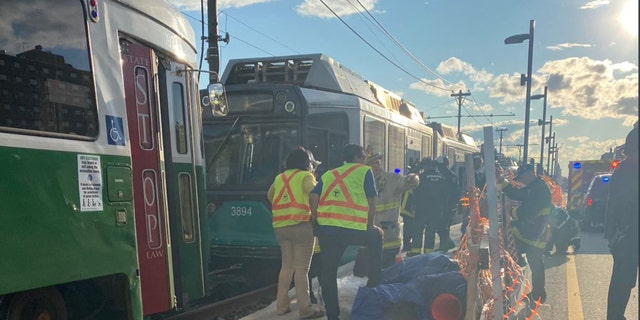 The cause remained under investigation.

“We will obviously get to the bottom of this,” MBTA General Manager Steve Poftak said, according to NECN-TV in Boston. “This should not happen and we will find out why it happened and will ensure that it won’t happen again.”

Poftak said speed could be a factor since the speed limit where the crash happened is 10 mph, according to FOX 25. It could also be operator error or a mechanical malfunction, he said.

“The only conclusion we can draw is obviously, at some point, they became too close together,” Poftak told NECN. “That’s a situation that should not happen.”