A new offence carrying a fine of $4957 will be introduced in Victoria to deter people from leaving metro Melbourne and travelling into regional parts of the state.

Failing to comply with a requirement to remain in a restricted area will be a new offence set to come into force in Victoria overnight. 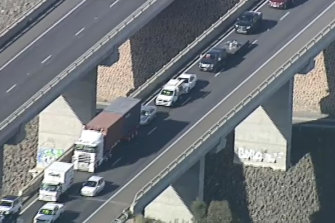 Traffic was banked up in Bacchus Marsh on Tuesday.Credit:Nine News

"That is quite a significant fine and clearly aimed to deter people from the Melbourne metro area [travelling to regional areas]," Deputy Commissioner Rick Nugent said on Wednesday.

"We don't want the virus to spread again in the rural areas."

From 11.59pm on Wednesday, regional Victoria will move to step three in the government's road map.

Mr Nugent said if it multiple people are caught leaving metro Melbourne together they would all be fined the full amount and told to go home.

Police will be increasing their patrols of checkpoints, particularly during the school holidays, to catch anyone from metro Melbourne trying to holiday in the regions.

There will also be increased patrols of caravan parks and boat ramps and police will be checking all cars towing caravans or boats.

"We absolutely have a role in this to ensure those deliberately, blatantly breaching restrictions are caught and appropriately fined," said Mr Nugent.

Related posts:
Mulatto Canceled After Calling Her Darker-Skinned Friend ‘Orangutan’
DiW Drops a New $48,000 USD Carbon-Lime Daytona Watch
Popular News
Boris Johnson told he will be ‘gone after Brexit’ in dire forecast over political future
29/09/2020
Stuart Broad builds up to second Virtual Test with Sri Lanka
26/03/2020
Bindi Irwin Made Last-Minute Changes to Her Wedding Due to Coronavirus Lockdown
26/03/2020
Widow on The Repair Shop leaves viewers sobbing
26/03/2020
Coronavirus lockdown: Global quarantine reveals weird fact about humanity
26/03/2020
Recent Posts
This website uses cookies to improve your user experience and to provide you with advertisements that are relevant to your interests. By continuing to browse the site you are agreeing to our use of cookies.Ok