Home » TV and Movies » Raúl Castillo Can Empathize With Ambivalence

Raúl Castillo Can Empathize With Ambivalence

In “The Inspection,” he plays a drill instructor who takes a bullied recruit under his wing, the kind of nurturing the actor says he has benefited from as well. 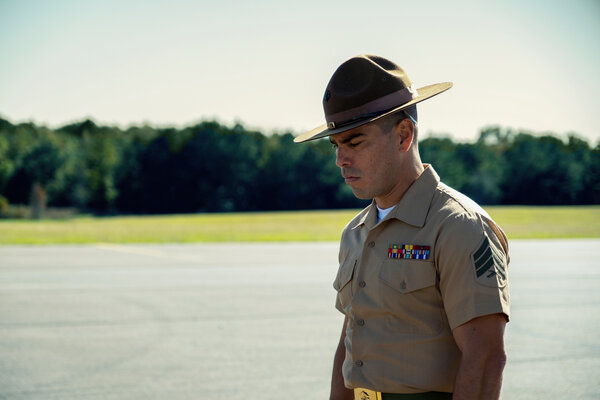 At a Tribeca Film Festival party in 2018, Raúl Castillo met the filmmaker Elegance Bratton and gave him his number. But he never responded to Bratton’s subsequent texts.

“I spread myself a little too thin saying yes to too many things,” Castillo, 45, said in a video interview from Brooklyn last month. “I was learning what it is to make yourself too accessible.”

Three years later, Castillo was sent the script for “The Inspection,” a movie based on Bratton’s experiences as a young gay man who, after being kicked out of his home by his disapproving mother, opts to join the Marine Corps — a decision that exposes him to beatings, bullying and violent homophobia within its ranks.

Castillo read it in one sitting and loved it. But feeling sheepish about his earlier lack of response, he didn’t contact Bratton but instead put a tape together and sent it off.

“I was hoping he was still interested in me for the role,” he said. “Thankfully he was.”

Castillo was cast as Rosales, a drill instructor who — as the Iraq and Afghanistan wars rage and “don’t ask, don’t tell” remains in effect — recognizes potential in the downtrodden recruit, Ellis French (Jeremy Pope). He is determined to help him succeed where almost everyone else, including Rosales’s merciless superior, Sgt. Laws (Bokeem Woodbine), has set him up for failure.

The Oscars aren’t until March, but the campaigns have begun. Kyle Buchanan is covering the films, personalities and events along the way.

It was a role that Castillo, who grew up in Texas near the Mexican border and was the first in his family to go to college, felt in his bones. He had been on the other side as a student with discipline problems at Boston University, where a Black professor came to his rescue.

“He took me under his wing when I needed it most and gave me some hard love,” Castillo said. “He recognized and saw me at a time where I felt very unrecognized and very unseen.”

Previously one of the stars of the HBO television series “Looking,” Castillo had a busy 2022, with roles in the movies “Hustle” and “Cha Cha Real Smooth” in addition to “The Inspection.” He answered three questions about Rosales and what draws him to such complicated characters. These are edited excerpts from the conversation.

How do you think Rosales challenges gender norms?

Rosales is a very loyal Marine. He respects his superior officers until he’s pushed to question their authority. He takes his job very seriously, to the point where it jeopardizes his home life. He’s put in this tough position of having to choose. But I think in the recruit of Ellis French he sees an opportunity to build someone up who’s at a crossroads in their life. I think he sees real potential in him, and he makes him kind of his personal project.

When I read the script, I was very moved by their relationship and this nuanced portrayal of masculinity. French is used to these transactional relationships with other men. And Rosales is the first relationship that he has with another man that isn’t transactional in nature but is genuine. I thought on the page it was so well done that if we could pull it off onscreen, we’d have a really interesting story line.

I think masculinity is ambivalent. We try to draw these hard lines of what it is to be a man, and I find that to be so counterintuitive. I like characters that sort of blur the line. And that was my take on Rosales. There was an ambivalence to him.

I’ve always, as a person, lived in those spaces. I come from an environment that was really machista and very patriarchal, and I didn’t necessarily ascribe to those traditional notions of masculinity. I got teased a lot growing up, and I feel like there was a lot to identify with in the character and that ambivalence.

What do you see as the source of his power?

What appealed to me about Rosales was this familiar relationship between two men of color in this institution, and the way that Rosales sees potential in French and is compassionate toward him.

He has a real sense of justice and a sensitivity to power dynamics. He’s someone who looks out for an underdog. As a child of immigrants myself, I’m always really sensitive to the people in the room who have the least power, and I feel like I try to look out for those people.

That really moved me in this story line. I think Rosales has a similar kind of relationship to power. I think he respects the power that he has. But I don’t think that he believes in abusing it. That’s where the friction between Rosales and Laws stems from. They view power in totally different ways.

Why should people watch “The Inspection”?

It’s the kind of story we need right now. “The Inspection” has a potential to provide healing and catharsis for people who maybe have gone through similar situations or who have family members who have gone through situations like French. A lot of the themes in the film are very universal. “The Inspection” takes the traditional form of a boot-camp movie and makes it incredibly entertaining. There’s a heavy, dramatic side of the film, but it’s also incredibly funny. It defies expectations of what a military film can be.

We haven’t seen a character like this. We certainly haven’t seen a brown man this layered and with this much humanity. Elegance gave me a great gift and a wonderful character that we don’t get to see often, the way that these two men find each other and learn from one another. I think it’s a very fresh perspective on masculinity, and I think that’s why it’s resonating for people.