Home » TV and Movies » John Sergeant: ‘It’s my wife on the front line now… as a Samaritan’

John Sergeant: ‘It’s my wife on the front line now… as a Samaritan’

But now John Sergeant reveals that it’s his devoted wife Mary Smithies who is out in the frontline, as a volunteer for the Samaritans. John, who was also a hit on Strictly Come Dancing, says Mary is working long days while he, as an over-70, is forced to self-isolate. He said: “I am 75 but I am not high risk in that I don’t have an underlying health condition but even saying the words ‘high risk’ sounds exciting and I can imagine being out there going ‘Stand aside’ and then flashing my press card.

“But those days are long gone and now it’s about my wife who is doing her own bit to tackle the coronavirus as a volunteer for the Samaritans working 12-hour shifts.”

Last week, the Samaritans, which has been classed as an “essential service”, vowed to keep its call lines open during the coronavirus pandemic after suspected suicides of a nurse and infected patients and John admits how proud he is of his wife in supporting those affected.

“Every day she goes out on her shift but the only problem is that I have to do the cooking because that is part of the deal and then she behaves like, ‘It’s been a hard day at the office’.

“Bless her, she has worked incredibly hard and, for now, we are both OK until one of us catches it, which will be a disaster.

“Mary is the most amazing cook but, for now, I’ve had to learn new skills which involve things like deboning and stuffing a shoulder of lamb or making the perfect beef and ale pie, so I’ve certainly gained a few notches on my apron strings.

“I’ve always secretly loved cooking. A couple of nights ago I made sea bass fillets with ratatouille sauce. It was delicious.” John has urged the supermarkets to do more to help make sure everyone gets what they need.

“I don’t think you want ration books but what you want is the supermarkets to keep purchase restrictions to a maximum of three of each item,” he says. “I went to buy paracetamol and was told I could only have two packs.” 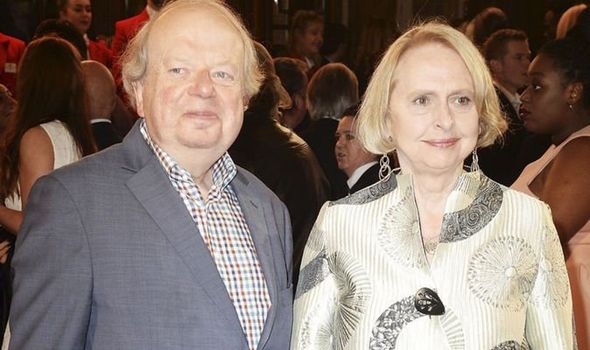 Having recently celebrated his 51st wedding anniversary, John admits he was lucky to enjoy a weekend with Mary (with whom he has two grown up sons) in France before lockdown.

“I’m so relieved we managed to celebrate our anniversary before the lockdown and we managed to get to Lyon in January. For some reason, we decided to get married on January 4 and we thought it was a normal time.

“We could never have imagine that France a month after our trip would be on lockdown and that is so extraordinary. It is not so much surreal but it is definitely unreal.

“We are coping well and in a way it is blissfuly simple. I go out and buy the food and walk to the shops and we watch television sometimes in the afternoon.

“We passed that compatibility test a long time ago so life in that sense is much simpler. We have always got on incredibly well, we work naturally together.”

As well as solving the mystery, John, never one to take himself too seriously, also had to try flower arranging, house cleaning 1920s-style and enjoying an absinthe-fuelled Charleston party.

One thing John is incredulous about is how he still gets stopped and asked about Strictly, even though it was 11 years ago. He left the show in his tenth week after a campaign to keep him in that he believes could have backfired.

“Instead of people shouting: ‘How are you John?’ they would be shouting ‘Why did you win’ or ‘You shouldn’t have won you swine’. I couldn’t have had that.

“People think that I was sacked or that I stormed off but I just bowed out graciously.

“The only alarming bit is that I am now treated as if I am elderly. It is a bit unnerving to be offered help with neighbours and all sorts of unlikely people coming to you.

“A woman in the supermarket said, ‘We are two metres apart and I can tell you a funny story about when I read your book’ and I thought, ‘My God, you don’t know me’.

“Presumably fans like that have always been around and they have never approached you before but now you have to stand two metres apart in the shop queue and you’re suddenly told that they’ve read your book.

“And it’s sort of alarming when you realise that you’ve been noticed for years but nobody has stopped you!”

To watch Celebrity Murder Mystery, go to My5