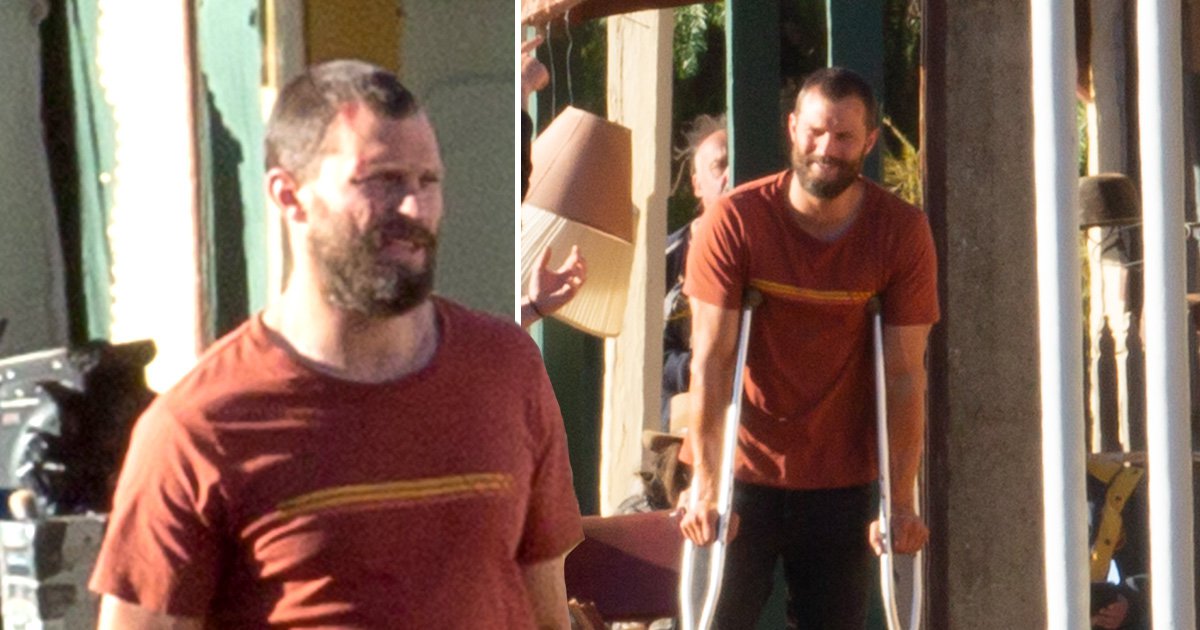 Jamie Dornan flashed a gruesome head injury as he continued filming for The Tourist in Australia.

Production on the upcoming Stan, HBO and BBC One series started earlier this year, and was moved to the outback in southern Australia.

The Fifty Shades of Grey star’s character looked to be struggling as he hobbled on crutches in front of the cameras.

He rocked an orange t-shirt and dark jeans for the shoot, coupled with tan boots.

At one point, a gash could be seen at the top of his head as he made his way into a rundown-looking diner.

We wonder where he got that from…

Gritty drama The Tourist follows the story of a confused Brit who finds himself stuck in the Outback, when he wakes up in hospital.

In an attempt to find out the truth about his identity – and why people are chasing him – he returns to the area to finally get some answers.

Jamie recently enthused about the role, explaining: ‘The Tourist are some of the most exciting scripts I’ve ever read.

‘I can’t wait to go to Australia with such a talented group of people.’

Speaking about the series, Hugo added: ‘I’m very excited to be slipping into the skin of one of the fabulously idiosyncratic characters who people the desert landscape of The Tourist.

‘The scripts are wonderful. Dark and shocking, surprising and hilarious and always very human.

‘This is a tonally uniquely project and should be an unforgettable ride and shoot for us all.’

A release date has yet to be announced, but we’re already living for it.

Related posts:
Google Has Laid Out Plans for Flexible Work Weeks for Its Employees
Meghan Markle should 'stick to what she's good at' jokes Stephen Mangan as he releases a rival children's book
Popular News
'Rick and Morty' Creator Says 'Vindicators' Spinoff Will Dive Into Team's Infamous Rick and Morty-Less Mission
18/06/2021
Stuart Broad builds up to second Virtual Test with Sri Lanka
26/03/2020
Bindi Irwin Made Last-Minute Changes to Her Wedding Due to Coronavirus Lockdown
26/03/2020
Widow on The Repair Shop leaves viewers sobbing
26/03/2020
Coronavirus lockdown: Global quarantine reveals weird fact about humanity
26/03/2020
Recent Posts
This website uses cookies to improve your user experience and to provide you with advertisements that are relevant to your interests. By continuing to browse the site you are agreeing to our use of cookies.Ok