Home » TV and Movies » From Fountains of Wayne to Soundtracks, Adam Schlesinger Was a Musical Alchemist

From Fountains of Wayne to Soundtracks, Adam Schlesinger Was a Musical Alchemist

When he needed to be, Adam Schlesinger was one of the most talented chameleons in the musical world. Whether as the lead singer of the band that would eventually achieve global notoriety or through his more translucent contributions to the soundtracks of beloved TV series and films, he had a knack for being able to deliver the precise feeling or atmosphere from whatever genre you could name.

It was how Schlesinger filled in those gaps with his own particular wit and care that made him not just an invaluable musician or songwriter, but an evocative storyteller. He died on Tuesday at the age of 52, leaving behind a legacy across TV, film, and music for which he was rarely the face, but so often the heart.

It’s telling that the numerous tributes that have poured out since the reveal of his COVID-19 diagnosis early this week and reports of his passing lead with different achievements. Chronologically, Schlesinger began the path to acclaim as part of Fountains of Wayne, which he formed with college friend and lead singer Chris Collingwood.

The band’s 2003 “Welcome Interstate Managers” birthed the enduring pop hit “Stacy’s Mom,” the song that would eventually propel Fountains of Wayne onto jukeboxes and a cappella arrangements and trivia answer sheets the world over. But take, instead,  “All Kinds of Time,” the song that pops up four tracks later on the album.

Simple and sparse, it’s a hazy ballad centered on a star football player reaching a state of unexpected calm late in a big game. Nested in this ode to poise under pressure comes a bridge that, on its surface, seems like a straightforward list.

Aside from the fact that the only football signifiers in the song are words “quarterback” and “snap” in the song’s opening lines, look at what Schlesinger’s able to do in the span of 25 seconds. There’s more than enough there in that single snapshot of a far-off living room to plot out your own version of this one guy’s entire life story. You could listen to this song for years and never really track that “bride-to-be” detail. There’s the success on the field (“The whole world is his tonight”), but even in the cosmic expanse that Collingwood’s airy and spacelike outro vocals suggest, this is still someone who can’t help but think of his impending marriage, too.

Schlesinger could throw in plenty more detail when he wanted to, drenching perky love songs with as much revealing assonance as he could muster. “Hey Julie” has the narrator “running ’round the office” for a “mean little man.” But it also showcases how Schlesinger could slide a bit of lyrical wordsmithing like “with a bad toupee and a soup-stained tie” into an upbeat ditty about finding refuge from corporate life in the one you love. 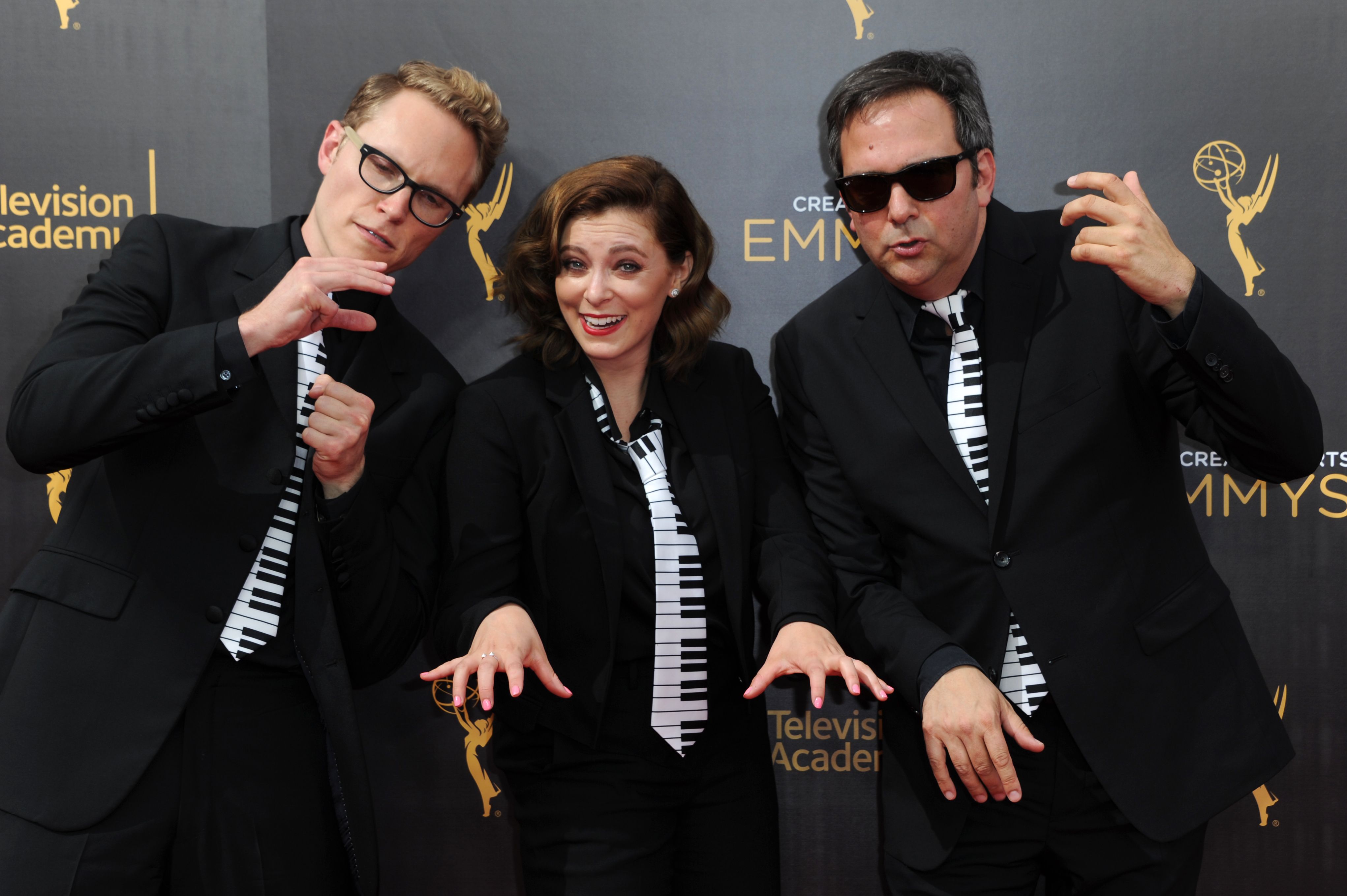 There are those who’ll hold the title track to the 1996 Tom Hanks movie “That Thing You Do!” as Schlesinger’s greatest feat. They’d be hard to argue with. The movie’s iconic snapping “I quit” scene or Tom Everett Scott bellowing “I am Spartacus!” or some of the coolest black sunglasses ever put on film would all be for naught without the generational earworm at its center.

There’s a reason that music-centered movies don’t rely on one song to carry it through: if you hear a song more than two or three times in the span of an hour, the shine wears off pretty quickly. But “That Thing You Do!” needs you to not only believe that radio listeners in and around northwest Pennsylvania would believe that this was one of the greatest, catchiest songs they’d ever heard, it needs you to pretty much agree with them. And it needs you to want to hear it again immediately right after that last chord.

That opening drum beat is a jolt to the soul, the guitar-strum hook ready to pull your body in any celebratory way you deem fit. It’s the kind of tune that will have your oldest aunt racing towards the dance floor at a wedding, your youngest nephew leaping around a living room with glee, and have you beating along on your car steering wheel as you’re gliding across an open highway.

And like the harmonies layered into each verse and on countless Fountains of Wayne choruses, there’s a mix of emotions. Some of Schlesinger’s best work existed in that misty area between two feelings: melancholy and hope, failure and happiness, love and exasperation. He transforms “That Thing You Do,” a song about unbearable jealousy and longing, into a song that sounds like the very embodiment of a sunny, cloudless Southern California afternoon.

That climate would eventually help form the basis of Schlesinger’s most significant TV contribution, the soundtrack of the CW gem “Crazy Ex-Girlfriend.” A vital piece in creating more songs for a series than most bands ever think of recording in their entire lifespan, Schlesinger became indispensable in writing and arranging songs that took the inner workings of Rebecca Bunch’s life and spread it out across decades’ worth of song styles.

He helped bring to life Disney-esque ballads and Ronettes-style breakthroughs and clarifying zoo excursions and Sinatra-tinged farewells and Broadway parodies. He helped form the joke foundation for tap dance innuendos and choruses of cat puppets. Along with Rachel Bloom and Jack Dolgen, Schlesinger was an indomitable part of a songwriting team that gave TV audiences a glimpse of what a TV musical could accomplish and the kind of talent it took to get there.

One of the joys of both watching and covering “Crazy Ex-Girlfriend” was seeing how generous that songwriting braintrust was to each other’s work. There wasn’t a fight over credit or one person meant to represent the whole. They were forthcoming with early versions of songs and behind-the-scenes peeks into how the show’s most memorable tunes journeyed to their final form.

On Wednesday, series co-creator Aline Brosh McKenna shared an early Schlesinger written-and-sung demo of the Season 1 song “What’ll It Be?”:

It’s a microcosm of that show at its best. Sure, it’s riffing on “Piano Man,” but the shift from “nine o’clock” to “5:53” in that first line isn’t just a sharper joke, it’s more specific. The fixation on tiny things like what the back of your hand looks like led to plenty of other great “CXG” lines in and out of song. And at its heart, it showcased how its characters worked through uncertainty in musical form.

It’s no surprise that a show with that range and dexterity had Schlesinger in its corner. Balancing the big and the small, he knew how to take something of-the-moment and connect it something timeless. It was far from his only trick, but he sure knew how to make a melody that would last far past the listening.

Pump Rules’ Raquel Leviss Opens Up About Unemployment After Fans Ask for Money
I Know You’re Stuck at Home, But Should You *Really* Be Smoking Weed RN?
Popular News
Dermatologist Explains How to Avoid Buttne, What Fashion Choices Can Cause It
30/11/2022
Stuart Broad builds up to second Virtual Test with Sri Lanka
26/03/2020
Bindi Irwin Made Last-Minute Changes to Her Wedding Due to Coronavirus Lockdown
26/03/2020
Widow on The Repair Shop leaves viewers sobbing
26/03/2020
Coronavirus lockdown: Global quarantine reveals weird fact about humanity
26/03/2020
Recent Posts