This month’s picks include a Latvian satire about World War II, a family portrait by an Indian documentarian, an Oedipal thriller from Mexico and more. 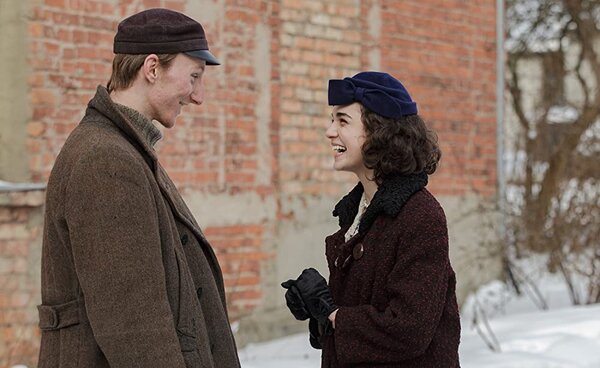 Stream it on Tubi.

Set during World War II, “The Sign Painter” tells a dark, real-life history with bracing irony and fairy-tale whimsy. Ansis, a sign painter in rural Latvia, lives through three regime changes in the span of a decade, each reflected in the hues he’s asked to color official buildings and signs with: green is favored by the dictatorship of Karlis Ulmanis, red by the Soviet occupation, and black by the Nazi invasion that follows.

Like the slightly canted angle that the director Viesturs Kairiss uses throughout the film, this playful conceit offers an off-kilter perspective on the past, emphasizing the tragic absurdity of human brutality. Ansis, played by Davis Suharevskis with an aura of wide-eyed purity, maintains a principled if diffident innocence throughout, while his two lady loves — the forthright Jewish comrade, Zisele (Brigita Cmuntova), and the sweet, sly Latvian Christian girl, Naiga (Agnese Cirule) — act as his strong-willed foils. The slapstick of the film’s first half, replete with painting accidents, petty jealousies and romantic high jinks, gives way to bloody scenes of war and displacement in the second, making for a gutting tonal seesaw that Kairiss executes with finesse.

Stream it on Mubi.

Archana Phadke’s intimate diary-doc opens with the filmmaker and her sister in a car, driving toward their house in South Bombay. Shiny skyscrapers loom on the horizon; their squat, worn building, home to their clan since 1902, marks a contrast, nestled within a crowded complex astir with chatter and dust. Old and new commingle in the Phadke house, where three generations of the family live in noisy, prickly coexistence. Archana observes their daily goings-on with a curious, slightly defiant eye; she loves her ancestral, history-laden home but balks at the traditions that continue to bind it.

As her relatives prepare for her brother’s wedding, she suffers frequent nagging about her own reluctance to marry; her wariness, she reveals, comes from the complicated, loving, yet often rancorous marital dynamic of her parents and her grandparents. Her film gently zeros in on the patriarchal trappings of her family but never flattens her loved ones into didactic archetypes; her patient, affectionate gaze captures them in all their complexity. With its portrait of the kind of middle-class, multigenerational abode that’s increasingly rare in growing cities like Mumbai, “About Love” feels like a microcosmic epic, an entire world captured in a grain of sand.

Stream it on the Media City Film Festival website.

Venture beyond your usual streaming hide-outs this month and sample some of the treasures in “ThousandSuns Cinema: Indigenous Edition,” a free online series hosted by the Media City Film Festival and copresented with Cousin, an artist-run collective supporting Indigenous filmmakers. The series rounds up an eclectic variety of films made by Indigenous artists from around the world. One recommendation from among its many gems: “Compañía,” by the German-born filmmaker Miguel Hilari, who is of Aymara descent. A trance-like visual odyssey driven more by rhythm and sound than by narrative, this mesmerizing documentary revolves around an Indigenous community in Bolivia whose members journey from the city to their ancestral village in the Andes Mountains to celebrate a festival honoring their dead.

Hilari weaves together evocative, fog-shrouded shots of the natural landscape and close, tactile scenes of the community’s everyday urban lives with snippets of interviews in which various individuals recount stories of death and migration — so that both kinds of departure become parallel, flecked by loss, grief, hope and more. Like several other films in the series, “Compañía” is as much a document of a community’s rituals as it is a kind of ritual in itself, a gesture of preservation and remembrance in the face of rapid change.

Stream it on Ovid.

But “Summer White” stalls the inevitable with some surprising twists: As it turns out, Fernando is friendly and kind, with a paternal tenderness that both touches and frustrates Rodrigo. The mother-son relationship recedes to the background, and Rodrigo and Fernando’s tense, shifting dynamic comes to the fore, made unpredictable by the erratic emotional currents of adolescent boyhood. Refusing easy lines of sympathy and black-and-white morals, “Summer White” turns a familiar narrative into an engrossing, unnerving tightrope walk of a film.

Stream it on Netflix.

The twists arrive a mile a minute in this lavishly directed, elaborately plotted thriller by the Spanish director Oriol Paulo. Set in the 1970s, the film knits together the tropes of many a detective mystery — a slippery femme fatale; a psychiatric hospital buzzing with secrets; a private detective with tricks up her sleeve — into a continually surprising narrative of fickle allegiances and blurry truths.

Things are not quite what they seem right from the beginning, when the elegant, dyed-blonde heiress Alice Gould (Bárbara Lennie) arrives at an asylum; she brings with her a doctor’s letter warning of her penchant for lying and accusing her of having tried to poison her husband. Alice claims the opposite — that her husband tried to kill her for her fortune — but soon suggests that her entire story might be a grand red herring; apparently, she’s a for-hire investigator who’s entered the institution to find the truth about a mysterious recent death.

The haunting camerawork, beguiling performances from an ensemble cast and endless cascade of revelations and flashbacks ensures, however, that nothing is certain. Is Alice caught up in her own delusional fantasies, or is she a victim of an elaborate gaslighting scheme? This is a pulpy affair that shocks and entertains, while also reckoning with the often draconian ways in which the state and medical establishments handle mental illness.