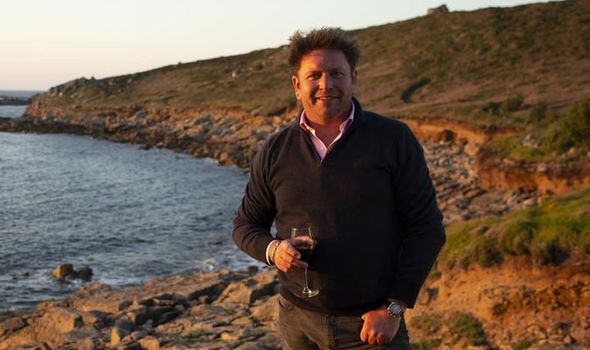 The straight-talking Yorkshireman, star of ITV’s Saturday Morning With James Martin, has a zero tolerance policy to customers who show any kind of disrespect to his staff. “I can’t tell you how many times I’ve thrown people out,” he growls. “If they are abusive to my staff, they won’t last two minutes. Absolutely.” Martin, 47, sounds almost paternal when he talks about his workforce and he smiles when he says that some of them come to him for advice: “When you become boss of a restaurant, you become agony aunt, HR, a bit of everything.

“They are a lovely bunch.” And he shatters any possibility of him being a tough, bluff Northerner, revealing that he frequently visits hospices on his travels around the UK.

“I do bits and pieces. Hospices do an incredible job. I just turn up and listen and chat to people. I don’t put my chef’s hat on. Raising money for charities is fine but giving time is more precious than any cheque. I get such wonderful letters from relatives.”

He saw more of the country than usual while filming his latest TV series, James Martin’s Islands To Highlands, which takes him to the far reaches of Britain exploring native cuisine.

“Some of the places we went to, I have never been before,” he says. “I get to cook and eat in all these very special places.

The Isles of Scilly were amazing, Shetland, and the east coast of Newcastle, and Wales. In the Cairngorms I ate the best piece of millionaire’s shortbread I have ever tasted. And Burgh Island on the South Coast. 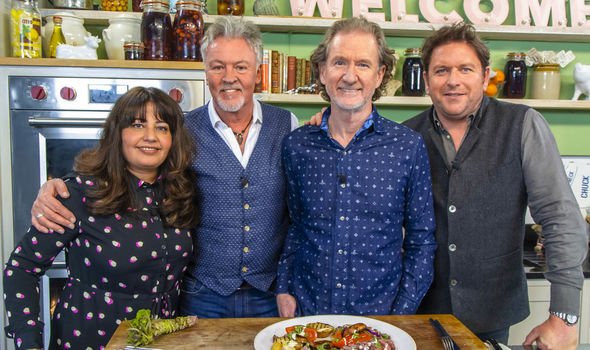 “I felt I was born with new eyes. I could do it all again. It makes you appreciate what is on your doorstep.”

Clearly he has loved every minute of being on the road, and in some cases, in the air. He tells how he has used his pilot’s licence to charter planes and fly to filming locations from Popham Airfield near his Hampshire mansion.

“I’ve been flying 15 years now,” he says. “Doing your first solo flight is like passing your driving test on steroids! I’ve got the bug and I love it.

“It’s the one time I switch off my phone.”

Ever the frugal Northerner, he says it can be quicker and cheaper than driving and says it helps him get back home to partner Louise Davies and their dogs Cooper and Ralph.

“I am happiest when I am at home, I am very much a homely person,” he says. 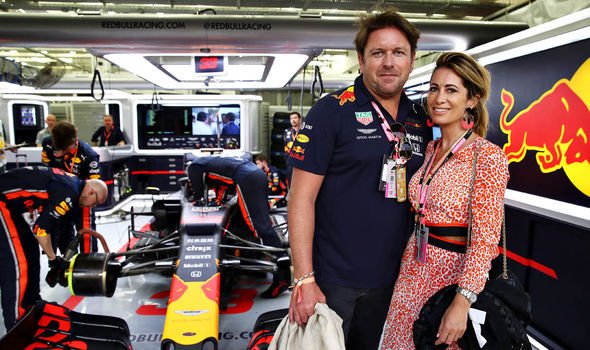 “That’s where I feel most comfortable and is a special place. We film the Saturday show here, it just works.”

Despite his idyllic home life, he’s said that there are no plans to marry and start a family.

“No, it doesn’t interest me in the slightest, mainly because I’ve catered for so many weddings, really,” he said last year. “I admire people who do it, that’s fine, but I’m quite happy. I don’t need to spend 60 grand on a day, no, I’m more than happy, thanks.”

Martin keeps his private life out of the spotlight following his much publicised four-year romance with Bond film producer Barbara Broccoli, which ended in 2005.

And any questions about glamorous PA Louise, whom he met on the set of Who Wants To Be A Millionaire? and who he has been with almost a decade, are strictly out of bounds. 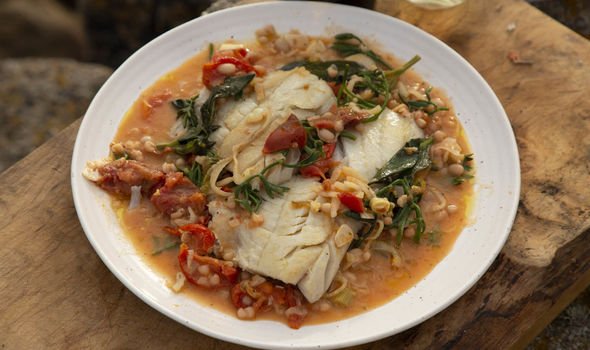 A man of contrasts, he clearly has a soft side for his loved ones.Although he is not close to his father (his parents are divorced), he talks about his mother Sue with deep affection: “She’s amazing and she is still working now at 72, I get my work ethic from her.

“I treat her as much as I can. Her roast beef and Yorkshire pudding would be my last meal on Earth.” And he was one of the first celebrity chefs to take to Instagram to make an emotional tribute to his friend and mentor, the Michelin starred French chef Michel Roux when he died, aged 78, two weeks ago.

But Martin is also a toughminded and astute businessman. He has two restaurants; James Martin Manchester and, in Hampshire, The Kitchen at Chewton Glen, and has survived in the fickle world of television for more than 25 years, hosting BBC’s Saturday Kitchen for 10 years before moving to ITV in 2017.

Born in Malton, North Yorkshire, his parents were farmers on the Castle Howard estate and he says he learnt the importance of working hard at a young age: “My parents said to me: ‘You’re getting nowt, because we’ve got nowt. 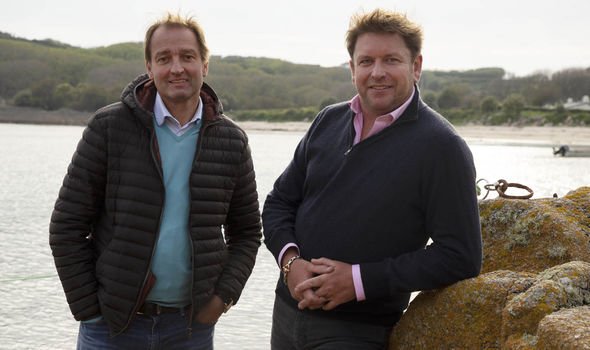 “There was no house I was going to inherit, no business. So I realised that if I wanted to get something, I had to go out and work for it.

Being appointed head chef at Hotel du Vin in Winchester when only 22 is still the highlight of his career.

He says: “I never went into this game for fame or to be on television. I went into it because I love food and cooking for people. I put a chef’s jacket on when I was only 12.”

Diagnosed as dyslexic at 32, he shrugs. “I graft. I always have. I work a seven-day week.

My agent has known me 30 years and I have never taken a day off sick. 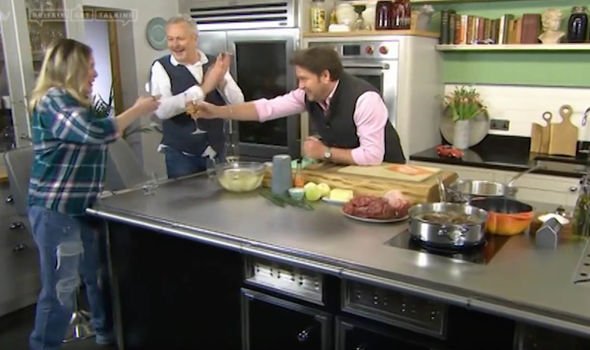 “He says he sets himself a goal each year and then treats himself. He spends his hardearned cash on his hobbies and interests, namely his car collection which includes a Chevrolet Corvette, a Lotus 340R, a 1948 Maserati and two retired Formula One cars.

Martin puts his lack of sick days down to his robust health but he doesn’t know what keeps him well.

He smiles: “I have a rider which is blue eye drops and Red Bull. And a Twix for lunch!

I don’t exercise even though I have a gym somewhere in my house. But I am never ill. I just enjoy food, drink, my mates.

“I have a health check every two years for my pilot’s licence. I don’t worry about getting older. Everything’s a bonus.

“I still haven’t got any grey hair – but the difference is now that when I wake up in the morning, the first thing I want to do is go to the loo.

“I used to wake up and want to go out! Just the other day I had to change the TV screen in my bedroom to a bigger one because I couldn’t see it!” Over the years, he has come into some flak for his fluctuating weight and been trolled on Twitter. 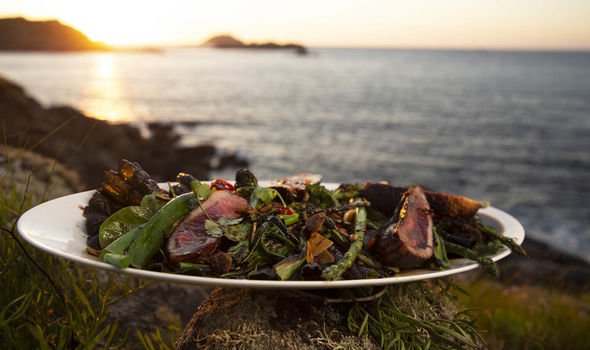 “You are what you are. It is one of the joys of my life that I am surrounded by food. I love it. I am testament to that!” He laughs. You sense that any criticism is water off a duck’s back. “I went into this game to cook, then I got spotted for television. I don’t care what people think. I never have. I am in make-up for exactly 30 seconds.

“I have tougher skin than you think. I’ve worked in kitchens, I worked on farms. What I care about is the people closest to me. I never get down. I am positive person and I just get on with it.”

He smiles: “My team are used to my northern ways now. And I’ve been living down south for the best part of 30 years and I think I have finally mellowed.”

HOT STUFF: James has been creating tempting dishes on TV for many years

Chelsea and Tottenham in transfer race for Nick Pope as Mourinho eyes Burnley keeper as Lloris replacement – The Sun
John Sergeant: ‘It’s my wife on the front line now… as a Samaritan’
Popular News
Back pain: Does your lower back hurt? Effective treatments for a herniated disk
05/07/2022
Stuart Broad builds up to second Virtual Test with Sri Lanka
26/03/2020
Bindi Irwin Made Last-Minute Changes to Her Wedding Due to Coronavirus Lockdown
26/03/2020
Widow on The Repair Shop leaves viewers sobbing
26/03/2020
Coronavirus lockdown: Global quarantine reveals weird fact about humanity
26/03/2020
Recent Posts