Home » TV and Movies » 90 Day Fiance: Angela brags about her orgasm, Michael insists he married for love and not a green card

90 Day Fiance: Angela brags about her orgasm, Michael insists he married for love and not a green card 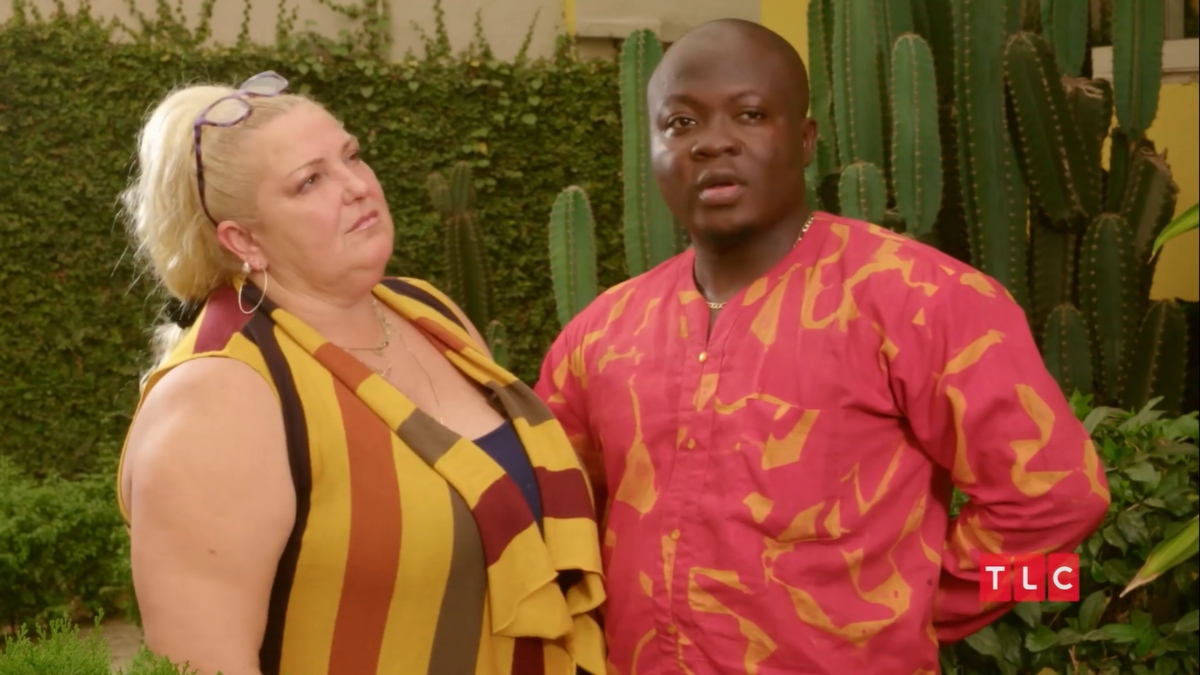 Angela Deem and Michael Ilesanmi finally had their Nigerian wedding on 90 Day Fiance; Happily Ever After? and it was an event for the ages.

However, it was the orgasm Angela had later that night that she was bragging about.

And when it comes to Michael, he’s still trying to convince Angela’s friend Jojo — and everyone else — that he married the Georgia native because he loves her and not because he has big dreams of coming to the U.S.

The latest 90 Day Fiance sneak peek begins with Angela and her friend Jojo packing things up in Jojo’s hotel room. Angela looks pretty elated as she tells her friend about the night before.

“Guess who got an orgasm last night?” Angela asked while plopping herself down on the bed.

And when Jojo looked up smiling and suggested it might be Michael, Angela quipped, “No, me!”

As she cackled, Angela continued, “First one since I’ve been here!”

The women continued to chat as they folded clothes. It was Jojo’s last day in Nigeria and in an effort to thank her for being at their wedding, Angela and Michael wanted to take her somewhere nice.

When asked about the wedding, Jojo said it was “really, really good” and then made sure to mention that the “music was good.”

As the group chatted about the trip to Nigeria, the conversation shifted a bit and Jojo started asking Michael questions.

It began after Michael said that they would be checking with a lawyer to see what they would have to do now in order to get Michael a spousal visa and finally get him to the U.S.

That’s when Jojo shared her concern. “I’m just worried that after two years of getting your green card, are you gonna stay with her?”

“Of course, yes! I will stay with her now,” Michael said while pointing out that they’ve been together for years now already.

Then, Jojo told Michael that she just wants to see them happy and even warned him that they need to stop arguing all of the time. It seems that she should have directed that last part at her friend because it’s Angela who is always blowing up at Michael and then proclaiming that she’s “done.”

It’s probably not the end of Angela and Michael’s disagreements and it would be foolish to expect them not to be over-the-top with her dramatics.

After all, we already know that Angela has no intention to “obey” Michael and she balked during the wedding when she was asked to repeat that part in her wedding vows.

But right now, both 90 Day Fiance stars seem to be in love and even though we all know that Michael entered into this in an effort to get out of Nigeria, he may just stick it out with Angela when he does finally get his visa and comes over to the U.S. like he has wanted to do.

Related posts:
Love All! Anna Kournikova's Daughter Mary Rocks Adorable Tennis Look: 'Wimbledon, Here I Come'
Trump fan ‘PULLS SHOTGUN on Black Lives Matter protesters' as dozens surround his home and call him 'racist'
Popular News
Where to Buy Selena Gomez's Rainbow Knives From 'Selena + Chef'
01/10/2020
Stuart Broad builds up to second Virtual Test with Sri Lanka
26/03/2020
Bindi Irwin Made Last-Minute Changes to Her Wedding Due to Coronavirus Lockdown
26/03/2020
Widow on The Repair Shop leaves viewers sobbing
26/03/2020
Coronavirus lockdown: Global quarantine reveals weird fact about humanity
26/03/2020
Recent Posts
This website uses cookies to improve your user experience and to provide you with advertisements that are relevant to your interests. By continuing to browse the site you are agreeing to our use of cookies.Ok