Home » Lifestyle » ‘You have to meet me halfway’: Ravaillion and Treloar content with netball comeback in Queensland

‘You have to meet me halfway’: Ravaillion and Treloar content with netball comeback in Queensland

Save articles for later

Add articles to your saved list and come back to them any time.

Kim Ravaillion had a few Super Netball clubs offer her a chance to play again after the birth of her baby Georgie, but given her premiership-winning history with the Queensland Firebirds she couldn't resist going back to the club that handed her a chance as a youngster.

Ravaillion – the 27-year-old Netball World Championship and Commonwealth Games gold medal winner with Australia, who is engaged to Collingwood AFL player Adam Treloar – said the decision to live away from her partner was difficult but planned for "a very long time".

"Obviously this decision didn’t come easily," Ravaillion told The Age. "I said to him [Adam] after taking a break from the national team that my career is not over. 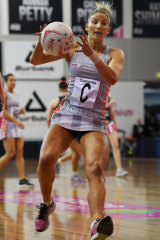 "I said ‘if I wanted to come back and play netball you have to meet me halfway’.

"And he basically said ‘whatever you want’, and he is super supportive with all my ambitions and I am so grateful to have him.

"He makes me feel super comfortable and excited for the journey ahead. Then Georgie came into the world and we kind of went with the flow."

Ravillion didn't know for sure if she would be able to come back to professional netball after giving birth to Georgie in March. She says she was lucky to train right up to giving birth, but waited about four weeks post birth before going on a proper run. 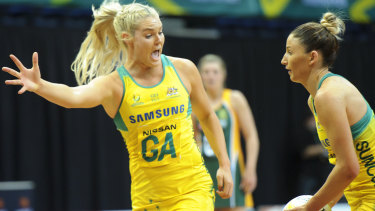 The first coronavirus lockdown then gave her plenty of time to train and test her body. This increased after spending over 100 days in Collingwood's Queensland hub, juggling training and caring for Georgie.

She was lucky too that Georgie's birth went smoothly, and then that Treloar was fully supportive of her desire to play for the Firebirds again.

It all meant she was ready to field offers for her return to netball after taking the 2020 season off, following three seasons at Collingwood.

"He understands, being an athlete," Ravaillion says. "We are both so young and we are not finished yet. We both agreed we are doing it for her [Georgie] and we don’t want to sit back and think ‘what if? What could have been?’

"We only have sporting careers for so long and it’s only the first part of your life. I don’t want it to end now.

"It would be so different if we were on the other side of the world from each other but it’s only interstate.

"So many people think it is such a big deal but Adam and I are so independent and we always knew it would be hard with our first child – Georgie is going to be well travelled – but we are so young and we want to enjoy this life as much as we can, doing what we love.

"And that’s what we want to encourage Georgie to do. That’s just the way we are."

The daughter of two extraordinary sportspeople, Georgie is already displaying signs of athleticism.

"She loves the Jolly Jumper. It’s like a 20-minute break for me. I just chuck her in it and she's fine." 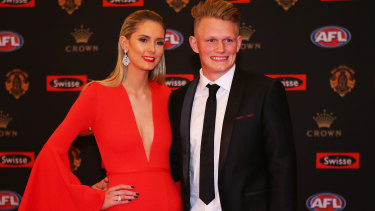 Adam Treloar and Kim Ravaillion at the 2016 Brownlow count.Credit:Pat Scala

Related posts:
140 migrants headed for Europe drowned off the coast of Senegal in the deadliest shipwreck of 2020, UN says
Where Are They Now? 15 Stars From The Girls Next Door
Popular News
Brits warned get your booster jab NOW for a normal Christmas amid fears 'nu' variant risks fresh restrictions
27/11/2021
Stuart Broad builds up to second Virtual Test with Sri Lanka
26/03/2020
Bindi Irwin Made Last-Minute Changes to Her Wedding Due to Coronavirus Lockdown
26/03/2020
Widow on The Repair Shop leaves viewers sobbing
26/03/2020
Coronavirus lockdown: Global quarantine reveals weird fact about humanity
26/03/2020
Recent Posts