Woman reveals she moved in with her EX during lock down

What it’s like to live with your EX during lockdown: Woman who moved in with her former partner for the sake of their son, 5, reveals her frustration at being ‘bad cop’ when it comes to discipline – and arguments over cooking and cleaning

A woman has revealed she moved back in with her ex during lock down for the sake of their five-year-old son – and joked she now has to put up with his habits all over again.

When the coronavirus pandemic hit, Emma Copeland, 38, from Bromley, who was with ex Tom South* – which is a false name – on and off for 15 years, was living in a tiny flat with their son, Luca.

However, despite her boss being incredibly supportive, she found trying to work full-time and juggling home schooling with Luca alone, with no garden, tricky – and so decided to move to the Kent countryside and in with Tom, who she split with 14 months ago.

‘It annoys me that he doesn’t wipe his hands when cooking and leaves food marks on the fridge door,’ she joked. ‘He doesn’t clean up his shaving hairs properly after a shave either.’ 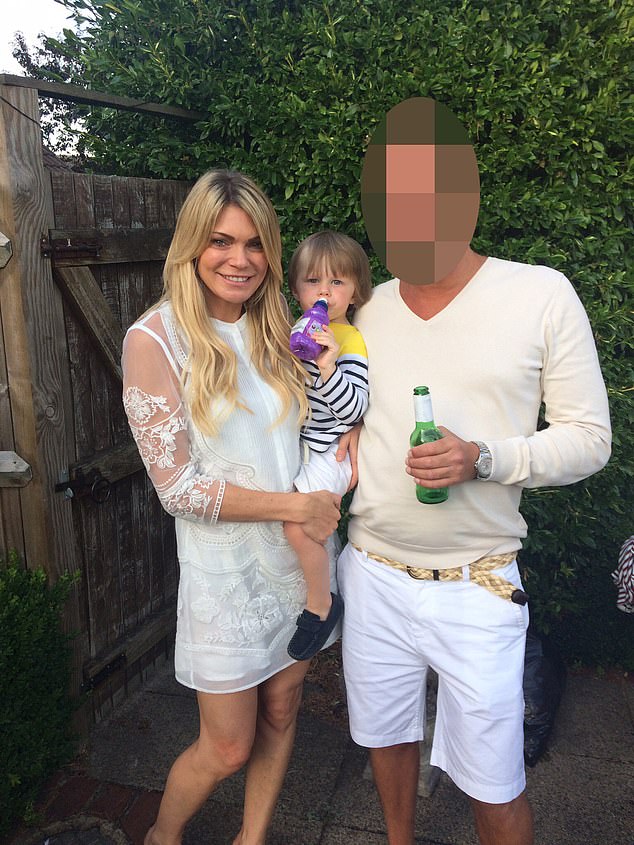 Emma Copeland, 38, from Bromley, and son Luca, five, moved back in with her ex and son’s father, Tom* during lock down. Pictured, together 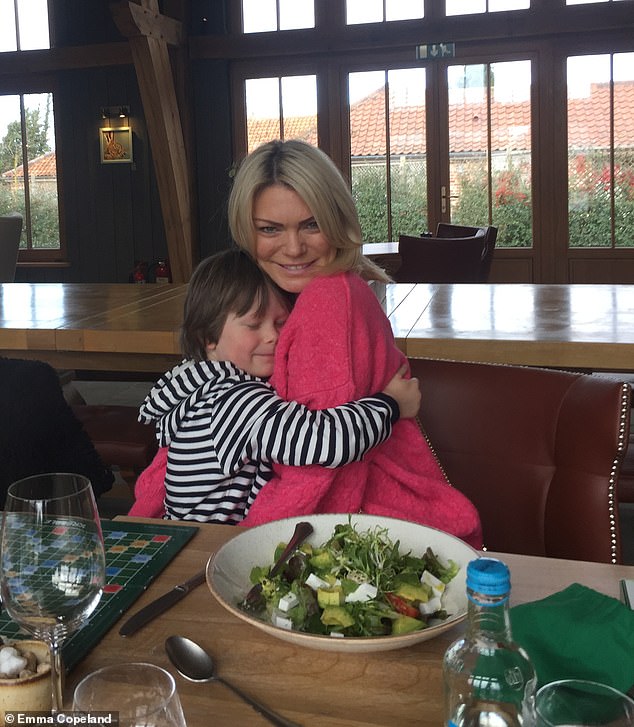 Emma was working full-time while trying to home school her five-year-old son when it came to lock down. Pictured, together

She added: ‘His pillows and duvets are a bit manky and aren’t as good quality as mine – probably because I took all the good ones when I left and left him with the rubbish ones!’

Emma and Tom met when she was 17-years-old, and she says the pair were best friends.

‘Sometimes being in a relationship with your best friend doesn’t always work,’ she explained. ‘Throughout the relationship we had a fantastic life, travelling, holidays and social life.’

‘I had a good job in PR and I was lucky enough never to have to really contribute to the household. It sounds perfect, but there were cracks like most relationships and we had our fair share of problems.

After 15 years on and off, the pair decided to move to the country and try for a child, which is when Luca came along.

‘I quit my job and became a full-time mum,’ said Emma. ‘It was awful! I had no money, I’d left all my friends behind and I was depressed. I felt like all I did was cook and clean the house and got no appreciation. I am sure a lot of mums can empathise with that.’ 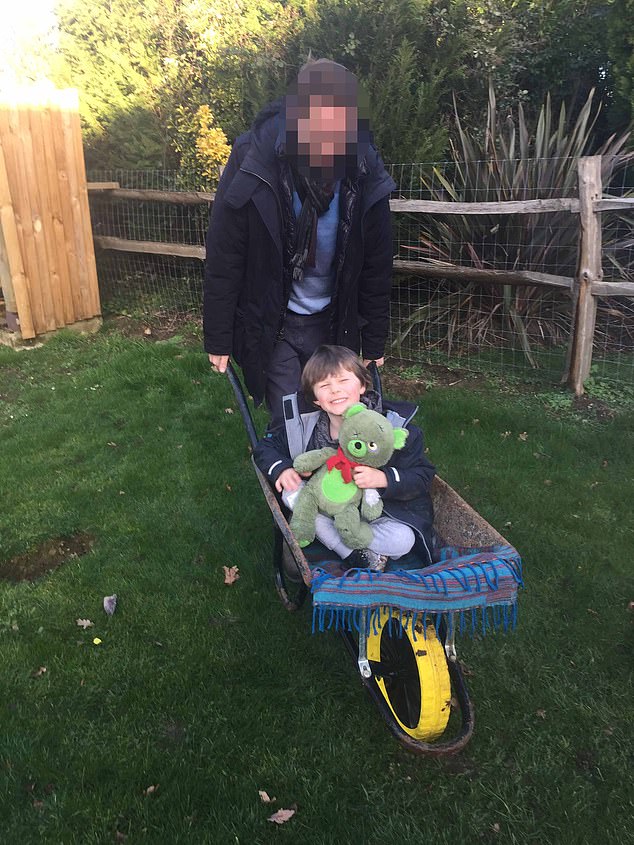 Emma and Tom (pictured with Luca) met when she was 17-years-old, and she says the pair were best friends. 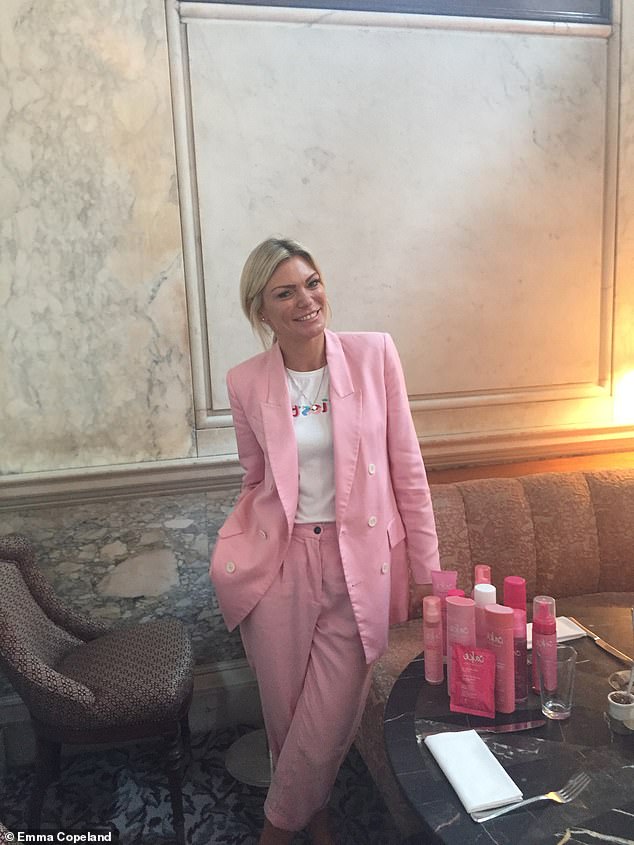 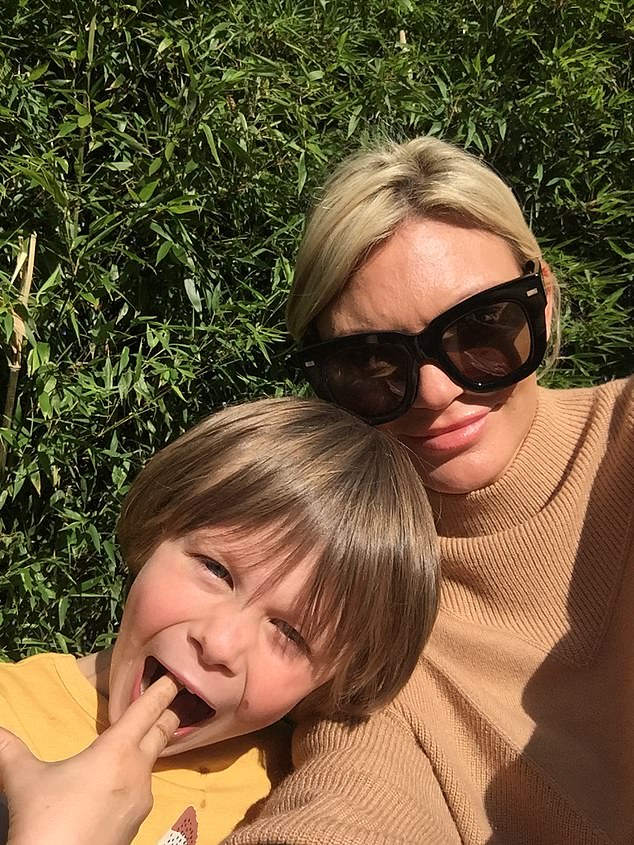 Emma decided it wasn’t fair on her son (pictured together) being cooped up with nowhere to run or play – so she decided to move in with her ex, Tom*

‘I cleaned houses part-time for my own money, which I resented him for because we didn’t need the extra money, but I wanted to earn my own.’

‘I stayed in the family home until our son was four, so he had a nice house with lots of toys, big garden and things to do. I wanted to leave so badly, but I had nowhere to go until last January 19, when I finally left.’

She continued: ‘We weren’t married so I wasn’t entitled to anything legally or financially, but because we had a child together, he gave us six months rent upfront to pay for a lovely cottage nearby. At this point we hated each other and couldn’t stand one another.’

Emma started looking for work in PR and within two weeks, she had found herself a job.

‘I started working at Catalyst PR in Bromley, which is a family-run leading hair and beauty agency,’ she said. ‘I couldn’t believe my luck when I got the job as I had had almost five years out from full-time work.

My boss Johnny Paterson is an incredibly kind, family man and took a chance on me because at the time it was obvious I had baggage and I still lived over an hour away. I had to do nursery runs so I was offered hours to suit being a single mum. I was over the moon!’

‘It felt amazing to get dressed for work and being around great people who are really positive was amazing. Knowing that you are doing something you love and actually getting paid for it felt good, too.’ 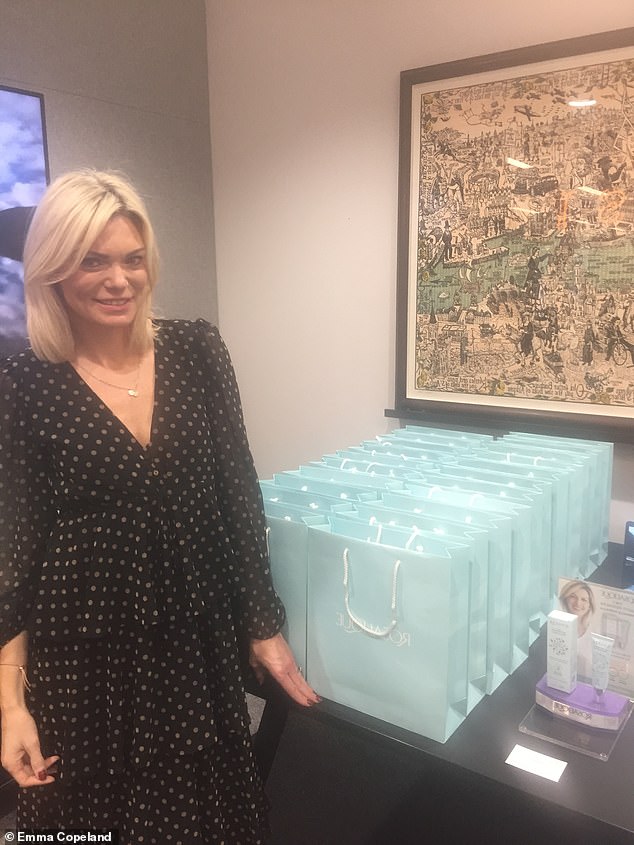 Emma says that her ex does have some annoying habits, which she is sure to make him aware of. Pictured, at work 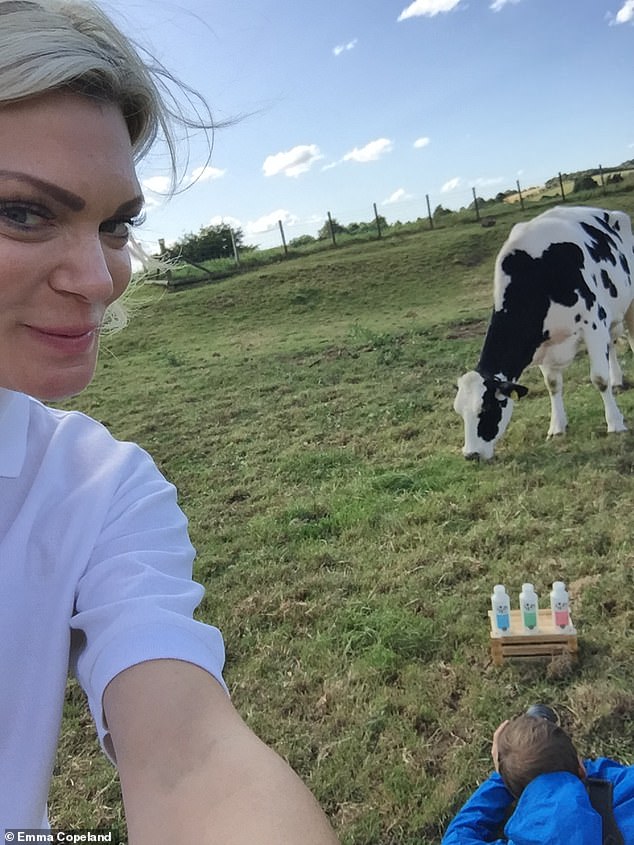 ‘I had spent the last five years working in a household and getting nothing. The team was young and vibrant and made me feel alive again. It was just a great environment to be in. After six months, Luca and I moved to be nearer my job.’

The mother-of-one says the last year has been the best of her life, and she hasn’t looked back – but then coronavirus hit.

‘We learnt that we would all be working from home,’ explained Emma. ‘I felt worried because I love being in the office. I love the people at work and don’t work so well on my own.’

‘Also, as a single working mum I also had to home school my son. We live in a small flat compared to the home we left, with no outside space.

‘After day one my boss, who also has two children, called up offering me further flexi-hours and additional support based on my situation, which was amazing. He obviously understood how I was feeling.

‘We self-isolated there for five days, but being alone and living in a small space was making me stressed. So after huge consideration, we decided to go back to our old family home and live with my ex during the lock down.

She continued: ‘The idea was on the cards from the beginning of self isolation, but I couldn’t actually imagine going back as we had so many bad times and bad memories there. 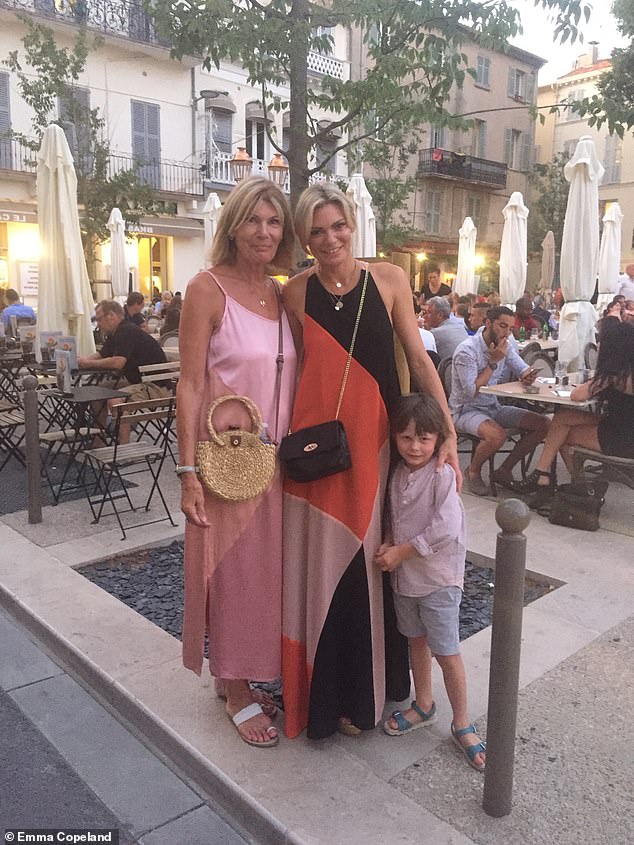 Pictured, with mum April, who took Emma and Luca to South of France last summer for her 60th birthday 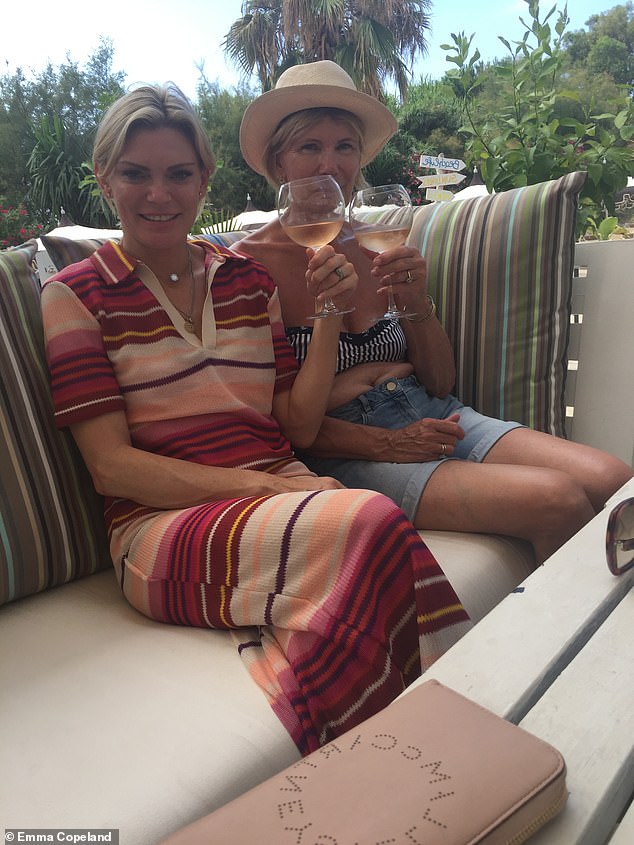 Emma says her relationship with Tom has been good for the last six months. Pictured, with her mum

Emma says that her relationship with Tom had been good for the last six months, and with him already self-isolating and working from home, the former couple decided it would be best to self-isolate together.

‘I have to say so far, it’s amazing because the house is big, nicer, with a lovely big garden with lots to do for Luca,’ she said. ‘I am able to crack on with work whilst Tom does sporting activities and Maths, and then I do reading and writing while he gets his work done.’

She added: ‘We are juggling everything together nicely and my boss Johnny understands that I may not be online during regular office hours, which is really comforting to know during this crisis.’

‘Tom has been really supportive of my work load, and has even been waiting on me – cooking dinner and a coffee for me every morning. Right now he is mopping the floor!’

However, Emma says that her ex does have some annoying habits, which she makes him aware of. 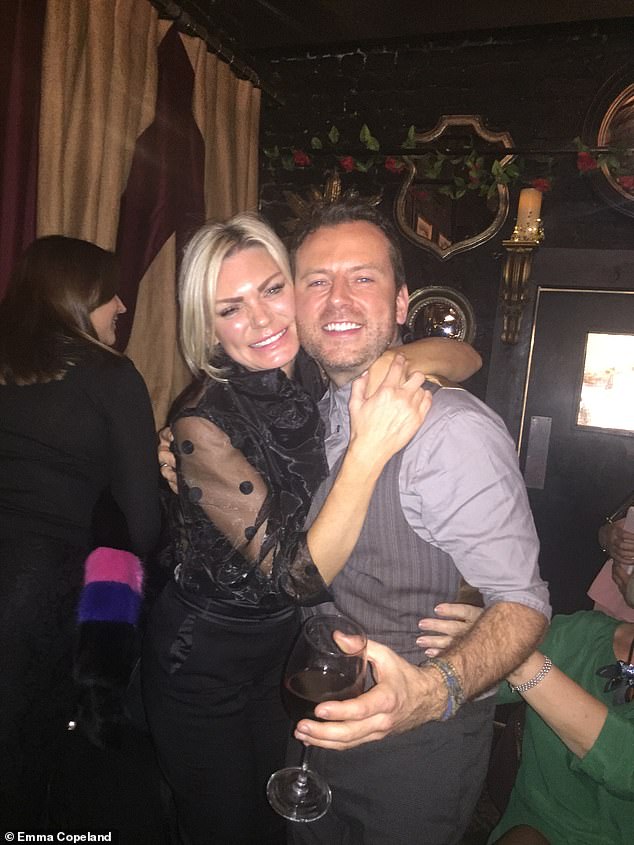 Emma has praised her boss Johnny for being understanding of her current living situation. Pictured, together

‘He doesn’t discipline our son how I like,’ she said. ‘He’s too nice and let’s him get away with too much. I’m way more strict. This was a big problem when we were together.’

‘I find it really annoying because it makes me the bad cop and him the good cop. We’ve had some words about it but he understands where I am coming from. Years ago it would have caused a massive argument.’

Emma went on to admit that Tom would probably say the most annoying thing about her is her big mouth and lack of interest when he’s talking to her.

‘Luca knows we both love him and that we are just living here together during coronavirus,’ she explained. ‘We asked him ages ago if he wanted to move back and he said no because he loves his school.’

‘On the whole it’s better and I’d have gone completely mad in the flat under lockdown, so it’s been a good decision albeit a weird one.

‘How long we’re here for I don’t know? I’m still paying my rent which is annoying! Ultimately, I did this for my son, but I feel like I made the right decision for everyone.’