Viewers of The Repair Shop were left in floods of tears last night after its master craftsmen restored a jukebox for a widow so he could once more hear the track he danced to with his late wife on their wedding day.

Geoff Clarke, from Sunderland, visited the Weald and Downland Living Museum in Singleton, West Sussex, where the show is filmed, to see if audio expert Mark Stuckey could bring his treasured music player back to life.

When he returned to the shop, Mark and furniture restorer Jay Blades watched as Geoff played Moonlight Serenade by Glenn Miller – the song he and his wife Marie, who died from a brain tumour nearly seven years ago, danced to at their reception.

Transported back to that special moment, Geoff broke down in tears – as did many viewers at home. 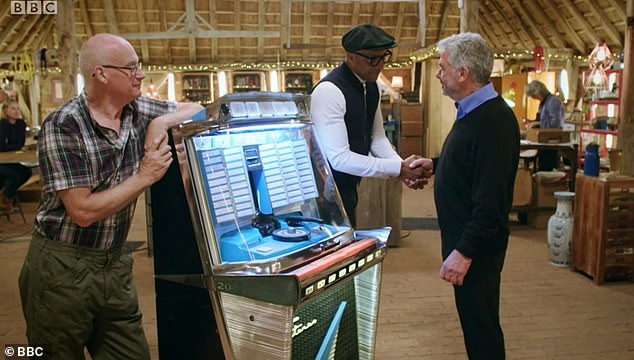 Geoff Clarke, from Sunderland, visited the Weald and Downland Living Museum in Singleton, West Sussex, where the show is filmed, to see if audio expert Mark Stuckey could bring back to life his treasured jukebox (pictured after its transformation) 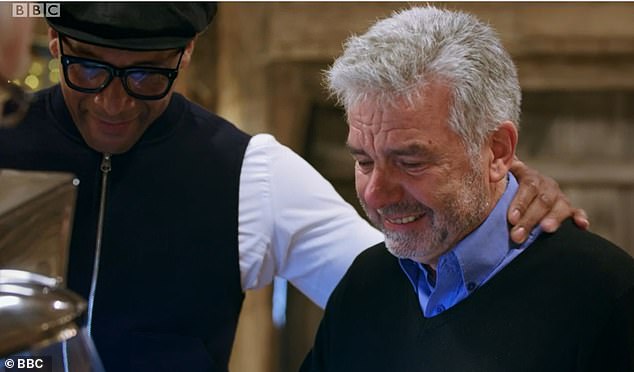 Transported back to that special moment with his late wife when the music played, Geoff broke down in tears – as did many viewers at home

Dozens took to Twitter, with many praising the BBC programme for its moving scenes – and one branding it a ‘soothing balm in troubled times’.

One tweeted: ‘Not a dry eye in the house – quite heartbreaking when the music played #therepairshop is such a wonderful programme.’

Another commented: ‘If you know, you know. But my sofa is now soaked in tears after boyishly sobbing at the latest #therepairshop. All I’m going to say is “jukebox”.’

And one wrote: ‘I’m not ashamed to admit I cried along with Geoff when the jukebox started playing again. #TheRepairShop.’

Geoff told how he bought the jukebox 43 years ago, and shortly after he met the ‘beautiful Marie’, whom he married in 1978. 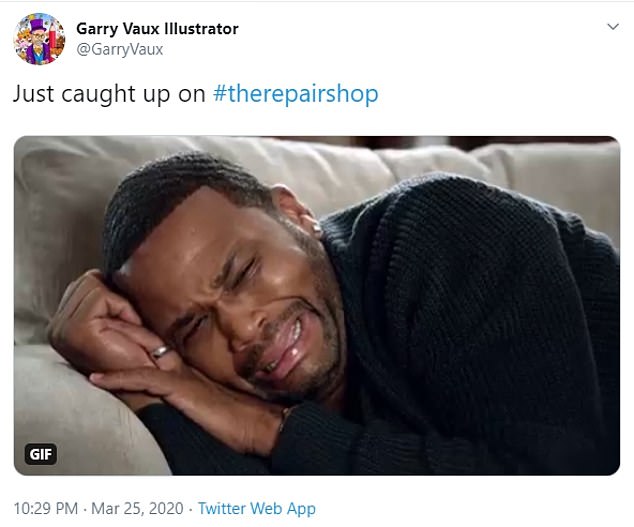 Dozens of viewers took to Twitter, with many praising the BBC programme for its moving scenes and one branding it a ‘soothing balm in troubled times’

‘I come from an era of rock and roll so it seemed like a good idea at the time,’ he said of his purchase.

‘I just thought that might be right for the moment, and I wasn’t quite expecting it, but absolute magic happened, as Marie and I cuddled and shuffled around, it was just, everything came together in that moment, Marie, and Moonlight Serenade. Everything is locked inside of there. 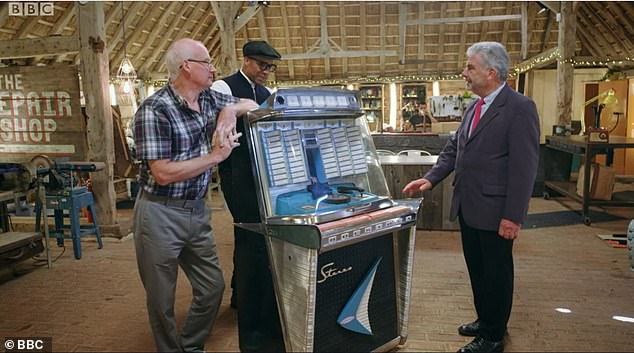 ‘Marie was one of those people that everybody loved, and I think her secret was that she loved everybody herself.’

Geoff said he couldn’t play the jukebox at first after Marie passed away because it was too painful, but with time he began playing it late at night.

‘I would sit at the bottom of the stairs and realise what I’d had all those years, and now I was lost forever,’ he said, welling up.

‘Then people would come to the house, they’d want to hear the duke box, the volume control started not to work properly, then if you selected one of these keys for your record, the jukebox would go click, the drum would roll round and it wouldn’t select a record.’ 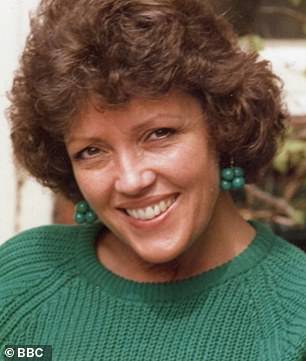 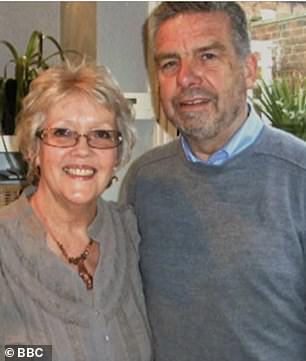 Geoff and Marie (pictured left and right together) married in 1978, but Marie passed away from a brain tumour nearly seven years ago

Asked by Jay what it would mean to him to bring it back, he replied: ‘It has the ability to take me back to that moment on our wedding day, and the magic of holding her, all just inside that machine.

‘She was such a very, very special lady, not just to me, to many, many people, and here is an opportunity to hear and see the memory of somebody extra special.’

Mark certainly had his work cut out, but the hours of labour he put in was certainly worth it, as when Geoff returned to see his retro jukebox back to working order, he was overcome with emotion.

On hearing Glenn Miller’s hauntingly beautiful track, he broke down in tears and was comforted by Jay. 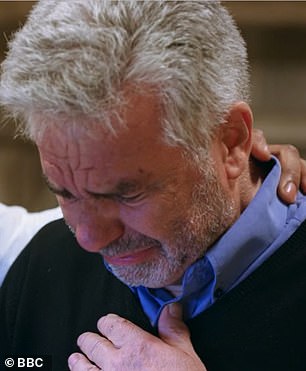 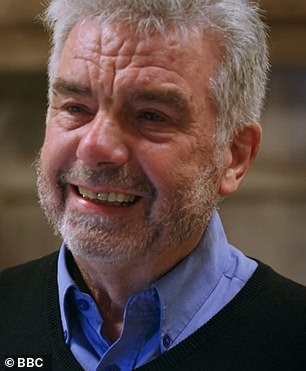 On hearing Glenn Miller’s hauntingly beautiful track, Geoff broke down in tears and was comforted by Jay 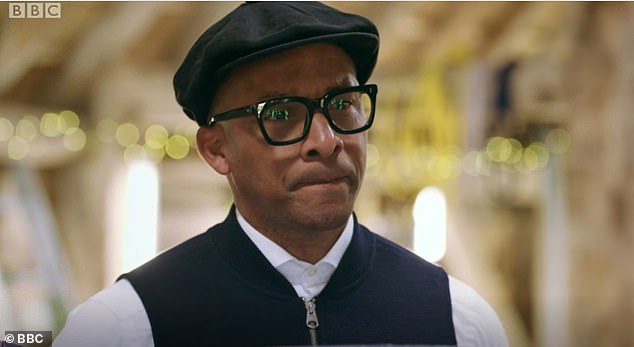 ‘It is a lovely tune,’ he said, to which Mark admitted: ‘I’m just glad that we could bring those memories to life for you.’

Geoff remarked: ‘That’s the amazing thing about music, it can instantly take you back to a special moment in time.’

Mark revealed it was a ‘big job’, but he knew they had to do it right to serve Marie’s memory.

As Geoff left the shop, Mark said: ‘We all felt that one.’

Viewers felt it too, branding the episode ‘touching’ and ‘full of emotion’. 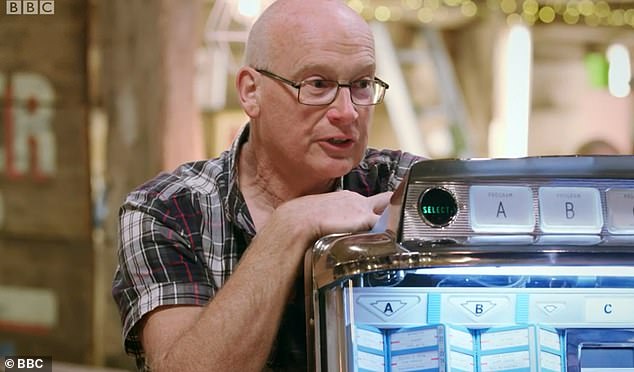 Mark (pictured) revealed the jukebox was a ‘big job’, but he knew they had to do it right to serve Marie’s memory 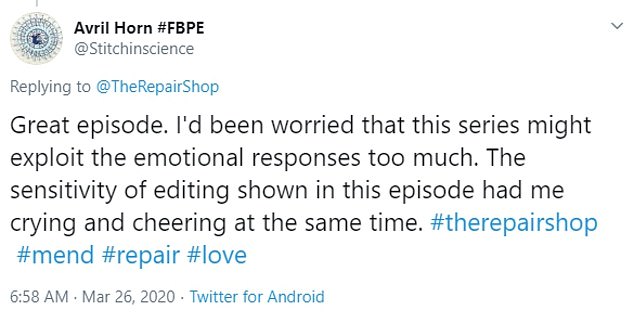 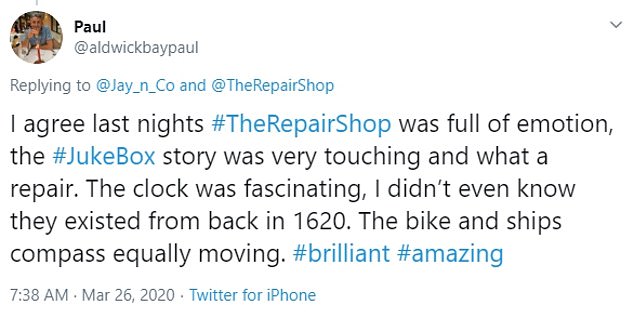 Viewers felt the emotion of the episode, branding the show ‘touching’ and ‘what the nation needs’

Geoff said hearing the jukebox play again instantly transported him back to that magical moment when he and Marie ‘danced and cuddled’ as newlyweds.

‘The duke box will be coming back home to its pride of place,’ he added.

‘I always liked music loud, so maybe the whole of the street will be hearing it, which will be a good thing. Celebrating Marie one more time.’

The Repair Shop airs on Wednesdays on BBC One at 8pm.