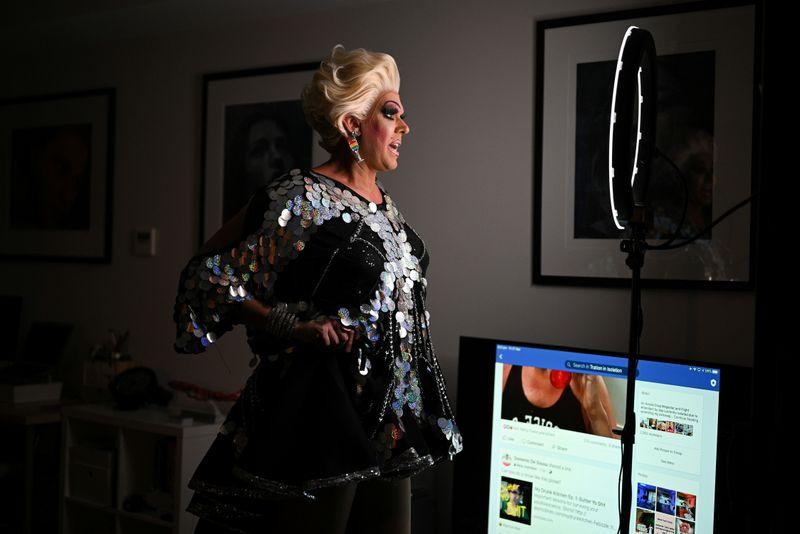 SYDNEY (Reuters) – An Australian drag queen has shifted her performances from stage to personal screens during coronavirus lockdown in Sydney to ensure she’s not all dressed up with nowhere to go.

Penny Tration – born Daniel Floyd – is a professional artist who has appeared on radio and TV shows. She has also entertained at shopping malls and corporate functions and, when not in drag, worked for an airline for 12 years that only recently let her go as the global virus outbreak grounded flights.

Like many fellow Australians, Tration is in 14 days of mandatory self-isolation as she was on an overseas holiday. That hasn’t stopped her from attracting a global audience by live streaming her show, “Tration in Isolation”, via Facebook every Friday and Saturday night

“I’m grounded because of the coronavirus. My airline has stopped all international flights from the 30th of this month (March),” Tration told Reuters via webcam.

“Now, with the airline not flying, we’re all on stand down. No pay. No prospect of when we will go back,” she said, adding that some viewers sent her donations at the end of the show.

During the largely unrehearsed show, Tration sings, dances and mixes herself cocktails while answering questions from viewers as they write in.

Even when isolation ends in a few days, Tration says she is not venturing outside anywhere too soon.

“I’m not going out until this virus is under control and I know that my actions can’t impact anyone else. I think, if other people knew this, when this was all kicking off, they would have done the same,” she said.

Spain’s Primavera Sound Festival Pushed Back to Late August Due to COVID-19 Pandemic
Slow broadband? You won’t be able to switch providers to speed up your Wi-Fi anytime soon
Popular News
Back pain: Does your lower back hurt? Effective treatments for a herniated disk
05/07/2022
Stuart Broad builds up to second Virtual Test with Sri Lanka
26/03/2020
Bindi Irwin Made Last-Minute Changes to Her Wedding Due to Coronavirus Lockdown
26/03/2020
Widow on The Repair Shop leaves viewers sobbing
26/03/2020
Coronavirus lockdown: Global quarantine reveals weird fact about humanity
26/03/2020
Recent Posts