West Coast Fever are chasing an elusive Super Netball titles and the Melbourne Vixens are hoping to reclaim the title of champions when they meet in the grand final on Sunday night.

The Fever have reached the finals in three of the past four seasons but fallen short each time, denying the club a single national league trophy in its 25-year history. 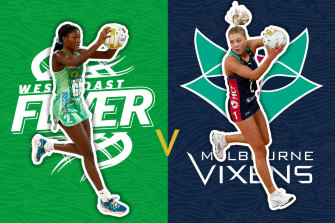 The Fever will host the Vixens in Perth in Sunday night’s grand final.Credit:Getty Images/The Age

On Sunday night, they’ll have home-court advantage at Perth Arena. The city was handed hosting rights before the finals series even began when Netball Australia sold off the grand final hosting rights to the highest bidder. That decision was slammed by the Australian Netball Players Association at the time. It said players were “devastated” by the call and about not being consulted.

But the Fever went on to win their major semi-final against Melbourne, making them the first club through to the grand final – which would have given them hosting rights under the old system anyway.

Chief executive Kelly Ryan defended the decision to sell the hosting rights to the grand final, made with just two rounds remaining in the home-and-away season. She said it was part of the of plan to ensure the sport is sustainable – Netball Australia revealed a $4.4 million loss for the last financial year.

“We understand the financial position we’re in and we have been very transparent about it,” Ryan said in a statement at the time.

“We are not on the brink of financial ruin.

“We know what is needed to protect the future of Netball Australia.”

Melbourne claimed the 2020 championship but surprisingly finished last on the ladder last season, then regained top spot with the club’s third minor premiership this year.

In the regular season, the Vixens beat the Fever in two matches before the tables were turned in the major semi-final, with the Fever claiming a 71-62 victory over Melbourne. The decider could go either way.

However, Australian netball legend Bianca Chatfield told news.com.au earlier in the week, “I do definitely think Fever are favourites”.

News, results and expert analysis from the weekend of sport sent every Monday. Sign up for our Sport newsletter.