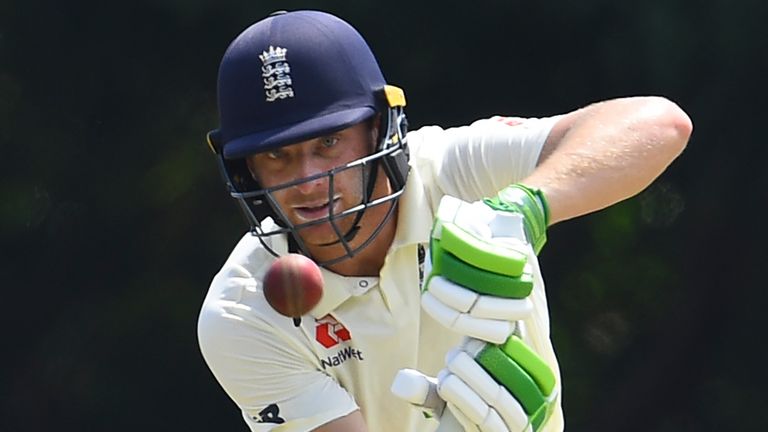 A determined batting effort enabled England to draw the second Virtual Test in Colombo and clinch a 1-0 series victory, closing out the final day of the series on 275-7.

It was tough going for the visitors as Sri Lanka stuck to their task, with the spinners bowling so often that England ended up facing a massive 107 overs in the day. However, an uncharacteristically defensive innings from Jos Buttler, who scored 48 from 157 balls, led England to safety. 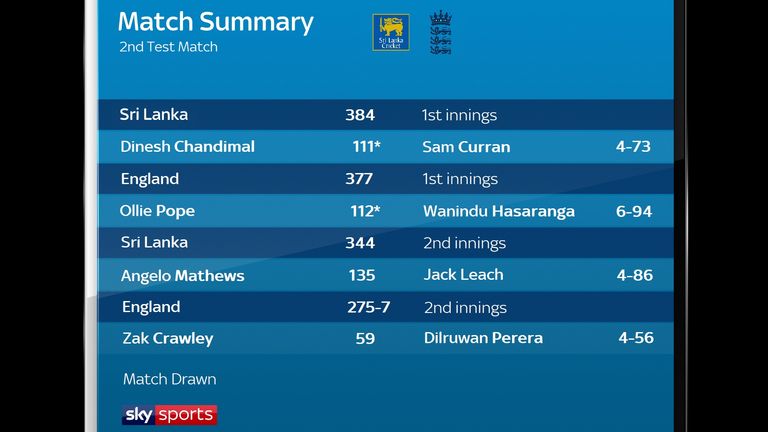 Sky Sports statistician Benedict Bermange is using a cricket simulation that takes into account batting averages, strike-rates, bowling averages and bowling speeds and plays out a five-day Test match based on those figures.

Faced with the daunting prospect of having to bat all day, England could not have hoped for a better start as Zak Crawley (59) and Dom Sibley (33) settled the nerves with an excellent opening partnership of 85, which took up most of the morning session.

The spinners were on as early as the eighth over and Crawley used his feet particularly well against the left-arm spin of Lasith Embuldeniya, striking him for two boundaries in an over. Sibley was more circumspect, at one stage blocking out 23 dot balls in a row and failing to score for more than half an hour.

It didn’t seem to bother him though, and so it came as somewhat of a surprise when Dilruwan Perera (4-56) found Sibley’s outside edge through to Angelo Mathews at slip 25 minutes before lunch.

Joe Denly (10), on the stroke of lunch, fell victim to one of the few deliveries to misbehave over the course of the Test when trapped lbw to Perera – a short of a length delivery scuttling along the ground, giving the umpire an easy decision.

It was just the boost Sri Lanka needed and, having completed an excellent fifty with two boundaries in the first over after the interval, Crawley fell for 59, caught by the captain Dimuth Karunaratne at bat-pad off Perera.

Joe Root and new batsman Ben Stokes were looking well-set to bat England to safety before a catastrophic mix-up caused Stokes (13) to be run out. Stokes played the ball to the right of backward point but hesitated before he saw his captain halfway down the pitch.

At tea on the final day of the Second Virtual Test England had reached 187-5 with first innings hero Ollie Pope and Jos Buttler at the crease. Crawley, Stokes – after a mix-up with his captain – and Root were the wickets to fall in the session. pic.twitter.com/9nTOTlciyu

Root (30) did not last much longer, edging a non-turning off-break from Perera to Niroshan Dickwella, and suddenly England were tottering on 162-5 with 40 minutes to go before tea.

However, Buttler – eschewing his normal attacking instincts – together with hundred hero from the first innings, Ollie Pope, took the tourists to tea without further alarm.

Pope (23) would depart 10 minutes into the final session, propping forward to Embuldeniya offering a straightforward catch to Oshada Fernando at silly point.

Well done lads never doubted you !! Surely @KumarSanga2 will have to consider his position ??

But Sam Curran strode to the crease and, taking inspiration from Buttler at the other end, he was also able to curb his natural aggression and Karunaratne was forced into trying his luck with the new ball with the score 221-6 with just over an hour to play.