Home » Lifestyle » UFC confirms Conor McGregor and Dustin Poirier’s fight is official, and the Irishman is already predicting a 1st round KO

UFC confirms Conor McGregor and Dustin Poirier’s fight is official, and the Irishman is already predicting a 1st round KO 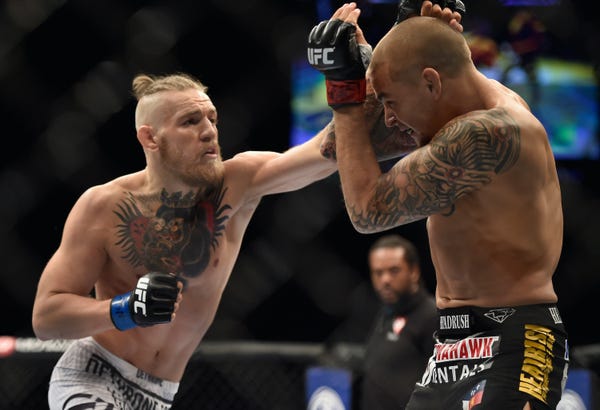 The UFC confirmed Conor McGregor and Dustin Poirier's fight is official, and the Irishman is already predicting a devastating first-round knockout victory.

McGregor had tweeted "lightweight division incoming" which suggested his Poirier match in January will take place in the 155-pound weight class.

The Irishman had wanted to fight this month or in December, preferring to campaign in the welterweight division at 170-pounds, however, the 32-year-old continually bowed to the UFC's ultimatums that his next fight should take place early in 2021 at lightweight.

His next fight is a rematch of his fourth UFC fight, a first-round knockout at UFC 178 in 2014 where he bludgeoned Poirier with a volley of punches.

Both McGregor and Poirier have improved in the six years since, gaining vital experience at the highest level of mixed martial arts competition, and having both moved on from the featherweight confines of 145-pounds.

Poirier lost to Khabib Nurmagomedov in Abu Dhabi in 2019, but has extraordinary victories over Justin Gaethje, Eddie Alvarez, Max Holloway, and Dan Hooker in his last five fights.

McGregor was once known as "Mystic Mac" because of his Muhammad Ali-esque ability to confidently predict how and when he would defeat his opponents.

And during an impromptu question and answer session with his Twitter followers Sunday, he said he will attempt to beat Poirier even faster than the 106 seconds it took him last time.

"I will aim to not only improve on the time I beat him in previously but the shot I slept him with also! Poirier is a hell of a fighter, but I'm McGregor," he said,

He added that he is committed to competing at lightweight throughout 2021 because there are "great matchups to be had" in that division.

"I will show the world once again who I am, and what I'm about," McGregor said, before declaring his intention to hold the lightweight and welterweight championship belts at the same time.

McGregor also fielded questions regarding other fighters in the UFC.

He referred to his long-time rival Nate Diaz as a "west-coast zombie," and said: "The trilogy will be of epic proportions when it goes down.

"Nathan, and his fighting styles, are never far from my thoughts throughout my own practices. When it happens, I'm ready."

The former two-weight UFC champion said he would consider a rematch with Max Holloway, whom he outpointed in Boston in 2013, and said the UFC's most underrated fighter is Tony Ferguson.

"It chops and changes daily however in this hollow forgetful business of recency."

He finished by hailing Nurmagomedov as "remarkable."

McGregor lost to a fourth-round submission to the Dagestan sambo specialist in 2018, but has since campaigned for a rematch.

He is seemingly targeting Poirier and accepting the bout at lightweight to try and force a rematch against Nurmagomedov, who announced an abrupt retirement from professional fighting after he slept Justin Gaethje last month.

"[Nurmgomedov is] a phenomenal grappler fighter. The current best in the sport with it," McGregor said.

McGregor, though, seemingly believes if they were to ever fight again, the result would be different. "I've the answer however and they know it."