The billion-dollar cleanup costs for a rusting offshore oil rig will be paid for by a levy across all Australian offshore petroleum companies, sparking industry anger at federal Resources Minister Keith Pitt.

Mr Pitt said the cost to the industry would be finalised after consultation, but last Thursday he proposed a tax on industry of 38 cents a barrel. It will apply from July 1 and be charged in arrears from July 2022. 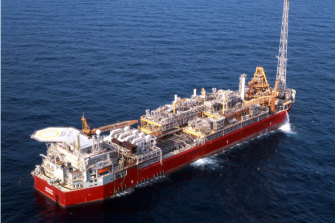 Resources Minister Keith Pitt will impose a levy on the oil and gas industry to recover the cost of decommissioning the Northern Endeavour offshore oil and gas rigCredit:Northern Oil and Gas Australia

The federal government was forced to take ownership of the Northern Endeavour production vessel, permanently moored 550 kilometres offshore from Darwin in the Timor Sea in 2019, due to safety concerns on the old, rusting floating platform.

Northern Oil and Gas Australia (NOGA) bought the vessel from gas giant Woodside in 2015 after 15 years of production.

NOGA collapsed in 2020 and ownership of the Northern Endeavour fell to the federal government, which means it is responsible for the complete removal of the large metal structure to prevent oil spills polluting the ocean, and safety risks to shipping. It also requires plugging surrounding wells in the ocean floor.

The government is running a commercial tender for the cleanup. While the total bill is yet to be determined, Mr Pitt has said taxpayers would not pay any costs. He also said the levy would cease when Northern Endeavour was decommissioned.

Green groups welcomed the new levy on industry and called on the government to make the levy permanent to clean up future oil rigs.

“The Northern Endeavour won’t be a one-off. With the release of the IEA (International Energy Agency) report saying it’s time to end fossil fuel exploration now and phase out its use rapidly, combined with the poorly funded decommissioning liabilities and failures in standard maintenance, there’s a string of ticking time bombs that will cost tens of billions of dollars to the taxpayer if these companies fold,” Ms Lerch said.

APPEA said any levy was a bad move but Mr Pitt’s proposed pricing was “over the top and extreme” and would be a “major disincentive for investment”.

Mr Pitt in 2020 invited the industry to suggest cost recovery models to prevent taxpayers from footing the bill for decommissioning. The government did not accept any of the industry’s proposals.

APPEA chief executive Andrew McConville said the levy would have “serious repercussions” to Australia’s economy as global investors weigh up jurisdictions to invest their capital in.

Mr McConville said the government should not be “washing its hands” of its current liabilities on Northern Endeavour and called on Mr Pitt to consider “alternative decommissioning and cost recovery measures”.

South Australian Senator Rex Patrick has led calls for tougher regulations on the industry, which he said had “pillaged Australian resources and provided little back in return” by way of company taxes.

”Industry always outplays government in relation to these things,” he said. “My natural tendency would be to have the company meet their obligations by way of a trust fund… but I don’t say an industry levy might not be a sensible alternative.”