The seduction of watching the ordinary lives of regular people

It’s 7am and we’re in Melissa Qiu’s bedroom. A preserved flower bouquet matches a pink-and-white bedspread. Qiu opens her blinds to a dazzling harbour view. Then it’s time for self-care in a palatial bathroom before a couple of hours of study, a liquid caffeine breakfast, then clinical training at the dental hospital, an 8pm dinner, and online lectures until midnight.

This is an ordinary day in Qiu’s life, a 21-year-old dental medicine student at the University of Sydney. She has a respectable 5000 followers on TikTok, but she is no celebrity. Yet this is a day that more than 250,000 people watched.

“Day in my life” vlogs, once popular in the glory days of YouTube, have had a recent resurgence on TikTok. On the app, the hashtags #dayinmylife and #dailyvlog have a combined 35 billion views.

Unlike on YouTube, where a typical vlog might demand 15 minutes, on TikTok it usually lasts under a minute, quickly chopping between key scenes of an average day: a vitamin C serum, a takeaway oat latte, new loafers, a train commute, a salmon bowl, a sweaty boxing class, a 3pm Nutella doughnut, an office lift outfit check followed by office banter, a buzzy restaurant, a purring cat, folding laundry, cooking stir-fry, a pink sunset. Sometimes there is a voice-over describing the day, other times it’s just set to music.

It made sense on YouTube: day-in-the-life vlogs typically offered an intimate glimpse of a high-profile influencer. So what is it that’s so appealing about seeing everyday people on TikTok share the mundane minutiae of day-to-day life?

Dr Sara Oscar, a visual culture researcher at the University of Technology Sydney, says there are a few factors at play. Vlogs satisfy an innate human curiosity about other people’s lives – “like watching neighbours through a window” – and the pandemic has helped create an obsession with daily living. Out of lockdown, life has once again become interesting.

Pair this with TikTok’s technology, where bite-sized videos appease our short attention spans by being easy to create and watch, life-logging has been hurled into the mainstream.

“It allows us to engage in social comparison, learn new things and deal with boredom,” Turel says. “It’s easier to engage with someone more on our level compared to someone who is a celebrity.”

Daily vlogs also often offer a hint of surprise – it could be as minor as a change in toothpaste flavour – and Turel says variability offers a hit of dopamine. 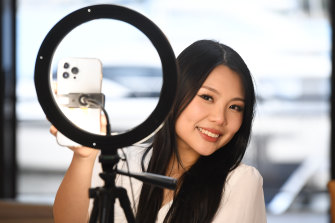 Melissa Qiu worried about sharing her life at first but she’s found that people enjoy learning about her study routine and dentistry. It also benefits her by motivating her to focus and work hard, and she appreciates her memories more than she used to.

Ginny Dougherty, a 27-year-old brand manager, has posted a vlog each day since November. Initially, she did it to keep family and friends in New Zealand up to date with her life in Sydney. Her first entry captured themes that continue today: the gym, reading in the sun, losing keys and the nail salon. She was shocked when she started to gain followers (she has now 8700).

She admits it’s “a weird phenomenon” to have strangers know how she spends every day but she enjoys vlogging and says the videos are quick to film, edit and narrate. “Will I be doing this in 10 years?” Dougherty asks. “I’m a creature of habit. For now, I’m so happy to do it daily. The moment I find other things in my life are slipping, I will stop.”

A sense of mindfulness can emerge from vlogging. The phrase “romanticise your life” has become popular on TikTok, encouraging people to see the beauty in small, even banal, moments.

Dougherty says she notices far more highlights in her day than she would have previously.

“It’s made me more grateful,” Dougherty says. “Coming out of lockdown, It’s just been so full noise. I’ve loved being able to reflect on it like a little diary.”

There is a paradox, Oscar says: “At the same time instead of slowing things down, TikTok actually speeds things up. You’re constantly being fed another video.” However, as long as recording doesn’t become obsessive, she thinks it’s wonderful to see people paying attention to things that generally go unnoticed. 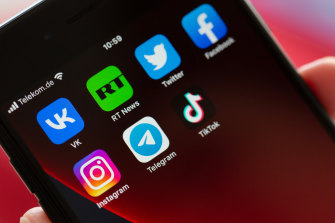 TikTok is one of the world’s most popular apps.Credit:Getty

Social media is in a state of flux, moving away from feeling hyper-polished and entering a “casual” phase. It’s why the Instagram “photo dump” has been huge. It involves people sharing recent glimpses of their life in a way that is seemingly random and raw – an out-of-focus photo at a wild birthday party, a couch selfie with a mate, a bulldog at the park.

Day-in-the-life vlogs are much the same: they are supposed to feel authentic. Of course, some will be more or less so than others.

Darcy O’Malley, a 27-year-old business analyst from Perth, has been posting a daily vlog each day since February.

“I was seeing Instagram Reels and TikToks of perfectly curated days, waking up at 5am, having a lemon water, going to the gym and while I really enjoyed looking at that, it’s not real life,” O’Malley says. “I found myself feeling jealous.”

Vlogging has become a hobby and while she’s yet to make money from it, she’s open to the idea – she just doesn’t want to lose her authenticity. “I don’t want to start going and doing things purely for the content,” O’Malley says. “I feel like I would lose a sense of myself and that’s not why I started this.”

Brands and celebrities (think Bella Hadid and Addison Rae) are also getting behind the trend. Melbourne-based Laura Henshaw, chief executive of health app Keep It Cleaner, started doing TikTok day-in-the-life vlogs late last year. She’s no stranger to these: she and co-founder Steph Claire Smith used to do them for YouTube about three years ago but she says they were time-consuming.

TikTok daily vlogs are easier to make, adding only about 30 minutes to her day, Henshaw says, and it helps her connect with her community by sharing what goes on behind the scenes in her work.

“It is my whole day but there’s still the caveat that [generally] it’s the best parts of the day.”

What’s excluded? Anything that could be unhelpful, she says, such as showing every meal.

Henshaw herself finds she loves watching vlogs. “Even people who I don’t follow – I just watch a minute of their day and I don’t know why,” she says. “I think getting an insight into anyone’s life is just interesting.”

Qiu says she won’t change the events of a chosen day just to make a more compelling vlog but she prefers to plot out the shots she’ll get.

“Although TikTok is less polished, there is still an element of planning that goes into it,” Qiu says.

Much like the photo dump on Instagram, it is somewhat inevitable that TikTok vlogs are deliberately curated, even when the idea is to be real, Oscar says.

“There’s a decision to point your camera at yourself eating croissant or to pan around your messy apartment or to show your skincare routine,” Oscar says.

Turel isn’t convinced that pure authenticity is possible on social media. On a subconscious level, people are always making choices to present themselves in a certain way, he says. Motivations can vary: it could be commercial, it could be a desire for more views, even wanting to appear authentic is a motivation in itself.

But he believes day-in-the-life vlogs are filling a void that reality TV created when viewers understood that their favourite shows were highly concocted.

“[Vlogs] are at least trying to or pretend to be authentic and realistic. At least there are no production companies behind them.”

Some criticise it as self-absorbed. Qiu has been on the receiving end of negative comments and says it can be hard. “Some people dislike the way you portray your life, think you share too much or idealise things.”

Women are more likely to vlog than men and Oscar questions some of the criticism.

“[Women have] been looked at in pictures, paintings and pornography throughout history, but when ‘she’ self-represents … she is labelled narcissistic. Are men seen as self-involved for [vlogging] or is it considered a symptom of masculinity? I’m not so sure.”

TikTok is a platform that has invited normal people to “be the main character”. And as Ginny Dougherty says: “At the end of the day, everyone is at the centre of their own universe.”

TikTok – let’s talk about it

Make the most of your health, relationships, fitness and nutrition with our Live Well newsletter. Get it in your inbox every Monday.

Most Viewed in Lifestyle