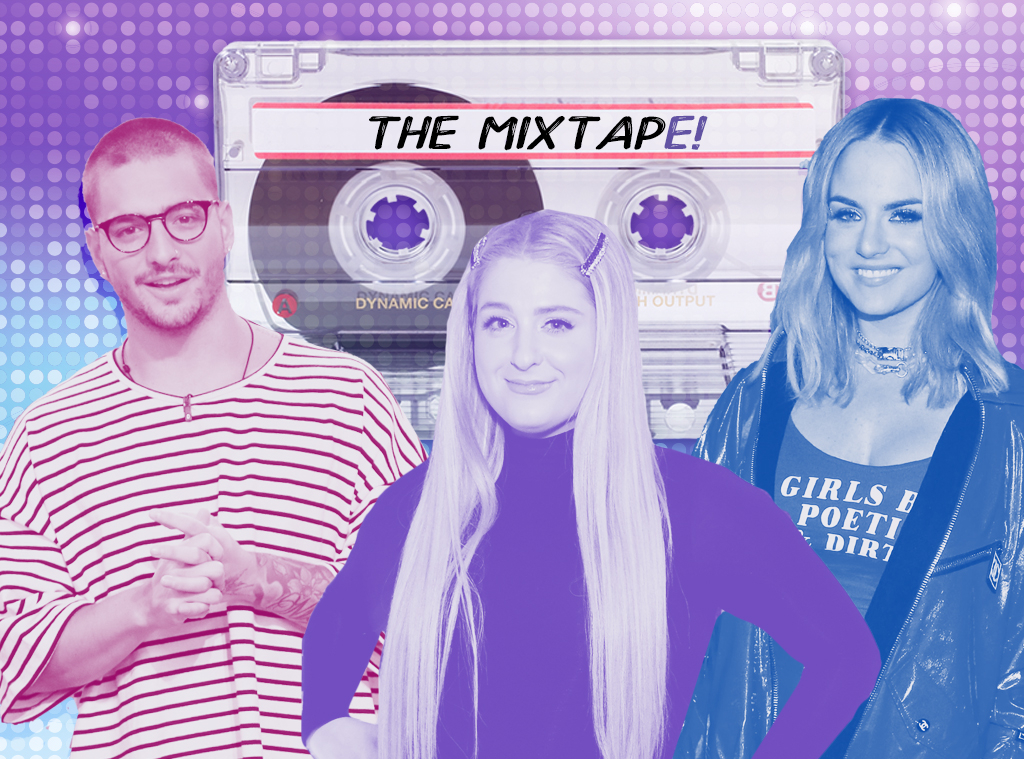 Music matters more than ever.

As we find ourselves in this new normal of extreme social distancing amid the quest to slow the spread of COVID-19, otherwise known as coronavirus, both here in the United States and nearly everywhere else across the globe, with no real, concrete end in sight, the power music has to change our mood, boost our serotonin levels, and gives us a sense of connection to the world at large can’t be overstated or overlooked. Don’t believe us? Pop your favorite song on and bop around to it wherever you are. You’ll see what we mean.

With that in mind, we here at The MixtapE! have been committed to bringing you the best releases each week in the hopes of brightening your day just a little bit. But we got to thinking about what songs our faves from the music industry are turning to in their time of need. So, we reached out to them and asked stars like Meghan Trainor, Maluma, JoJo, Chris Lane and more to share their social distancing playlists. Hopefully you’ll find some new tracks here (or rediscover old faves) that’ll help lighten your load and pass the time.

The “No Excuses” singer, who released her third studio album Treat Myself in January, recommends:

1. “Nice To Meet Ya” by Meghan Trainor feat. Nicki Minaj: “THIS IS AN ANTHEM I GOT TO WRITE WITH THE QUEEN HERSELF, NICKI MINAJ! IT MAKES ME FEEL SO EMPOWERED”

3. “Play Too Much” by Kyle Dion feat. DUCKWRTH & UMI : “I’M VERY IMPRESSED BY THE LYRICS IN THIS SONG. IT’S SUPER CATCHY AND CLEVER AND MAKES ME SMILE EVERY TIME I DANCE TO IT”

4. “July” by Noah Cyrus: “THIS SONG BROKE MY HEART IN THE BEST WAY, I’M A HUGE FAN OF NOAH AND LOVE HER VULNERABLE SONGWRITING AND HER BEAUTIFUL VOICE “

5. “Like A Movie” by Labrinth: “ONLY THE GENIUS THAT IS LABRINTH COULD’VE WRITTEN AND PRODUCED SUCH A BANGER OF A TUNE. SO CLEVER, SO UNIQUE, AND SO GOOD!”

The Colombian heartthrob, who released his last album 11:11 back in May, recommends:

1. “Que Chimba” by Maluma: “I just released this ‘cumbia villera’ track that is very traditional among the youth in Colombia. It’s like traditional cumbia meets EDM, and it makes you feel like you are full of life during the times that we are currently facing globally. I hope this song brings joy and light to my fans looking for good energy to uplift themselves.”

2. “You Rock My World” by Michael Jackson: “I love MJ. He is my idol and you can’t go wrong with such a global classic.”

3. “Joro” by Wizkid: “This song is an upbeat ballad and I am so inspired by Afro beat music.”

4. “Djadja” by Aya Nakamura: “This has been my favorite song since this past summer. It’s been the perfect setting the mood right track and just truly makes me want to dance.”

5. “Always on Time” by Ja Rule feat. Ashanti: “For many that don’t know, I have been a Ja Rule fan since I was young.  I love a good throwback that reminds me of some good youthful times when I was young in Medellin, Colombia.”

The soulful songstress, who recently reworked her classic track “Leave (Get Out)” into an anthem for these strange times and will release her next studio album, Good to Know, in May, recommends:

2. “Shake The Room” by Pop Smoke feat Quavo: “Gone way too soon! Pop had one of the most exciting voices in hip hop.”

3. “Breathe Deeper” by Tame Impala: “This whole album feels like a dream sequence. Put it on and cruise out (in your mind).”

4. “Man” by JoJo: “My anthem. A bop that will worm its way into your brain until you can’t stop singing it.”

6. “Link Up” by Tinashe: “Makes me feel like the baddest woman alive.”

While the country singer and his Bachelor Nation bride made their playlist together, commentary comes to you courtesy of Chris.

1. “Whole Heart (Hold Me Now)” by Hillsong UNITED: “For us, in such a crazy time, we lean on our faith more than ever.”

2. “Just To See You Smile” by Tim McGraw: “This song has a whole new meaning now… because I’ve been doing some pretty weird things to make my baby smile during this crazy time! Haha!”

3. “Out Of The Woods” by Taylor Swift: “Can’t wait until we’re out of the woods and back to normal life!”

4. “Big, Big Plans” by Chris Lane: “Everyone has a lot of downtime right now. Plenty of time to talk and make some Big, Big Plans for the future!”

5. “Summertime” by Kenny Chesney: “This song has me longing for the summer, in hopes that we have gotten through all of this. I’m imagining summer concerts, toes in the sand, and a Mango Cart in my hand!”

1. “The Other Side” by Justin Timberlake & SZA

“These songs are a smooth disco vibe. Meant to give u a little groove while bored at home,” he told us. “These songs all make me feel good!”

The “Not 20 Anymore” singer recommends:

1. “Titanium” by David Guetta & Sia: “This song makes me feel so powerful, like I can get through anything!!!”

2. “Don’t Stop Believin'” by Journey: “Anytime this song comes on, no matter where I am it lifts my mood. This song also brings everyone together. We really need that right now. “

3. “Keep Your Head Up” by Andy Grammer: “This song just makes me feel happy. It makes me feel like everything is gonna be okay especially in these tough times.”

4. “The Climb” by Miley Cyrus: “This song reminds me that life is about trials and tribulations and that it’s about the journey.  We will all get through!”

5. “Imagine” by John Lennon: “This song gives me hope that one day we will all come together in peace and happiness.”

2. “Aquarius (Let The Sunshine In)” from Hair the musical

3. “A Whole New World” by Matthew Morrison: “Off of my album which is a fun one. Gotta do one from the album.”

The Japanese-born “Run” singer, who became the first Asian-born artist to debut at No. 1 on the U.S. Billboard R&B/Hip-Hop Albums chart with his debut LP BALLADS 1 in 2018, recommends:

2. “Yah Mean” by Playboy Carti: “I mean, why not have a good time indoors? I feel like I’m still getting sunlight from this song.”

3. “Move Bitch” by Ludacris feat. Mystikal and I-20: “We definitely don’t want to be touching each other right now.”

4. “Antidote” by Travis Scott: “We need that antidote ASAP!!”

5. “Two 16s” by Z Money feat. Valee: “This song always brings my blood pressure down to dangerously low levels. Best song to play when you’re not trying to do anything at all, which is fitting right now.”

Watch NBC News Special Report: Coronavirus Pandemic Tuesdays at 10 p.m. ET/7 p.m. PT on NBC, MSNBC and NBC News NOW. For the latest updates on the coronavirus pandemic and for tips on how to prevent the spread of COVID-19, please visit The Center for Disease Control and Prevention at https://www.cdc.gov.