Could it be more than a day or two before all the best dinner parties in the loftier postcodes feature iceberg lettuce on a silver platter where once was displayed a bowl of beluga caviar?

In-house chefs will surely be instructed, urgently, on the return of the prawn cocktail as the society entrée du jour, the prawns nestled oh so gently on a bed of crisp and giddily extortionate iceberg. 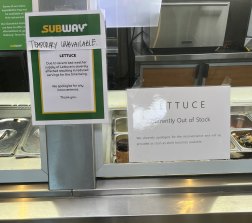 A Subway store informs patrons that it has no lettuce.

Kids will be reduced to sighing with envy as young Master Ritchie Rich withdraws from his lunchbox a sandwich of egg and – oh, my – lettuce!

Imagine the swagger required by a hipster to order a vegetarian burger with the lot … and extra lettuce.

Former Nationals leader Barnaby Joyce’s threatened $100 Sunday roast – the result, he predicted in the dark days of 2012, of a carbon tax – may never be realised.

But the $10 iceberg lettuce has snuck up on us all.

Who will be the first to inform Nationals senator Matt Canavan, champion of coal, that the iceberg lettuce market is leaving mining stocks in its dust?

At the time of writing, just 24 lettuces were worth a tonne of the black stuff dug out of Australia. Truly.

Why, KFC, the cuisine of the nation’s tradies, has been forced to add cabbage to its burgers, causing an intervention on Thursday by Prime Minister Anthony Albanese.

“This is a crisis,” he declared on morning radio, chuckling.

“I’ll put it on the list for the cabinet meeting today. Cabbage-gate.”

It clean blindsided the Reserve Bank, too.

As it dithered about taking action to slow the march of inflation, the bank seemed unaware that the formerly humble iceberg was lurking, waiting to put a nasty gash in the hull of what had been celebrated by the previous prime minister as the Titanic of economies.

Comparisons with the great Dutch tulip bulb market bubble of the 1600s cannot be far away. We barely dare think of the pain should there be an iceberg crash of such proportions as tulip mania.

The iceberg, however, doesn’t have the – shall we say – aesthetic attraction of a rare tulip.

This may yet prove to be salvation for the whole flipped-out dizziness.

The $10 iceberg seems unlikely to remain a brisk seller, whatever the best dinner party hosts might decide.

Slow-selling icebergs tend to grow less desirable by the day. The hearts of the poor little things grow soggy. The leaves wilt.

Allow us to predict that faced with such a prospect, hard-pressed shoppers are about to deliver a comeback to alternative varieties of salad ingredients. Wild weed, foraged from the nature strip, is beginning to sound appetising.

Cut through the noise of federal politics with news, views and expert analysis from Jacqueline Maley. Subscribers can sign up to our weekly Inside Politics newsletter here.

Inside Job Renewed For Season 2 By Netflix
I'm a cleaning pro and you should NEVER use a sponge to do your washing up – here's what to use instead | The Sun
Popular News
Eckhaus Latta’s Zoe Clog Appears in Pink
06/07/2022
Stuart Broad builds up to second Virtual Test with Sri Lanka
26/03/2020
Bindi Irwin Made Last-Minute Changes to Her Wedding Due to Coronavirus Lockdown
26/03/2020
Widow on The Repair Shop leaves viewers sobbing
26/03/2020
Coronavirus lockdown: Global quarantine reveals weird fact about humanity
26/03/2020
Recent Posts