You could be forgiven for thinking some of Australia’s society figures had fallen on hard times, based on their Instagram accounts. 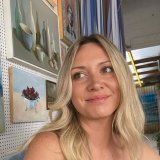 Hillsong heiress Laura Toggs is selling her clothes on Depop.Credit:Instagram

The daughter of Hillsong founder Brian Houston has fast become a social media influencer giving her legion of followers a peek into her life as a Christian preacher and glamorous mum of three – not to mention the owner a very enviable designer wardrobe.

Laura Toggs (nee Houston), a pastor for Hillsong’s ‘youth ministry’ alongside her husband, Peter, is now offering up some of her pre-loved pieces for sale, which she promoted on her Instagram account last week.

Toggs, 35, listed a ‘benny’ shirt by Australian brand Blanca studio on Depop, an online marketplace platform designed to allow people to sell clothes and other items remotely. But if you want to own the wardrobe of the Sydney socialite, you’re going to need a fat wallet.

Laser Clinics Australia co-founder and former Rich Lister Kate Champion has also started peddling her goods online under Instagram handle @sellinglotteheirlooms. Emerald City spied an Alessandra Rich polka-dot dress for the bargain price of $750 – a steal when they retail for well over $1000. 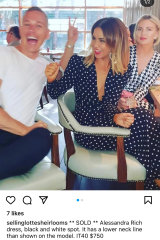 Toggs and Champion aren’t the only thrifty fashionistas recycling their wardrobes.

Socialite and influencer Montarna Pitt (nee McDonald) and sister Madison look to have made a killing reselling gear from their designer wardrobes, creating a dedicated Instagram account offering up an array of pieces from high street label Zara to Camilla and Marc.

In April Emerald City revealed chook heiress Jessica Ingham had taken to Instagram to offload her ‘pre-loved’ designer wardrobe. Perhaps she took her cues from her ex-bff Roxy Jacenko who has long sold on her designer gear to her legion of followers.

After a US jury found Amber Heard guilty of defaming her ex-husband Johnny Depp in an article where had she claimed she was a victim of domestic abuse, online trolls have taken it upon themselves to hit out at anyone who has publicly stood up for Heard.

The Hollywood stars, who divorced in 2017, presented conflicting versions of their doomed relationship in the trial.

It’s been more than two years since Australian human rights barrister Jennifer Robinson represented Heard during Depp’s 2020 libel case against The Sun newspaper in London. However, Robinson continues to be inundated with vile messages and even death threats from Depp mega-fans and internet trolls – and those messages amped up after the US Depp-Heard case concluded last week. 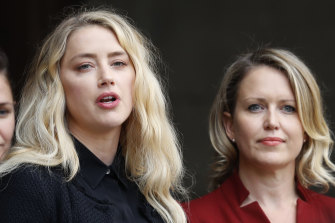 Amber Heard and Australian Human Rights Lawyer Jennifer Robinson have been subjected to internet trolls after Heard’s US trial.Credit:AP

The Southern Highlands-raised lawyer has been calling out the trolls who slide into her Instagram messages on a daily basis, naming and shaming them on her stories.

“Jen Robinson is an accomplished and brilliant lawyer. She is being unfairly subjected to gendered abuse for simply doing her job,” explains friend and fellow barrister Rebekah Giles.

Robinson is no stranger to public harassment, in the past 10 years her professional involvement with client Julian Assange has led to death threats, surveillance and an attempt to stop her boarding a plane at Heathrow Airport.

In the UK, Robinson is known as the go-to barrister for the rich and famous and been described by You Magazine as “fast making a name for herself as one of the world’s hottest lawyers”. She’s certainly not short of high-profile friends who include fellow barrister Amal Clooney and author Kathy Lette.

Last week jurors awarded Depp – who denied abusing Ms Heard – $15 million (USD) in compensatory and punitive damages while Heard won one of three counter-claims against Depp, and was awarded $2 million in compensatory damages. 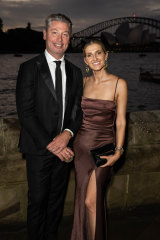 The Sydney glamour couple will retun to Taormina where they tied the knot 10-years-agoCredit:Jamesw Gourley

As an arctic chill blew into Sydney last week, the city’s social set were busy laying out their beach club attire and packing their Louis luggage for their delayed jaunt to Europe. Racing royalty Kate Waterhouse and rugby league great husband Luke Ricketson are set to celebrate their wedding anniversary in Italy where they tied the knot 10 years ago.

“We are going to celebrate our wedding anniversary by taking the kids back to where we got married,” Kate told Emerald City last week.

“On our wedding anniversary date we are going to visit the church where we got married and then we have booked lunch at the Hotel Timeo (where we had our reception) for some family and friends who are also visiting Taormina (Sicily) at the same time,” she added.

But before the couple kick up their heels in Italy they will be celebrating alongside a number of Sydney pals as fashion influencer Nadia Fairfax-Wayne and husband Michael Wayne celebrate their nuptials a second time – with 40 odd friends.

Queen bees Deborah Symond O’Neil and Montarna Pitt will be there on their “matemoon” after both welcoming their second child and a number of pals from the Fairfax-Wayne inner circle will be joining the European celebration in Turkey.

The social set are understood to be staying at the majestic Macakizi hotel in Bodrum where the luxury resort is managed by Andrew Jacobs, godfather to the bride.

One lucky couple got out of the Harbour City well ahead of the cold snap. Former Married At First Sight couple Martha Kalifadtidis and Michael Brunelli left for Italy in April after experiencing a mould plague in their Bondi rental.