Sydney banker suspected his company was ‘being extorted’, court told

A former head of Macquarie Private Bank told a media adviser he suspected his company was being "extorted" by an Australian-based Chinese news outlet after he rejected an offer to enter into a $40,000-a-year sponsorship deal with the media company, the Federal Court has heard. 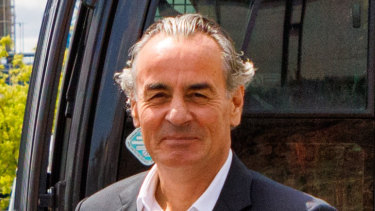 Mr Hedley says the article also accused him of running a company that "operates an illegal Ponzi scheme".

Atlas Advisors, a small company exempt from legal restrictions in Australia on larger companies suing for defamation, is also suing the media outlet over the same claims.

The media outlet denies the allegations are conveyed by the article.

Corporate and media consultant Simon Dulhunty gave evidence on Thursday that a "distressed" Mr Hedley called him after the article was published.

He said Mr Hedley said words to the effect of "it seems as if we are being extorted for not paying the $40,000", a reference to a previous offer by AFN for Atlas to enter into a sponsorship arrangement with the news outlet in return for articles and advertisements on its website and participation in events such as forums.

Asked by the barrister for AFN, Peter Gray, SC, if Mr Hedley used the word "extorted", Mr Dulhunty replied: "To the best of my recollection."

The Federal Court has heard the article, published on AFN's website, was also distributed and read widely on Chinese social media platform WeChat.

David Han, a director and secretary of AFN who is also being sued, gave evidence on Thursday that he did not believe he had done anything wrong but had been "forced" to remove the article online.

Asked about the timing of the article being published just over a month after the $40,000 sponsorship deal was rejected, Mr Han said: "You can't put [the] two things together."

He said he did not write the article and did not read it before it was published.

"Are you saying you published this lengthy article … without looking at it at all?" Mr Hedley's barrister Sue Chrysanthou said.

Asked if he wrote the headline for the article, he said "in some senses, yes". Mr Han said the author told him what the article would be about some weeks before it was submitted and he composed a headline without reading the finished product.

"A lot of articles, we don't have much chance to read it," he said.

"It's impossible for you to have come up with that title just based on … [the previous conversation]," Ms Chrysanthou suggested.

Mr Han replied that he searched Google for keywords and put the headline together based on the results.