The Prime Minister and his Treasurer have made much of how their actions in addressing the economic impact of the coronavirus are about "building a bridge to the other side". They want to ensure as many Australians as possible make it through the health crisis, all too aware about the enormous economic hit we will all take. 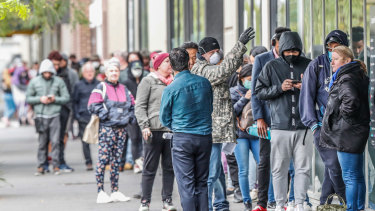 A queue outside a Centrelink office in South Melbourne last week.Credit:Jason South

What's less clear is what awaits us on the other side of that bridge and the sobering reality of how we pay for it. The size of the economic packages is gobsmacking but underlines the severity of the situation for anyone still in doubt. At more than $220 billion, they represent some 16 per cent of the country's total economic output for a year.

Make no mistake this spending is necessary to protect lives. Hundreds of thousands are out of work. Businesses have gone to the wall. The Prime Minister has noted some economies and countries may not survive. He wants to make sure Australia won't be one of them.

There is minimal political dissent. What seems like a lifetime ago, just the end of last year in fact, the government made much of its diligence in addressing Labor's spending from the global financial crisis and its work over seven years to bring the budget back to near balance. The shoe is now firmly on the other foot.

Australians must first brace themselves for difficult weeks ahead, weeks of distressing news concerning the health crisis as hospital cases and deaths are expected to peak. But what awaits the country on the other side of an economic shutdown is the reality of rebuilding a society where many lives and livelihoods will probably have been lost.

A government that has put people front and centre on this side of the bridge faces the same issue once we're on the other side. But on the other side there is the reality of responsible fiscal management in a society rocked to its core.

Orthodoxy says that as things normalise taxes should go up and spending come down to tackle the enormous budget deficit. But what if normal growth doesn't re-emerge? How do we raise taxes and cut spending? Who has to carry the greatest burden? The experience of Greece and Italy to name but two of the weaker European countries after the global financial crisis was that austerity measures alone do not work.

No doubt when politics resumes from its coronavirus hibernation there will be jostling, posturing, even lobbying around who pays and how. All the usual suspects will emerge – taxing the rich, franking credits, land taxes, private school funding, stadiums, death taxes. So too there will come questions around profit-shifting multinational corporations, mining resources taxes and corporate tax regimes. Even generous political pensions will come under question.

On the other side of the ledger, there will probably be calls for greater investment in health, planning for future global pandemics, better education.

Many have been surprised by the immediate and generous response of some of Australia's corporate leaders who leapt into action to play their part in protecting the community, their businesses, and the strength of their customers for when they can once again go out and work and hopefully spend. But it would be naive to think some are not also hoping this is a downpayment in goodwill for when the day of financial reckoning comes. There is speculation the government will go down the path of taking a stake in businesses, nationalising key assets that can be later sold off for a return.

Get our Coronavirus Update newsletter for the day’s crucial developments at a glance, the numbers you need to know and what our readers are saying. Sign up to The Sydney Morning Herald’s newsletter here and The Age’s here.

It is too soon to contemplate meaningful answers on Australia's response to how to pay for this. We do first have to get as many as possible over to the other side. But everyone will have to play their part. And just as people are at the heart of the government's plans for a health crisis, so too they must be at the heart of economic rebuilding.