Tax breaks for big business, deregulation and wide-scale industrial relations reform will form part of the Morrison government's attempts to lift the nation out of the economic black hole caused by the global coronavirus pandemic.

Prime Minister Scott Morrison warned the COVID-19 crisis would hit the economy like "a truck" on Friday but ruled out introducing a temporary levy to begin paying down tens of billions of dollars in debt accumulated from its emergency response. 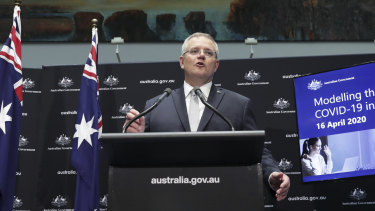 He has promised to fast-track new and existing major infrastructure projects and adopt an aggressive pro-business investment strategy ahead of the October budget to help the country claw its way out of an expected virus-induced recession.

"All I know is that the hit the Australian economy is taking is the biggest we have seen since the Great Depression," he told Melbourne's 3AW radio on Friday.

"The GFC was an entree compared to what this is, this is on a whole other level. On the economy we have some really bad news coming our way … this thing is going to hit like a truck."

Economists are forecasting a deficit for this financial year of at least $60 billion, blowing out to more than $100 billion in the next financial year.

The Reserve Bank of Australia and Treasury have warned the government's current economic policy framework was inadequate for the task ahead, with Mr Morrison this week leaving open the option of breaking election promises if need be.

Senior government figures on Friday flagged the potential return to cutting the company tax rate for big business and a possible aggressive overhaul of the nation's industrial relations framework.

In August 2018 the Coalition was forced to abandon its plan to cut the corporate rate to 25 per cent for firms with a turnover of more than $50 million because it could not secure the support of the Senate crossbench.

Mr Morrison warned Australians more bad economic news was to come but would not bow to the "inevitability" of an economic depression, saying programs such as the JobKeeper wage subsidy were designed to cushion the economic blow.

Ratings agency S&P Global, which now expects Australian unemployment to average 7.4 per cent this year and remain elevated until at least 2023, said the economies of the Asia-Pacific would change because of the virus outbreak.

"The structure of demand is likely to change – think less travel, more healthcare," he said.

Finance Minister Mathias Cormann promised on Friday the government would keep taxes "as low as possible" but "as high as necessary" to fund essential services.

"We are certainly not focusing on increasing the tax burden on the economy at a time when we want to pursue stronger economic growth and a strong economic bounce back on the other side," Senator Cormann told Sky News Australia.

Opposition Leader Anthony Albanese warned the federal government against a return to its "old ideological position of attacking the rights of working people".

"If the government's response post this crisis is to further undermine our unions and to attack wages and conditions of working people, then that will not help the recovery. It will not help growth," Mr Albanese said.

Get our Coronavirus Update newsletter for the day’s crucial developments at a glance, the numbers you need to know and what our readers are saying. Sign up to The Sydney Morning Herald’s newsletter here and The Age’s here.