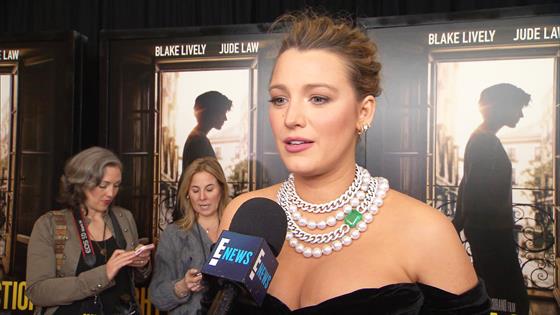 Ryan Reynolds appeared on Wednesday’s at-home edition of The Late Show With Stephen Colbert and revealed how he’s social distancing with his wife Blake Lively and their three kids amid the global coronavirus pandemic.

“So, that’s what I do,” he said via video chat. “This morning, I made dresses out of tissue paper, which was fun for them.”

He also said he and the 32-year-old actress are “doing a lot of homeschooling.”

“We’re lucky enough to have a little tiny garden,” he added. “So, we’re learning a little bit about gardening. We’re trying to make this an educational experience, but I’m mostly drinking.”

In addition, the Deadpool star, who also owns a spirits company called Aviation American Gin, said the Gossip Girl alumna is planning on giving him a haircut tomorrow.

“She’s done this once before,” he said. “It took two and a half hours. And then, at the end, it looked like she’d done the whole thing using only a lighter. Or, you know those gloves that are made of sandpaper? It would have been a little faster if she had just worn it down, [like] she had just rubbed my head until my hair disappeared.”

Reynolds said his mother-in-law has been staying with the family of five, as well.

“She’s been a lifesaver. It’s been incredible to have her here. She doesn’t know it, but actually she’s emergency food if this gets real,” he quipped at one point, later joking, “I will not hesitate to eat the children.”

Reynolds and Lively have also been giving back. For instance, they donated $1 million that was split between Feeding America and Food Banks Canada. They also donated $100,000 to each of the following four hospitals in New York: Elmhurst, NYU Hospital, Mount Sinai and Northern Westchester. In addition, they’re donating 30 percent of the proceeds from Aviation American Gin bottle sales to bartenders until May 1. In addition, Reynolds’ wireless carrier company, Mint Mobile, is providing customers with free unlimited data until May 14.

To hear the rest of the interview—including details about Reynolds’ and Stephen Colbert‘s first auditions (spoiler alert: the late-night host’s was for Saved by the Bell)—watch the videos.