Home » Lifestyle » ROBERT HARDMAN: Charles beamed in from his armchair to open hospital

ROBERT HARDMAN: Charles beamed in from his armchair to open hospital

ROBERT HARDMAN: Prince Charles beamed in from his armchair to open the 4,000 bed Nightingale Hospital in east London – but only after topping up the 40 minute basic Zoom service

This will, surely, go down as one of the most memorable achievements in the history of the National Health Service.

It was certainly marked by one of the more memorable opening ceremonies in the long plaque-unveiling history of the House of Windsor.

Thus it was that the Prince of Wales opened the 4,000-bed Nightingale Hospital in east London yesterday – while sitting in his armchair in deepest Aberdeenshire. 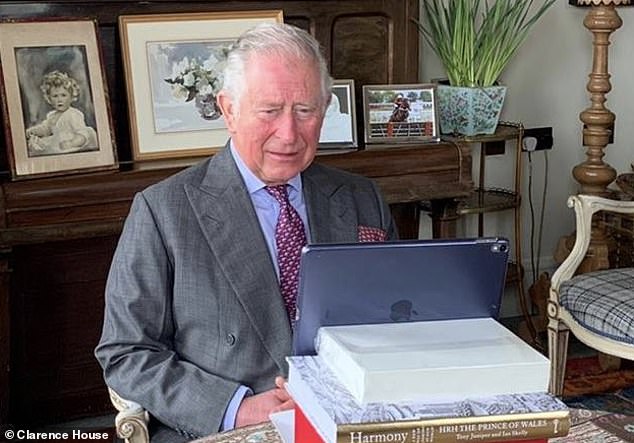 ‘It is without doubt a spectacular and almost unbelievable feat of work in every sense,’ declared the prince as he saluted all those involved in the ‘mass mobilisation to withstand the coronavirus crisis’.

It was just last week that the virus laid low the prince himself, although he appeared fully recovered as he spoke on a video screen in front of what is now Europe’s largest hospital.

Just nine days ago, this had been the ExCeL conference centre, its one million square feet reserved for the ‘National Wedding Show’ which should have been kicking off at 9am today.

As of now, it will be the epicentre of the greatest peacetime emergency in modern times.

‘An example, if ever one was needed,’ the prince continued, ‘of how the impossible can be made possible and how we can achieve the unthinkable through human will and ingenuity.’ 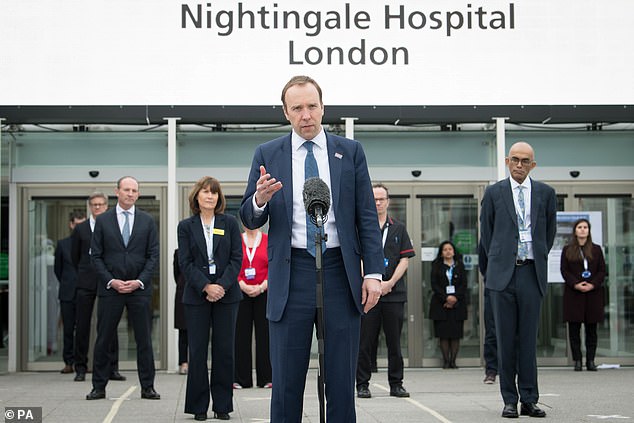 Just nine days ago, this had been the ExCeL conference centre, its one million square feet reserved for the ‘National Wedding Show’ which should have been kicking off at 9am today

Standing 6ft apart, like chess pieces, the watching VIP greeting party was led by the Health Secretary, Matt Hancock, himself on the mend from by a mild dose of Covid-19.

The clinical functionality of this sanatorium-cum-spaceship could hardly have been in greater contrast to the homely sight of the prince in his drawing room at Birkhall.

Here was an avuncular figure in a favourite old suit, surrounded by family photos, tartan, fresh flowers and some of his grandmother’s favourite bits and bobs.

Through the long widowhood of the Queen Mother, Birkhall was her refuge on the Balmoral estate. The young Prince Charles loved Granny’s home every bit as much as the 71-year-old Prince Charles loves it now. The Spy cartoons are still on the wall.

The old piano, on which the Queen Mother’s musical lady-in-waiting, Ruth, Lady Fermoy, would entertain the guests, is still there. Among the photographs on top of it these days is one of the prince with his sons at the centenary of the Royal Air Force and a black and white portrait of the prince with his grandson, Prince Louis.

Royal Kremlinologists might enjoy looking for hidden meaning in the precise positioning of various photos but, in fact, many are not royal at all.

This is the Duchess of Cornwall’s drawing room, too, after all. In pride of place is a picture of her beloved late brother, Mark Shand, and a portrait of a Parker Bowles family christening.

In any case, royal aides were not worried about the backdrop. They were far more concerned about establishing a safe wi-fi connection. 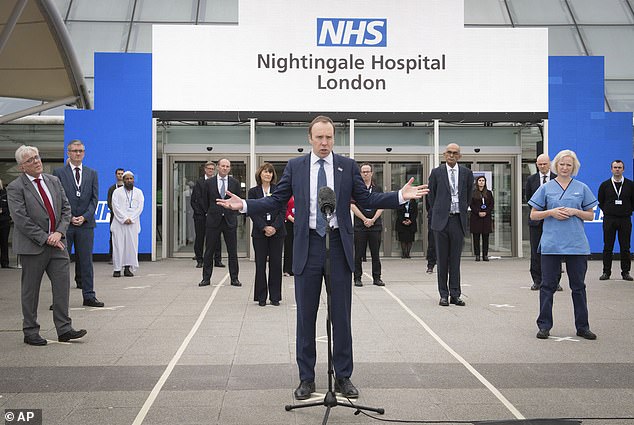 Standing 6ft apart, like chess pieces, the watching VIP greeting party was led by the Health Secretary, Matt Hancock, himself on the mend from by a mild dose of Covid-19

The prince was addressing the nation via a staff laptop logged on to the video conference website, Zoom. Royal Deeside is not blessed with the most reliable internet connections.

And Charles, by his own admission, is still somewhere in the tech Stone Age. There is no resident IT boffin at Birkhall, which remains firmly sealed off with a skeleton crew of domestic staff.

Though a link had been established in good time, it was suddenly pointed out that the basic Zoom service cuts out after 40 minutes (unless you pay extra).

‘So we made sure we topped up the meter,’ said a source. The prince had written the speech himself. Even his private office were not entirely sure what was coming.

‘The name of this hospital could not have been more aptly chosen,’ he went on, still with a hint of a croak.

‘Florence Nightingale, The Lady with the Lamp, brought hope and healing to thousands in their darkest hour. In this dark time, this place will be a shining light.’

No one has had more experience of ribbon-cuttings and tree-plantings than the Royal Family.

The Duke of Edinburgh has sometimes described himself as ‘the world’s most experienced plaque-unveiler’.

The Queen herself has performed some notable openings during her long reign. She unveiled the modern telephone network, she was the first world leader to send an email, and she opened the 2012 Olympics. But even she has never had to unveil a plaque from 500 miles away.

‘The wonders of modern technology can only do so much – and I can’t quite reach,’ the Prince of Wales concluded. ‘Perhaps I could invite Nightingale’s head of nursing, Natalie Grey, on my behalf, to unveil the plaque to declare N.H.S. Nightingale Hospital, open!’

Yesterday’s event was also unique for one other reason. This was the first time any royal had opened a hospital in the fervent hope that, as soon as possible, they will be invited back to close it again.