A former Chinese military officer who sent tonnes of protective equipment from Australia to China during the height of the Wuhan coronavirus outbreak has been accused of profiteering from the disaster, with medical supplies allegedly inflated in price by up to 300 per cent. 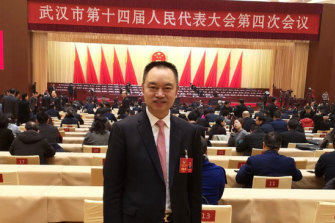 Leaked documents allege that Mr Kuang’s sale price to Risland of $25 for each item was far higher than market value, with identical items on sale in Australia at the time for $10 or less. If the mark-up quoted in the warnings to Risland is correct, Mr Kuang could have made more than $1 million in clear profit.

The documents show that several insiders issued warnings to senior executives at Risland in late February and early March of the alleged profiteering in connection with the COVID-19 humanitarian work. There is no suggestion that Mr Kuang committed any criminal offences.

The documents include comparisons of the true price of the goods.

Mr Kuang, who has deep ties to the Chinese Communist Party, has not responded to multiple efforts to contact him while Risland’s chief executive, Dr Guotao Hu, said he didn't know if his company had been overcharged because he was "running real estate" and had no knowledge of what medical goods should cost.

On Wednesday, The Age and The Sydney Morning Herald revealed that in February, Mr Kuang had helped co-ordinate several airlifts of medical supplies from Australia to Wuhan, the city at the epicentre of the crisis, and had called on "overseas Chinese in Australia to take action to contribute money, supplies and your kindness to your home country".

Under the changes, Australian Border Force will be given the power to require that goods already in hoarders' custody be surrendered for provision to the national medical stockpile or destroyed if they are defective. A further ban on price gouging would be introduced to prevent people who have purchased essential goods at retail stores on-selling them at extortionate prices.

"These measures have become necessary because we have seen a small number of individuals engaging in the bulk purchasing of essential goods from retail outlets in Australia with the intent of profiteering from exploitative exporting and price gouging," Mr Dutton said. "These goods are essential to preventing the spread of COVID-19."

Between March 18 and March 30, more than 69,000 face masks were seized from about 440 consignments bound for overseas. There have also been 30 consignments containing various disinfectant products including sanitiser and wipes, and five shipments with other personal protective equipment such as gloves and masks. 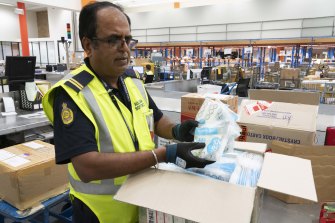 Border Force has increased its scrutiny of medical equipment leaving the country.

Government sources have confirmed that Australian authorities are now closely examining Mr Kuang’s operation, including whether he has failed to disclose his relationship with Chinese government agencies.

In an unconnected case, Sydney-based medical supplier MediBC has told The Age and Herald it is being targeted by apparent profiteers using multiple fake credit cards and email addresses in an attempt to mass purchase face masks for resale.

The owner of MediBC, Michael Randall, called on authorities to take action but said he was unsure if local police had the capacity to protect the integrity of the medical supply business. Invoices and emails reviewed by The Age and Herald suggest MediBC has been targeted by an organised crime operation.

Mr Randall said an online payment provider was failing to take appropriate action to protect the integrity of medical supply chains from criminal elements, but that his group was trying to limit its sales of its brand hand sanitiser.

"I’m speaking out because I want to see vital products going to those who need them," Mr Randall said. 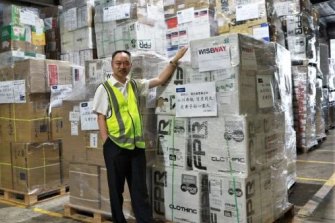 Mr Kuang’s operation to export medical equipment to China in February and March has relied on the goodwill and patriotism of altruistic Chinese Australians to combat the fallout of COVID-19 in China and Australia.

But documents he filed with corporate regulator ASIC and invoices he issued for protective gear suggest Mr Kuang also sought to profit, including by setting up a new company to export foodstuff to China. Mr Kuang appears to have been intent on assisting China’s soft power and political influence goals in this country by burnishing the CCP’s image as a global power helping other nations.

Sydney-based Mr Kuang runs a number of Chinese Communist Party-backed organisations in Sydney and Melbourne. These organisations include some that are loosely backed by China's soft-power agency, the United Front Work Department, which is charged with building influence for the CCP overseas and countering its critics.

Statements issued by Mr Kuang or his backers to Chinese language media outlets reveal that since February, he has sought to merge several United Front groups to form a mega "alliance" able to draw on "support from the Chinese embassy in Canberra". The statements also show Mr Kuang follows directives from officials of the party-state about what he should export to China and import into Australia.

The Age and Herald confirmed on Wednesday that the Attorney-General's Department is currently looking into whether Mr Kuang needs to register as an agent of foreign influence. The department is also assessing whether some of the groups Mr Kuang is associated have obligations under the Foreign Influence Transparency Scheme.

Meanwhile a Chinese academic has blasted the Australian media, including The Age and the Herald, for reporting on businesses which sent medical supplies to Wuhan during the height of the crisis.

In a piece published in Chinese state media organ Global Times, the director of the Australian Studies Centre, Chen Hong, said the reports "maliciously distorted facts and context by unfairly and falsely correlating the early-stage emergency aid to Wuhan by some businesses in Australia, to the current shortage of masks and other sanitising and medical supplies in Australia".