The unique adaptation was spotted in a fossil of the smallest known ichthyosaurs species, called Cartorhynchus lenticarpus.

Little is known about these extinct animals but experts think they are ‘more closely related to crocodiles and dinosaurs than they are to lizards and snakes’. 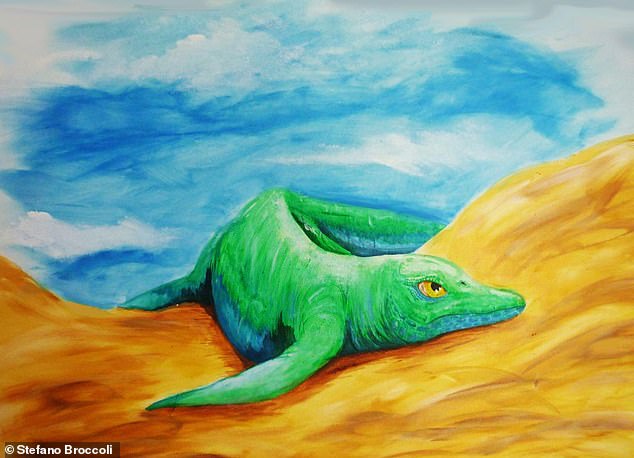 Pictured, an artist#s reconstruction of what Cartorhynchus may have looked like in life. Little is known about these extinct marine predators but experts think they are ‘more closely related to crocodiles and dinosaurs and birds than they are to lizards and snakes#

At 1.5ft long, Cartorhynchus is the smallest known ichthyosaur and may have lived on land and in the sea. Its fossil remains were found in Anhui province, China, and analysis of the specimen revealed it lived at the start of the Triassic period about 248 million years ago

While scanning the fossil, which was found several year ago in China, scientists discovered unusual pebble-like teeth hidden in its short snout, with signs of wear and tear.

The teeth may have been used for crushing the shells of snails and clam-like molluscs known as bivalves, the researchers said.

At 1.5ft long, Cartorhynchus is the smallest known ichthyosaur and may have lived been one of the first reptiles to live on land and in the sea.

Ichthyosaurs – meaning fish-lizards – ranged greatly in size and could grow up to 30ft (nine metres) long.

Most ichthyosaurs had long beak-like snouts but smaller species has a short nose which experts initially believed helped it feed as a suction feeder.

Olivier Rieppel, a palaeontologist at the Field Museum in Chicago and one of the study authors, said: ‘By studying this early ichthyosaur’s unusual rounded teeth, we get a better understanding of how these animals evolved and what their lifestyles were like.

‘When we first described Cartorhynchus, we thought that it didn’t have any teeth at all and was a suction feeder. But later on, researchers realised that it did have some teeth further back in its jaws.’

The creature was adapted to life on land and also on the water due to large flippers as well as flexible wrists which allowed it to swim and also to plod along the ground.

Its body also contained thicker bones than other ichthyosaurs. This supports the theory that most marine reptiles that left the land first grew heavier to help them swim through rough coastal waves.

Mr Rieppel said: ‘Ichthyosaurs became creatures of the open ocean, but the smaller species like, Cartorhynchus, probably lived closer to the shore and picked up invertebrates to eat from the sea floor.’ 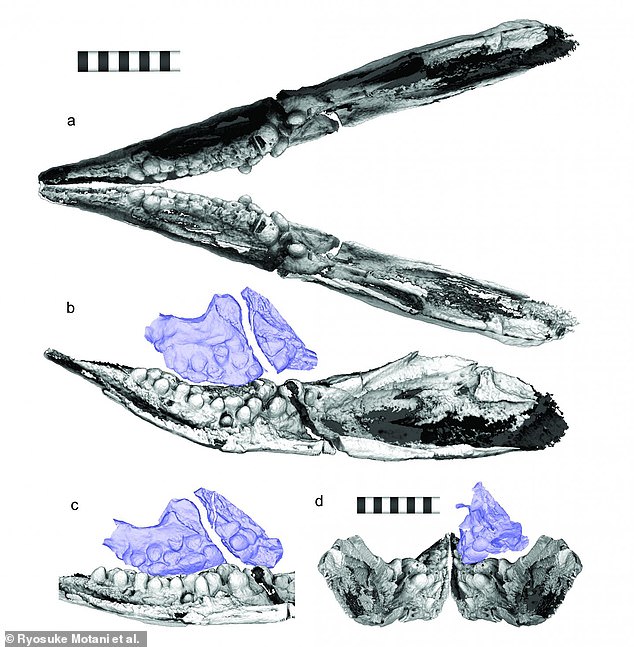 CT scans (pictured) of the Cartorhynchus fossil showed pebble-shaped teeth hidden from view. The teeth in its upper jaw are highlighted here in purple

The researchers compared Cartorhynchus to other early ichthyosaurs and found rounded teeth cropped up in several other species.

This suggests the trait evolved independently more than once rather than from one common ancestor, they said.

Cartorhynchus lived about four million years after the worst mass extinction in history, known as the Permian-Triassic extinction, which wiped out 96% of species and may have been linked to global warming.

Mr Rieppel said: ‘There were no marine reptiles prior to the Triassic.

‘That’s what makes these early ichthyosaurs so interesting – they tell us about the recovery from the mass extinction, because they entered the sea only after it.

‘By gaining a better understanding of how these ichthyosaurs evolved, we get a better sense of how life rebounds after extinctions, and that lesson is still relevant today.’

The findings are published in the journal Scientific Reports.

Ichthyosaurs were a highly successful group of sea-going reptiles that became extinct around 90 million years ago.

Often misidentified as swimming dinosaurs, these reptiles appeared before the first dinosaurs had emerged.

They evolved from an as-yet unidentified land reptile that moved back into the water.

The huge animals, which remained at the top of the food chain for millions of years, developed a streamlined, fish-like form built for speed.

Scientists calculate that one species had a cruising speed of 22 mph (36 kmh).

The largest species of ichthyosaur is thought to have grown to over 20 metres (65 ft) in length.

The largest complete ichthyosaurus fossil ever discovered, at 3.5 metres (11ft), was found to have a foetus still inside its womb.

Scientists said in August 2017 that the incomplete embryo was less than seven centimetres (2.7 inches) long and consisted of preserved vertebrae, a forefin, ribs and a few other bones.

There was evidence the foetus was still developing in the womb when it died.

The find added to evidence that ichthyosaurs gave birth to live young, unlike egg-laying dinosaurs.

Related posts:
Housebuyers plan rural retreat after lockdown
Zoe Ball: Radio 2 star sends special message to boyfriend after ‘uppy ups and downy downs’
Popular News
Coronation Street’s Samia Longchambon keeps it casual on sunny walk with daughter Freya, 10, and family dog
18/09/2020
Stuart Broad builds up to second Virtual Test with Sri Lanka
26/03/2020
Bindi Irwin Made Last-Minute Changes to Her Wedding Due to Coronavirus Lockdown
26/03/2020
Widow on The Repair Shop leaves viewers sobbing
26/03/2020
Coronavirus lockdown: Global quarantine reveals weird fact about humanity
26/03/2020
Recent Posts
This website uses cookies to improve your user experience and to provide you with advertisements that are relevant to your interests. By continuing to browse the site you are agreeing to our use of cookies.Ok