Controversial union boss John Setka did not breach internal rules when he 'poached' more than 200 members from a rival faction. 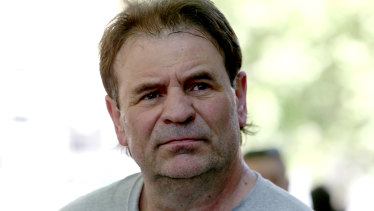 A court case against union boss John Setka has been dismissed.Credit:AAP

Mr O'Connor argued in the Federal Court in Melbourne that Mr Setka and 29 other officials breached the organisation's rules when it took members to join the construction arm.

But the case was dismissed on Monday, with Justice David O'Callaghan finding the union rules hadn't been breached.

How the manufacturing division interpreted rules around union amalgamation, division restructure and membership transfer were labelled "improbable" by the justice.

"In my view … the construction of the national rules contended for by the respondents is to be preferred," Justice O'Callaghan decided.

Since August last year, there had been 219 resignations from Mr O'Connor's manufacturing branch and they moved to Mr Setka's construction branch, the court was told in February.

But the controversial construction union boss said the decision confirmed workers belonged in his division.

"It is a shame that this matter had to be resolved in court. Matters such as these should be resolved within the union having regard to the wishes of members," Mr Setka said in a statement.

"It's not about politics, it's about representing our members and fighting for a safe industry," he added on social media.

The latest legal drama within the union comes after Mr Setka was forced out of the Labor Party in August last year following comments about family violence campaigner Rosie Batty.

He also pleaded guilty to harassing his wife, but controversially kept his union position.