Despite protesting his innocence, Peru’s president accepted the decision to remove him and said he would not legally challenge it.

A 24-year-old man has been arrested in Peru for punching a politician live on television.

Congressman Ricardo Burga was speaking to a media scrum outside government buildings in Lima on Monday shortly after he voted to impeach President Martín Vizcarra, who was removed from power.

Apparently unhappy with this, Carlos Ezeta managed to make his way through the crowd of reporters to deliver a nasty right overhand to the side of his head — all in front of the rolling TV cameras.

Footage shows security scrambling to restrain the assailant, too late to save the opposition member from a sore head; La Republica reported he suffered nose bleeds and even lost consciousness, and was taken to a local medical facility for treatment.

Ezeta, still in possession of his phone, posted a selfie on his Instagram, telling followers he was fine, and that he didn’t “have any weapons or anything.”

“I did not think that the night would end like this. It is the first time I step into a police station where I will spend the night. They will ask me for my cell phone shortly,” he wrote.

“They are accusing me of resistance to authority and it is false. I am collaborating with the police. I’m fine.”

Ezeta faces up to six months in prison if convicted.

The South American country has been thrown into political upheaval with the removal of the President, who managed to survive a first impeachment attempt over corruption accusations just a two months ago — but not the second.

Accused of accepting bribes for government contracts, 105 out of 130 members of congress voted in favor of his removal — far beyond the 87 needed.

Despite branding the accusations as “baseless” and “false”, Vizcarra said he would accept Congress’s decision and would not legally contest it… a stark contrast to certain other leaders on the northern side of the continental landmass.

“Today I am leaving the presidential palace,” he said in a speech on Monday, per CNN. “Today I am going home.” 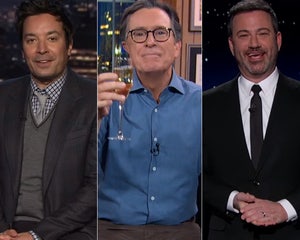 Related posts:
Lorraine Kelly apologises after ITV viewer points out issue ‘You are absolutely right’
Brie Larson on Self-Care, Scent, and Channeling the Confidence of Her Role in Captain Marvel
Popular News
Patrice Evra trolls Ashley Young over bird 'pooing in his mouth' as he wishes Man Utd manager Solskjaer happy birthday
27/02/2021
Stuart Broad builds up to second Virtual Test with Sri Lanka
26/03/2020
Bindi Irwin Made Last-Minute Changes to Her Wedding Due to Coronavirus Lockdown
26/03/2020
Widow on The Repair Shop leaves viewers sobbing
26/03/2020
Coronavirus lockdown: Global quarantine reveals weird fact about humanity
26/03/2020
Recent Posts
This website uses cookies to improve your user experience and to provide you with advertisements that are relevant to your interests. By continuing to browse the site you are agreeing to our use of cookies.Ok