Human ancestors who lived over three million years ago had an ape-like brain structure but human-like brain growth that showed prolonged periods of care.

The findings are based on analysis of eight fossil skulls of Australopithecus afarensis – the species to which the famous early human ancestor ‘Lucy’ belongs.

A. afarensis inhabited East Africa more than three million years ago and is widely accepted to be an ancestor to all later hominins, including the human lineage.

Remains of both Lucy and ‘the Dikika Child’ show the brain of this early species was organised like that of an ape, but grew over time at a rate more comparable to humans. 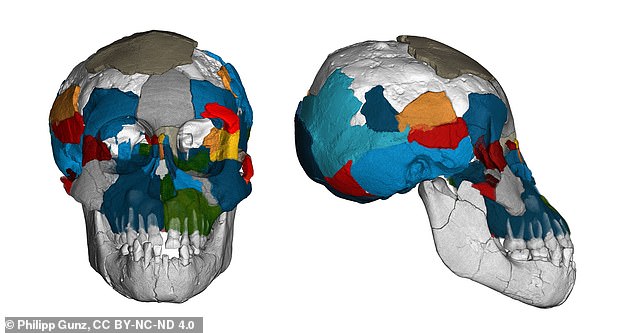 ‘This fossil has played a pivotal role in allowing paleoanthropologists to ask and answer several major questions about how we became human,’ said senior author Zeresenay Alemseged, a paleoanthropologist from the University of Chicago.

‘We can now say the organisation of the brain was more ape-like.’

A.afarensis inhabited East Africa more than three million years ago, and is widely accepted to be ancestral to all later hominins, including humans.

The researchers used scanning technology to analyse the skull of ‘the Dikika Child’, also known as Selam, that lived in Ethiopia 3.3 million years ago, as well as scans of Lucy and other fossils from Hadar in Ethiopia.

The Dikika Child’ – the remains of which were discovered in Dikika, Ethiopia in 2000 – is the earliest child ancestor discovered so far.

She belonged to the same species as Lucy, the famous fossil discovered in Hadar in Ethiopia in 1974 – and a forebear of Homo sapiens.

Years of fossil reconstruction, and counting of dental growth lines, yielded an fairly well-preserved brain imprint of the Dikika Child, and a precise age at death.

Based on analysis of her dental records, the team’s experts calculated an age at death for the little female of just 861 days (2.4 years). 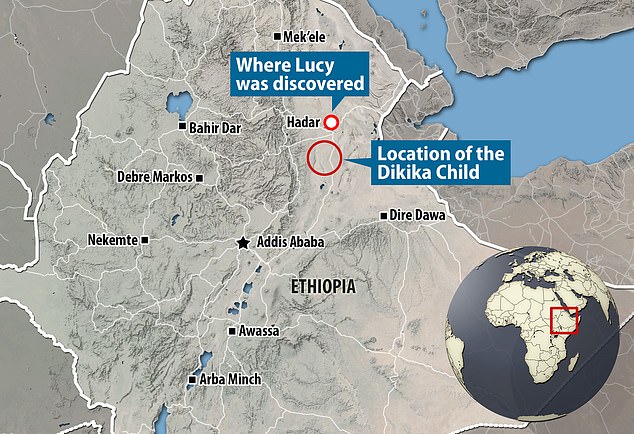 The research team used scans of Lucy (remains found at Hadar in 1974) and the Dikika Child (found in Dikika 2000), as well as other fossils from Hadar in Ethiopia 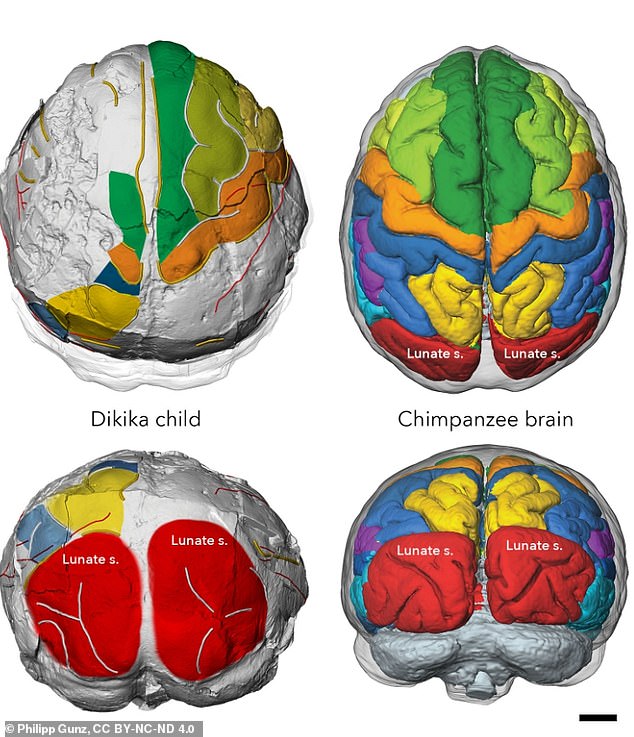 Brains do not fossilise, but as the brain grows, the tissues surrounding its outer layer leave an imprint in the bony braincase. The Dikika child’s endocranial imprint reveals an ape-like brain organisation, as shown above, and no features derived towards humans

However, a comparison of infant and adult specimens indicated more human-like protracted brain growth, which was likely critical for the evolution of a long period of childhood learning in hominins.

‘By understanding childhood emerged 3.5 million years ago, we are establishing the timing for the advent of this milestone event in human evolution,’ said Professor Alemseged.

‘As early as 3 million years ago, children had a long dependence on caregivers.

Brain imprints (in white) in fossil skulls of the species Australopithecus afarensis shed new light on the evolution of brain growth and organisation. Fossil reconstruction, and counting of dental growth lines, gave a preserved brain imprint of the Dikika Child

While brains do not fossilise, they leave imprints on the inside of the skull, which can reveal information about the structure and development of the organ.

Analysis of these brain imprints revealed key differences in the structural organisation of human and A.afarensis brains.

For example, the team found the placement of a fissure that separates the anterior and posterior parts of the brain closer to the front of the brain in A.afarensis, like chimpanzees.

‘Lucy’ is the fossil remains of a female Australopithecus afarensis, one of the oldest early humans.

Lucy was unearthed from a palaeontological dig site called Hadar, in northern Ethiopia, in 1974.

The remains — which comprise 40 per cent of a complete skeleton — have been dated to 3.2 million years ago.

She had a small skull and walked upright — although some experts believe she may have spent time dwelling up trees as well.

In 2016, researchers proposed that Lucy may have died falling out of a tree.

In humans, this fissure – called the lunate sulcus – is pushed further down in the brain.

The researchers calculated the endocranial volume, or brain mass, of the A.afarensis infant and found evidence of a prolonged period of brain development compared with chimpanzees.

They believe brain growth in A.afarensis was long-lasting, suggesting their children, like those of modern humans, had a long dependence on caregivers.

The 3.2 million-year-old ape Lucy was the first A.afarensis skeleton ever found and is considered to be the world’s most famous early human ancestor.

‘They walked upright, had brains that were around 20 per cent larger than those of chimpanzees, may have used sharp stone tools.

‘Our new results show how their brains developed, and how they were organised.’

The findings are published in the journal Science Advances.

WHEN DID HUMAN ANCESTORS FIRST EMERGE?

The timeline of human evolution can be traced back millions of years. Experts estimate that the family tree goes as such:

A recreation of a Neanderthal man is pictured

4 million years ago – Ape like early humans, the Australopithecines appeared. They had brains no larger than a chimpanzee’s but other more human like features

2.7 million years ago – Paranthropus, lived in woods and had massive jaws for chewing

2.3 million years ago – Homo habilis first thought to have appeared in Africa

400,000 years ago – Neanderthals first begin to appear and spread across Europe and Asia