Home » Lifestyle » Older, wiser, faster: Ariarne Titmus is ready for her next chapter

Older, wiser, faster: Ariarne Titmus is ready for her next chapter 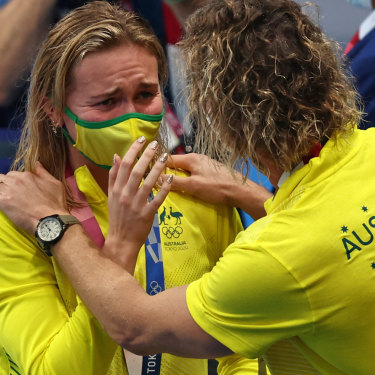 The tendency is to imagine Dean Boxall bounding up and down the side of a swimming pool, barking out instructions and urging his athletes ceaselessly onwards until they can barely lift their arms out of the water or muster so much as a half-hearted flurry of kicks.

It’s a vision born from the Tokyo Games, where Boxall shot to global recognition as the uninhibited, larger-than-life coach of Ariarne Titmus, the double-Olympic champion who conjured the seemingly impossible by humbling American ace Katie Ledecky. 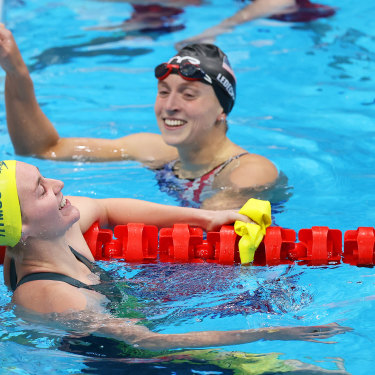 On this occasion, a rainy morning in Brisbane’s inner-west, Boxall is the one getting the dressing down. As she nears the end of her final set ahead of next week’s Commonwealth Games trials in Adelaide, Titmus admonishes him for – among other things – the rarity of contact between his straggly locks and a comb, as well as his inability to still pronounce her name correctly (it’s Ahh-ree-arne, for those playing at home, not Arr- ee-arne).

The dynamic is playful, respectful and has clearly evolved as Titmus, seemingly overnight, went from a teenage swimming prodigy trying to work out how to conquer the world to a confident, centred young woman with a refined sport-life balance and crystal-clear path to Paris 2024, where she hopes to repeat the dose.

As a duo, they are ready to unleash their next chapter and deliver some home truths to those who wondered if they flew too close to the sun in their unflinching pursuit of Olympic greatness.

TITMUS doesn’t mince words when asked about whether Boxall’s exuberant celebration after her 400m freestyle triumph in Tokyo somehow overshadowed her achievement on the world stage.

The majority of viewers and commentators saw his reaction as an unfiltered outpouring of emotion from a coach who wears his heart on his sleeve. Others perceived it as overbearing and the indicative of a mentor who wanted the moment for himself, not his star pupil.

Titmus fairly bristles at that idea, saying it showed a brazen lack of respect for what she had achieved and the work they had completed together in trying to beat a swimmer for so long thought to be untouchable.

“It was disrespectful to both of us for people to think that they have the right to make an opinion on who he is and who he is as a person, when they really have no idea,” Titmus said. 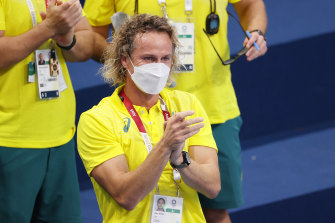 Boxall says Titmus has returned to the pool as a new person and a better swimmer than in Japan.Credit:Getty Images

“I know exactly what he’s like at training and I know how much work he’s put into it. So don’t shut someone down for achieving something great. It disrespected the partnership that we have, so whenever I get asked about that I shut it down.”

After the Games, the pair gave a number of interviews that shed some light on the intensity of Titmus’ training and the immense sacrifices she would make to battle through a shoulder injury and deliver 200m-400m gold for her nation.

If it sounded brutal at times, that’s because it was. The realities of elite sport aren’t always pretty and Titmus laid it bare, detailing the physical and mental devotion it took for her to stand atop the podium in Tokyo.

It also raised questions about whether they had pushed too hard, sacrificed too much at the altar of performance. Victory, yes, but at what personal and emotional cost?

“That’s a great question,” Boxall said when asked if he ever felt a line had been crossed. “Because I’ve reflected on that and I’m going to say no, because of what I’m seeing right now.

“I don’t know if the maturity was there but she still had to be zoned in at times. Now, after Tokyo, that’s just different. She’s different, she’s grown up. But I don’t think if I didn’t push as much – and she didn’t want to go there – the story might have been very different.”

I know exactly what he’s like at training and how much work he’s put into it. So don’t shut someone down for achieving something great.

For all of their efforts to keep a lid on the hype before the Olympics, the Ledecky vortex was inescapable. Like it or not, Titmus would be at the heart of one of the most-anticipated races of the Tokyo Games, against one of its most famous stars.

Even with the support of the successful Australian swimming machine behind them, there was an element of isolation. Both still believe nobody outside of their closest circle really understood the pressure they were under or the challenge they undertook.

“I can answer that clearly,” Boxall said. “The answer is no.”

Titmus concurred: “I don’t think it was every fully recognised.

“I would say I would compare Katie to Michael Phelps. I believe she’s the greatest female swimmer to have walked the earth and to be in the same conversation as her, even that is such an honour. But I don’t think many people really grasp what it took.”

THE year after an Olympics is often a down period for swimming. Titmus, like so many top-liners, won’t swim at the FINA World Championships in July and instead focus on the Commonwealth Games in Birmingham. 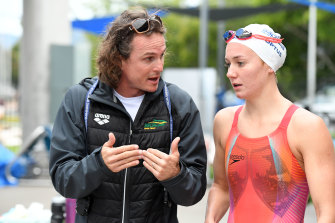 Boxall discusses strategy with Titmus ahead of next week’s national meet in Adelaide.Credit:Getty

Adelaide will be her first serious competitive outing since Tokyo and with so much pressure off her shoulders, she will be bounding towards the blocks with everything to gain and nothing to lose. No detail has been missed, including making sure the toenails are painted for the close-ups on the blocks.

Boxall considers her a far superior swimmer to the world-beater in Tokyo. She’s fit, healthy and, crucially, content with life in the water and on dry land. Success has allowed Titmus to expand her horizons and realise a simple coffee with friends won’t derail a month of work in the pool.

“That is something that’s definitely shifted. I’m still prioritising swimming but I don’t think that getting a coffee with my friend on a Wednesday is going to ruin tomorrow.

“I’m just in a different headspace.”

Titmus says the athlete-coach relationship has never been better. After the fires of Tokyo, both have welcomed the calmer waters ahead, beginning with trials, Commonwealth Games and potentially a rematch with Ledecky on home turf at the Duel in the Pool in Sydney in August.

“She’s done a very, very, very, very good job,” Boxall said. “She does exactly what is required, she’s balanced outside of the pool. I’ve barely had to push her at all since she’s been back.”

A happy athlete is a dangerous athlete. World records have fallen before when the weight has been lifted. Adelaide could yet spring some very welcome surprises.

News, results and expert analysis from the weekend of sport sent every Monday. Sign up for our Sport newsletter.